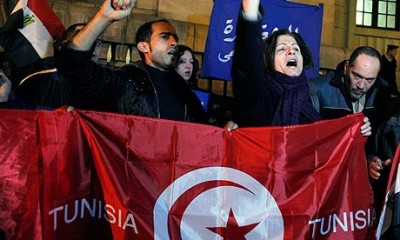 Bloodshed, tears, but no democracy. Bloody turmoil won’t necessarily presage the dawn of democracy. The end of the age of dictators in the Arab world? Certainly they are shaking in their boots across the Middle East, the well-heeled sheiks and emirs, and the kings, including one very old one in Saudi Arabia and a young one in Jordan, and presidents – another very old one in Egypt and a young one in Syria – because Tunisia wasn’t meant to happen. Food price riots in Algeria, too, and demonstrations against price increases in Amman. Not to mention scores more dead in Tunisia, whose own despot sought refuge in Riyadh – exactly the same city to which a man called Idi Amin once fled.

If it can happen in the holiday destination Tunisia, it can happen anywhere, can’t it? It was feted by the West for its “stability” when Zine el-Abidine Ben Ali was in charge. The French and the Germans and the Brits, dare we mention this, always praised the dictator for being a “friend” of civilised Europe, keeping a firm hand on all those Islamists.

Tunisians won’t forget this little history, even if we would like them to. The Arabs used to say that two-thirds of the entire Tunisian population – seven million out of 10 million, virtually the whole adult population – worked in one way or another for Mr Ben Ali’s secret police. They must have been on the streets too, then, protesting at the man we loved until last week. But don’t get too excited. Yes, Tunisian youths have used the internet to rally each other – in Algeria, too – and the demographic explosion of youth (born in the Eighties and Nineties with no jobs to go to after university) is on the streets. But the “unity” government is to be formed by Mohamed Ghannouchi, a satrap of Mr Ben Ali’s for almost 20 years, a safe pair of hands who will have our interests – rather than his people’s interests – at heart.

For I fear this is going to be the same old story. Yes, we would like a democracy in Tunisia – but not too much democracy. Remember how we wanted Algeria to have a democracy back in the early Nineties?

Then when it looked like the Islamists might win the second round of voting, we supported its military-backed government in suspending elections and crushing the Islamists and initiating a civil war in which 150,000 died.

No, in the Arab world, we want law and order and stability. Even in Hosni Mubarak’s corrupt and corrupted Egypt, that’s what we want. And we will get it.

The truth, of course, is that the Arab world is so dysfunctional, sclerotic, corrupt, humiliated and ruthless – and remember that Mr Ben Ali was calling Tunisian protesters “terrorists” only last week – and so totally incapable of any social or political progress, that the chances of a series of working democracies emerging from the chaos of the Middle East stand at around zero per cent.

The job of the Arab potentates will be what it has always been – to “manage” their people, to control them, to keep the lid on, to love the West and to hate Iran.

Indeed, what was Hillary Clinton doing last week as Tunisia burned? She was telling the corrupted princes of the Gulf that their job was to support sanctions against Iran, to confront the Islamic republic, to prepare for another strike against a Muslim state after the two catastrophes the United States and the UK have already inflicted in the region.

The Muslim world – at least, that bit of it between India and the Mediterranean – is a more than sorry mess. Iraq has a sort-of-government that is now a satrap of Iran, Hamid Karzai is no more than the mayor of Kabul, Pakistan stands on the edge of endless disaster, Egypt has just emerged from another fake election.

And Lebanon… Well, poor old Lebanon hasn’t even got a government. Southern Sudan – if the elections are fair – might be a tiny candle, but don’t bet on it.

It’s the same old problem for us in the West. We mouth the word “democracy” and we are all for fair elections – providing the Arabs vote for whom we want them to vote for.

In Algeria 20 years ago, they didn’t. In “Palestine” they didn’t. And in Lebanon, because of the so-called Doha accord, they didn’t. So we sanction them, threaten them and warn them about Iran and expect them to keep their mouths shut when Israel steals more Palestinian land for its colonies on the West Bank.

There was a fearful irony that the police theft of an ex-student’s fruit produce – and his suicide in Tunis – should have started all this off, not least because Mr Ben Ali made a failed attempt to gather public support by visiting the dying youth in hospital.

For years, this wretched man had been talking about a “slow liberalising” of his country. But all dictators know they are in greatest danger when they start freeing their entrapped countrymen from their chains.

And the Arabs behaved accordingly. No sooner had Ben Ali flown off into exile than Arab newspapers which have been stroking his fur and polishing his shoes and receiving his money for so many years were vilifying the man. “Misrule”, “corruption”, “authoritarian reign”, “a total lack of human rights”, their journalists are saying now. Rarely have the words of the Lebanese poet Khalil Gibran sounded so painfully accurate: “Pity the nation that welcomes its new ruler with trumpeting’s, and farewells him with hooting’s, only to welcome another with trumpeting’s again.” Mohamed Ghannouchi, perhaps?

Of course, everyone is lowering their prices now – or promising to. Cooking oil and bread is the staple of the masses. So prices will come down in Tunisia and Algeria and Egypt. But why should they be so high in the first place?

Algeria should be as rich as Saudi Arabia – it has the oil and gas – but it has one of the worst unemployment rates in the Middle East, no social security, no pensions, nothing for its people because its generals have salted their country’s wealth away in Switzerland.

And police brutality. The torture chambers will keep going. We will maintain our good relations with the dictators. We will continue to arm their armies and tell them to seek peace with Israel.

And they will do what we want. Ben Ali has fled. The search is now on for a more pliable dictator in Tunisia – a “benevolent strongman” as the news agencies like to call these ghastly men.

And the shooting will go on – as it did yesterday in Tunisia – until “stability” has been restored.

No, on balance, I don’t think the age of the Arab dictators is over. We will see to that.