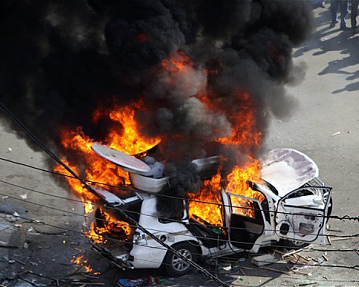 In what could be a seismic shift in international attitudes towards Israel’s illegal occupation of East Jerusalem, European diplomats are calling for strong action against Israeli policy in a secret document made public recently.

In the strongest indication to date of European disapproval of Israel’s continued expropriation of Palestinian land and homes in occupied East Jerusalem and eviction of Palestinian residents to make way for Jewish settlers, 25 European consuls based in Jerusalem and Ramallah have urged the EU to implement a series of counter-measures against current Israeli practices.

The confidential report was authored last month but only made public in the British daily ‘The Guardian’ several days ago, in wake of the demolition of the Shepherd Hotel in East Jerusalem, which was bulldozed to make way for Jewish apartments.

The report’s unprecedented recommendations to the EU’s main foreign policy body, the Political and Security Committee in Brussels, outlined the following steps: that East Jerusalem be treated as the capital of a future Palestinian state; that EU officials decline Israeli security in the eastern sector of the city; and that EU politicians refuse to visit Israeli government offices located beyond the Green Line.

Furthermore, the diplomats called for an EU presence at future Palestinian home demolitions and for diplomatic intervention in the event of arrests of non-violent Palestinian activists. Also on the agenda is the possibility of a list of violent Israeli settlers who would be refused entry to EU countries.

In addition, the report covers Israel’s continued human rights abuses and discrimination against Palestinians in East Jerusalem, and calls for a boycott of products from Israeli settlements.

However, Israel is continuing to defy international law and world opinion by constructing new housing units for Israeli settlers while evicting Palestinian residents.

Moreover, Israeli authorities have ramped up political intimidation of non- violent Palestinian and Israeli activists. Adnan Gheith, a Fatah leader from Silwan in East Jerusalem, together with other Palestinian activists, has appealed to European consulates for protection and asylum.

Gheith has been banished from the city for four months, after being accused of instigating political resistance. “I am being targeted for my political activism which is non-violent – but we will never accept Israeli occupation,” Gheith told IPS.

Fakhri Abu Diab, a spokesman for the Bustan Popular Committee in Silwan, was arrested and threatened with having his “tongue cut out” by Israeli police. His 16-year-old son, Anas, was also arrested.

Abu Diab’s family home is on Jerusalem Municipality’s list of homes to be bulldozed in the near future.

“We will not leave our homes and we will not be driven from our homeland. I would rather die than have my children homeless and living on the streets,” Abu Diab told IPS.

Jawad Siyam, the director of the Wadi Helweh Information Centre, which provides visiting journalists and diplomats with tours and up-to-date information on developments in Silwan, has once again been charged with “assaulting police” – despite an Israeli court having already dismissed an earlier charge on insufficient evidence.

On the other side of the Green Line, Israeli activists are facing persecution, as well. “But we suffer nowhere near as much as our Palestinian co-activists do. We still have the privilege of being Jewish,” Yonatan Shapira, an Israeli activist, told IPS.

Israeli members of Anarchists Against the Wall, as well as members of other groups, have been called in for interrogation by Israel’s domestic intelligence agency, the Shin Bet. The police attempted to search their homes by arriving on their property and trying to make their way into the homes but were refused entry. They later came back with search warrants.

Jonathan Pollack, a member of the anarchists group, has begun a three- month prison sentence. Pollack was charged with illegal assembly for his participation in a January 2008 Critical Mass Ride in Tel Aviv against the siege on Gaza. None of the other participants who were riding bicycles were arrested or charged.

Pollack, an Israeli spokesman for the Palestinian Popular Committees, was targeted due to his high-profile activity in West Bank demonstrations that have seen him repeatedly beaten and arrested.

Meanwhile, Israel’s foreign minister, Avigdor Lieberman, has accused leftist and human rights organisations of “supporting terror.” The Israeli Knesset (Israel’s parliament) has ordered an investigation into the funding of the groups, including Israeli Physicians for Human Rights (PHR) and the Public Committee Against Torture in Israel.

In a statement released to media, PHR responded to the investigation: “All our activities to promote a just and equal society are being carried out by devoted volunteers and physicians, and Lieberman can learn a thing or two from them about decency, humanity and democracy.”