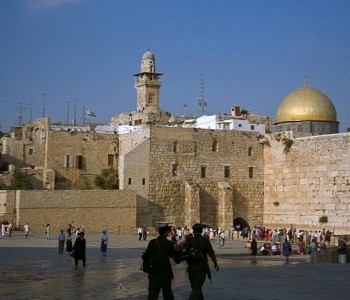 Emotions are running high in this working class town on the Mediterranean adjacent to Tel Aviv, the Israeli metropolis that has long been the symbol of liberal laissez-faire Israel. Principally, anti-Arab emotions: Racism is on the march.

A number of small, yet vociferous, anti-Arab demonstrations have taken place here recently in the wake of a national uproar triggered by a religious ruling signed by 50 rabbis forbidding the renting of homes by Jewish Israelis to “non-Jews”. The signing rabbis are from all around the country and from Jewish settlements in the occupied West Bank.

Their target is Israel’s Arab citizens who number 1.3 million, about a fifth of the Israeli population.

Bat Yam Mayor Shlomi Lahiani said that the latest demonstration by right-wing activists, that included members of the Knesset, Israel’s Parliament, and where there were calls to “keep Arabs out of our town”, amounted to “inciting hate and racism.”

“Arabs are equal citizens and must be treated as such,” Lahiani told IPS. Racist actions would “not be tolerated,” he declared.

Demonstrators have held up placards proclaiming “Jews, let’s win – daughters of Israel for sons of Israel.”

Since the issuing of the original document earlier this month, scores more rabbis added their names to the edict – despite an outpouring of public and media criticism.

In all, some 300 rabbis have now signed the document which warns that “it is forbidden in the Torah to sell a house or a field in the land of Israel to a Gentile.” The document specifically calls for those who rent or sell property to non-Jews to be ostracised by the community.

“After someone sells or rents just one flat, the value of all the neighbouring flats drops … He who sells or rents to non-Jews causes his neighbours a big loss and his sin is great,” it says. “Anyone who sells property to a non-Jew must be cut off!”

The manifesto quotes extensively from Jewish writings, including the Bible. It cites Exodus 23:33: “Do not let them live in your land or they will cause you to sin against me, because the worship of their gods will certainly be a snare to you.”

The rabbi signatories were swiftly rebuked by many public figures, including other rabbis and civil rights organisations as well as mainstream politicians, among them Prime Minister Benjamin Netanyahu.

The Speaker of the Knesset, Reuven Rivlin, described the rabbis’ call “an embarrassment to the Jewish people, another nail in the coffin of Israeli democracy.”

Others expressed concern lest racism against the Arab minority in Israel backfire against Jewish minorities around the world.

Noah Flug, head of the International Association of Holocaust Survivors, told IPS he was shocked by the content of the rabbis’ letter, saying it recalled the Nazis banning of Jews from living alongside other Germans.

“How can we not remember how the Nazis threw Jews out of their apartments in order to create ghettos, how they wrote on benches ‘No Jews allowed’, and how, of course, it was prohibited to sell or rent property to Jews. Who would have believed that people would now be calling for this to happen in our country?”

The anti-Arab mood in Bat Yam, and the attempts to contain it, are a reflection of similar situations that have arisen recently in a number of other Israeli towns, starting from the holy Jewish city Safed in Galilee: the local rabbi was the first to issue a call on Jewish residents of the town to “keep Arabs out”.

For now, official Israel has managed to keep a lid on a potentially explosive situation.

But many of the rabbis are unrepentant. “Racism originated in the Torah,” Rabbi Yosef Scheinen, who heads a religious seminary in Ashdod, a port town south of here, told Israel Radio. “The Land of Israel belongs to the people of Israel. This is what the Holy One, Blessed Be He, intended.”

Despite the widespread condemnation, experts au fait with the mood among some religious and hard nationalist circles believe there is widespread support for the views as voiced by the rabbis in their original document.

Menachem Friedman of Bar Ilan University said, “They are expressing fears of the whole population, but particularly the poorer sectors. The state itself often adopts discriminatory positions towards the Arab minority and that contributes to deep fears raised by fundamentalist Islam, creating a kind of ghetto mentality among many Jewish Israelis, even though they are the majority in this country.”