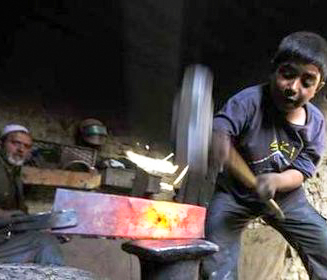 Abdul Wahab is one of about 1.2 million Afghan children who joined the labour market to help their families. (Reuters)

With sweat dripping down his face, 11-year-old Abdul Wahab swings a heavy sledgehammer down onto a red hot piece of metal to mould it into a truck part.

“My father can’t feed us alone because the food in the market is very expensive,” Abdul Wahab, whose face is marked with grim and soot from the fire, told Reuters on Saturday, December 18.

The young boy is one of about 1.2 million children who joined the labour market to help their families, according to government estimates.

“I would like to go to school, but my father’s alone here so I must help him,” said Abdul Wahab, whose shoulders appear broad for his age because of the physical blacksmith work.

“We don’t receive any assistance from the government.”

A 2010 study by the Afghanistan Independent Human Rights Commission found that an even larger portion of the country’s 15 million children — up to 40 per cent — were likely to be engaged in some sort of paid work.

Children make up half of the country’s population, and a quarter of children die before the age of five and the average Afghan life expectancy is 44 years.

Some children work for mechanics, in agriculture, weaving carpets, selling goods on the street, begging for money wiping down dusty vehicles stuck in Kabul’s chronic traffic jams, or collecting cans and bottles from the city’s putrid rubbish dump.

While Afghan children can legally work up to 35 hours a week from the age of 14, they are not allowed to do hazardous jobs like Abdul Wahab’s work in his father’s Kabul blacksmith shop.

“I don’t like my son working here. I want him to go to school, but we have to work.”

After 30 years of conflict, Afghanistan is one of the poorest countries in the world, with many Afghans still lack the very basics of life.

The country is so destitute and undeveloped that most inhabitants have no central heating, electricity or running water.

According to the international policy think tank Senlis, more than 70 per cent of Afghans are chronically malnourished, with less than a quarter having access to safe drinking water.

Advert poverty and widespread unemployment push many Afghan families to send their children into the labour market at early age.

“A majority of them start to work from age nine and we have kids below nine selling things on the street,” said Afghanistan Independent Human Rights Commissioner Nader Nadery.

“A major portion of these kids … are breadwinners for their families.”

The commission says that at least 1.5 million children are breadwinners for their families.

Nadery lamented that the West-backed Afghan government of Hamid Karzai lacks a plan and resources to deal with the child labour.

“If it’s not dealt with, if they are left without education, then we are not only prolonging the conflict and providing more recruitees for it, but also we undermine any possibility of growth and the future development of the country.”

Aggravating the problem is the years-long conflict, which left many children without their fathers, making them responsible for supporting their family.

“I do this for money,” said Bebe Gul, 10, who carries a white Hessian bag to collect scrap metal.

Gul’s father was killed during an industrial accident and she has to earn money for her mother and four siblings instead of going to school.

“I sell it because my father was killed,” added Gul, wiping her nose on her faded black headscarf.