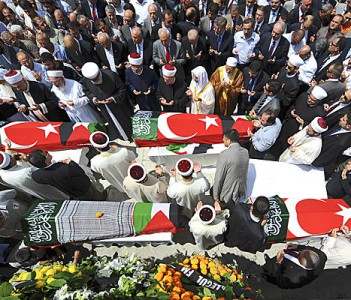 Israel is expected to offer hundreds of thousands of dollars to the families of the nine Turkish activists who were killed in a deadly raid on a humanitarian aid convoy bound for the Gaza Strip last May.

Turkey and Israel are close to an agreement over the wording of an apology Ankara has demanded as the two sides move toward rebuilding ties.

Turkish protesters marching in Istanbul against Israel’s takeover of the Gaza flotilla in May.

Turkish Prime Minister Recep Tayyip Erdogan discussed with senior advisers on Wednesday the content of a memo aimed at ending the crisis with Ankara’s once-close ally.

Most of the remaining points of contention concern the exact phrasing of Israel’s apologies related to its raid on the flotilla. Erdogan demands that Israel say it “apologizes,” while Israel prefers to use the word “regrets.”

During the consultations held in Erdogan’s office, the permanent undersecretary of the Turkish Foreign Ministry, Feridun Sinirlioglu, updated the prime minister on the talks he’d held with Israeli UN envoy Yosef Ciechanover in Geneva earlier this week.

The Turkish daily Huriyet reported that Namik Tan, the Turkish ambassador to the United States who previously served as ambassador to Israel, and his Israeli counterpart in Washington, Michael Oren, are also holding talks to bring the crisis between the two countries to an end.

It remains unclear whether Erdogan has given a green light for the talks to continue, but sources spoke of more meetings to be held in the coming days to try and flesh out an appropriate resolution over the issue of Israel’s apology.

Israel is refusing to use the word “apology,” as it continues to insist that the actions the navy took on the flotilla were legitimate. Israel has, however, agreed to express sorrow and regret over the killing of the Turkish activists on board.

According to the report in Huriyet, Israel wants the expression of sorrow and regret to be “humanitarian” and addressed toward the victims, rather than an official apology to the Turkish government. Erdogan, for his part, is demanding that Israel apologize “to the Turkish republic.”

The financial compensations, by contrast, do not appear to be much of an issue of contention between the two sides, with Israel expected to pay several hundreds of thousands of dollars to the families of the activists killed and smaller amounts to those who were injured. The compensation is also meant to be a “humanitarian” gesture, rather than an Israeli admission of legal responsibility for the incident.

Prime Minister Benjamin Netanyahu and his advisers continued Wednesday to avoid making any comments on Foreign Minister Avigdor Lieberman’s opposition to the deal with Turkey. Lieberman was joined yesterday by Vice Prime Minister Silvan Shalom, who said Israel should not apologize for what took place during the takeover of the Mavi Marmara ship.