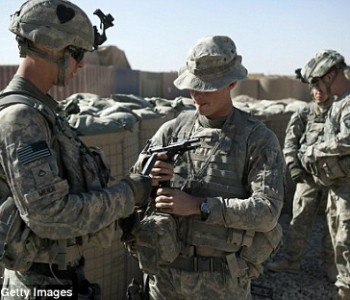 A US Army staff sergeant has been jailed for attacks on Afghan civilians as part of a deal which requires him to give evidence against other soldiers.

Robert Stevens was sentenced to nine months in prison and demoted after he admitted “shooting in the direction” of two Afghans, and lying to officials.

Prosecutors at his court martial dropped a count of conspiracy to commit aggravated assault on three Afghan men.

Sgt Stevens is one of 12 soldiers charged over the attacks on civilians.

Five of the accused are charged with killing three Afghan civilians in Kandahar province this year, but Sgt Stevens is not among them.

Army prosecutors have said the other accused men conspired to kill unarmed Afghans for sport and to cover up the killings by fabricating a story about coming under attack.

Some of the soldiers are also accused of keeping body parts of dead Afghans, taking photos of corpses and of using drugs.

The BBC’s Rajesh Mirchandani in Los Angeles says the most serious charge the medic faced was that he fired at unarmed Afghan men.

Sgt Stevens falsely claimed that a group of Afghan civilians posed a threat by saying he had seen one of them with a rocket-propelled grenade.

In court he testified that he had fired under an order from the alleged ringleader of the group, Staff Sgt Calvin Gibbs.

He could have been sentenced to a total of 19 years for his crimes. Apart from the nine months’ detention, he will be demoted to the rank of private and must forfeit all pay and allowances while serving his sentence.

He has also agreed to testify against his fellow accused in their upcoming courts-martial.

Based at Fort Lewis in Washington State, they were attached to the Army’s 5th Stryker Brigade, which deployed to Afghanistan last year and saw heavy fighting around Kandahar.

The alleged killing of Afghan civilians took place in March this year while the unit was deployed to Forward Operating Base Ramrod.

Staff Sgt Gibbs is accused of taking finger bones, leg bones and a tooth from Afghan corpses as trophies and of showing fingers to another soldier and threatening to kill him if he reported drug use to commanding officers.

Staff Sgt Gibbs’s lawyer has said his client maintains the shootings were appropriate engagements with the enemy and denies any conspiracy to murder Afghans.

Correspondents say the legal proceedings in the matter are likely to be complex, in part because of the difficulty of gathering evidence and witness testimony from the Afghan war zone.