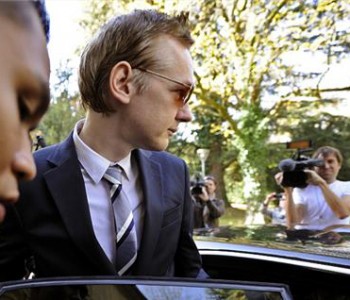 Police say WikiLeaks founder Julian Assange has surrendered to British police as part of a Swedish sex-crimes investigation, the latest blow to the secret-spilling website that faces legal, financial and security challenges.

London’s Metropolitan Police said Assange was arrested at about 09:30 GMT on Tuesday by appointment at a London police station under a European Arrest Warrant.

“He is accused by the Swedish authorities of one count of unlawful coercion, two counts of sexual molestation and one count of rape, all alleged to have been committed in August 2010,” police said in a statement.

He was due to appear before City of Westminster Magistrates Court in London later on Tuesday.

Mark Stephens, Assange’s lawyer, said that Sweden, where the allegations of sex crimes are originating, appeared to be manipulated by the US, which has been angered by WikiLeaks latest release of classified documents.

“The question is, are the Swedes being manipulated by a third party actor or is there any improper interference,” he told Al Jazeera.

He said the Swedish prosecutor had not told Assange what the nature of the allegations are or what the evidence is against him.

“I have to say, the way you have a prosecutor from Sweden, the most civilised country ordinarily, who isn’t complying with her obligations under the United Nation’s requirements for prosecutors, who’s not complying with Swedish law … then you have to start asking yourself … whether there is some other motivation going on here which is the unseen hand.”

However, Marianne Ny, the Swedish director of prosecution, told Swedish media last week that Assange’s lawyers had been given all the information that it is appropriate to share at the current stage of the investigation.

The 39-year-old Australian is accused of rape and sexual molestation in Sweden, and the case could lead to his extradition. He has denied the accusations, which Stephens has said stem from a “dispute over consensual but unprotected sex.”

According to media reports, Assange slept with two women during a visit to Sweden in August. One of them has been quoted by a Swedish newspaper as saying that the sex was consensual for a start, but ended with abuse.

In an interview with Aftonbladet, one of the women dismissed claims that the allegations had been orchestrated by the Pentagon.

“The responsibility for what happened to me and the other girl lies with a man with a twisted attitude to women and problem to take a no for an answer,” she told the paper.

Jennifer Robinson, Assange’s London-based lawyer, said her client would likely resist being returned to Sweden for fear he could be turned over to the US where outrage is growing over the leak of documents.

“[The Swedish prosecutor] said publicly on television last night that all she wants is his side of the story. Now we’ve offered that on numerous occasions. There is no need for him to return to Sweden to do that,” she said.

“I think he will get a fair hearing here in Britain but I think our, his, prospects if he were ever to be returned to the US, which is a real threat, of a fair trial, is, in my view, nigh on impossible,” she told the Australian broadcaster ABC.

On Tuesday, Julia Gillard, Australia’s prime minister, said that posting the US diplomatic correspondence on the web was “grossly irresponsible” and that the publication would not have been possible “if there had not been an illegal act undertaken” in the United States.

Gillard had previously said that publishing the documents was an illegal act, without saying why.

She said police were still investigating whether Assange had broken any Australian laws.

WikiLeaks has been under intense international scrutiny over its disclosure of a mountain of classified US cables that have embarrassed Washington and other governments. US officials have been putting pressure on WikiLeaks and those who help it, and are investigating whether Assange can be prosecuted under espionage law.

The pressure on WikiLeaks increased as the Swiss authorities closed Assange’s bank account, depriving him of a key fundraising tool. WikiLeaks struggled to stay online despite more hacker attacks and resistance from world governments, receiving help from computer-savvy advocates who have set up hundreds of “mirrors”, or carbon-copy websites around the world.

In what Assange described as a last-ditch deterrent, WikiLeaks has warned that it has distributed a heavily encrypted version of some of its most important documents and that the information could be instantly made public if the staff were arrested.