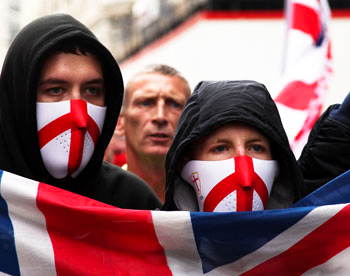 The far-right English Defence League is dividing communities and acting as a recruiting tool for Islamic extremist groups, counter-terrorism officers have warned.

The organisation, which has attracted football hooligans and far-right extremists, has targeted high-profile Muslim communities across the country since it was formed 18 months ago. Thousands of people have attended its protests, many of which have descended into violence and racist and Islamophobic chanting.

Detective Superintendent John Larkin, from West Midlands counter-terrorism unit, told BBC Radio 5 Live: “In some areas, we have evidence that once they have gone and the high-profile policing of the event has occurred, there’s fertile ground for those groups who would come in to encourage people to have this reality – this is the way white western society sees us.

“And that’s a potential recruiting carrot for people and that’s what some of these radicalisers look for – they look for the vulnerability, for the hook to pull people through and when the EDL have been and done what they’ve done, they perversely leave that behind.”

The EDL, which is planning to hold its latest rally in Preston later this month, dismissed the claims saying “the root cause of the problem is the Qur’an”.

Last week, EDL members were involved in a standoff with members of a small extremist Islamic group called Muslims Against Crusades in west London on Remembrance Day.

Nick Lowles, from the anti-racist group Searchlight, said the showdown underlined the fact that the two groups feed off each other.

“Such is the symbiotic relationship between the two that they actually need each other to justify their own existence,” said Lowles. “For the [Muslims Against Crusades] the presence and activities of the EDL prove how white British society is the enemy. For the EDL the Islamist extremists are proof of the violent nature of Islam. They are two sides of the same coin of hate.”

The policing minister, Nick Herbert, told the BBC that violence and intimidation were “highly unacceptable, wherever it comes from”. “You can’t tackle extremism by being extremist yourself,” said Herbert. “You don’t prevent hatred by being hateful yourself.”

The EDL started in Luton last year and has become the most significant far-right street movement in the UK since the National Front in the 1970s. It claims to be a peaceful, non-racist organisation opposed only to “militant Islam”. But many of its demonstrations have ended in confrontations with the police after some supporters became involved in violence, as well as racist and Islamophobic chanting.

In May, the Guardian revealed that the EDL planned to step up its Islamophobic street campaign targeting Bradford and Tower Hamlets in London.

Today, Lancashire police said it was working hard to ensure the EDL demonstration in Preston passes off peacefully.