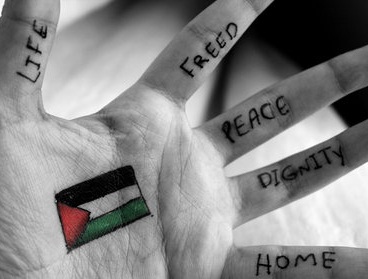 Thousands of faithful assiduously listened as I outlined the challenges facing Palestine and its people. Cries of “Allahu Akbar” (God is Great) occasionally resounded from a corner of the giant South African mosque. Many whimpered as I described the tragedy that had befallen Gaza as a result of the Israeli siege. They cheered, smiled and nodded, as I emphasized how the will of the Palestinian people would not be defeated. A few older people at the front simply wept throughout my talk, which preceded a Friday sermon in Durban a few months ago.

If passion and kindness were powerful in and of themselves, then the compassion that poured from those Muslim faithful could surely better the world in myriad ways. The sheer love and concern displayed by men and women of different races, age groups, class affiliation and languages was most uplifting and validating.

As a collective, Palestine and its struggle for freedom and justice is closer to the hearts and minds of Muslims all over the world than any other group I have reached out to. To garner support among Muslims, one is never obligated to make a case, to justify, or to respond to accusations heralded from left and right. Needless to say, Muslim affinity to Palestine is historic, based on Islamic principles articulated in the Holy Qur’an and the Sunnah — the legacy of Prophet Muhammad (peace be upon him).

But over time, something went astray. While the sentiment remained strong, there was little unity in the way in which the energy was harnessed, or the consensus galvanized. In their attempts to reach out to Muslims, many manipulated the genuine feelings of ordinary Muslims for personal, political, ideological and even financial reasons. Various Muslim leaders, organizations, and individuals presented a limited understanding of the situation in Palestine, and offered an exclusivist road map as to how the agonizing conflict could be resolved.

The result was most disappointing. There was no clear strategy, no attempt at relevance, and no tangible difference to be yielded from the support of hundreds of millions of Muslims worldwide.

In a way, such failure is symptomatic of a much greater ailment that has long befallen Muslims. After the demise of the Ottoman Empire, the concept of Muslim Ummah (nation) – demarcated by real spatial and political lines – was replaced by references to a nation that existed within indefinable intellectual boundaries. This concept was shrewdly patronized by various Arab and Muslim leaders throughout history, who insisted that they — and they alone — represented the political centrality of that impalpable Muslim body. Therefore, owing to the centrality of the Palestinian cause to Islam, these leaders also adopted the Palestinian cause as there own, even if that relationship remained confined to fiery speeches and heart-rendering Friday sermons.

In other words, Palestine, for many Muslims existed as part of a collective imagination, solidified with unifying symbols such as Al-Aqsa Mosque, and references to specific verses in the Holy Qur’an. Such tactics worked wonders, as helpless but fervent Muslims donated generously, or chanted the name of whomever posed as the savior of the “Islamic land of Palestine” and its holy mosque.

Ultimately that rapport yielded three distinct groups. The first group is largely content with the mere designation of Palestine as a “Muslim cause,” which they can serve through the occasional donation and regular supplication for Muslim victory in Palestine. Another group comprises those who have grown cynical of the mainstream Muslim interpretation of Palestine, and who have become increasingly radicalized and isolated. The third group is completely disenchanted, and thus removed.

Predictably, none of these groups was affectively involved in contributing to a long-term strategy of bringing the Israeli occupation to an end, or to empowering the Palestinian people in their resistance to achieve such an outcome.

Meanwhile, the Second Palestinian Intifada (uprising) of 2000 defined and successfully galvanized a growing international movement around Palestine. In this movement, Muslims, as a group, were no longer a primary contributor. There were a few resulting gains, such as depriving Israel and its allies from reducing the conflict to that of religious war, with Israel naturally serving the role of the bulwark of Judeo-Christian values. But there was also much to lose, as millions of ardently passionate supporters of the Palestinian cause reverted to their role of mass protest, flag burning and angry chanting. That image too, was cleverly manipulated, especially after Sept. 11, to link Palestine to Muslim extremism. Many were driven to believe that every bearded Muslim was somehow linked to Al-Qaeda.

The rise of Hamas as a political power in the Palestinian elections of 2006 once again reaffirmed the Muslim relevance to Palestine. Hamas’ attempt at exploring its “strategic depth” by reaching out to Muslim countries did not translate into the desired political gains, but it did enliven the more or less dormant Muslim link to Palestine and to the conflict as a whole. More, thanks to Hamas’ ability to impress itself as a long-term actor in the conflict, some Muslims outside Palestine began exchanging sentimentalities with real political language. Meanwhile, many Muslim communities tried to find practical platforms to express their solidarity and to aid the Palestinian people, with Gaza representing the primary rally cry.

Unfortunately, some resorted to the same exclusivist language of the past, itself rich in religious positivism. This may not always be intentional, but it is likely to weaken international solidarity, or, at best, relegate Muslim relevance to a group of people whose link to Palestine is merely religious.

At this advanced stage of the solidarity, which shows Palestine once again at the top of international agenda — including in civil societies around the world — Muslims must redefine their link to Palestine, based on the values and principles reflected in Islam. But they must also present it in universally shared ideal, speaking a unified and unifying language. While they must proudly embrace their symbols, they should also understand that the fight is one for freedoms and rights, and not specific corporeal locations.

Muslims must stand, hand in hand, with people from all different backgrounds, not as exclusive owners of the Palestinian struggle, but as proud contributors to a global movement that wishes to ensure that justice is served, rights are attained and peace for all is realized.