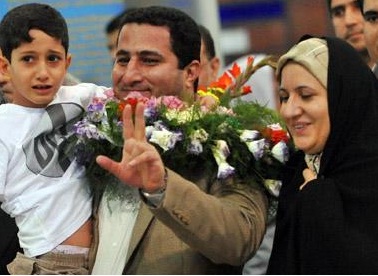 Confronted with the accusation that Iranian nuclear scientist Shahram Amiri had been kidnapped by US and Saudi intelligence agencies while on a trip to Mecca, and brought to the US for interrogation, State Department spokesman P.J. Crowley averred: “We are not in the habit of going around kidnapping people.”

To which the only proper response is: Oh, really?

Given the numerous instances of “extraordinary rendition” in which our government has been engaged, and no doubt continues to be engaged, one wonders how Senor Crowley can say that with a straight face. But then again, being an official spokesman for the US Department of State no doubt requires some sort of facial surgery – or, perhaps, an industrial-strength shot of Botox – to achieve the desired results.

Now that Shahram has shown up at the Iranian interests section of the Pakistani Embassy in Washington, D.C., claiming to have been abducted by the US and Saudi intelligence services, and tortured, Crowley may want to review his knowledge of US habits.

In March, ABC News released an “exclusive” report hailing Shahram’s “defection” as a great US “intelligence coup,” the missing link in the puzzle piecing together a picture of Iran’s alleged nuclear weapons program. Shahram is said to have worked for the Iranian Revolutionary Guards, and news of his “defection” appeared alongside reports of an Iranian “secret” nuclear facility on the outskirts of the city of Qom.

As it was, the Iranians themselves revealed the existence of the Qom facility and opened it up to inspection by the IAEA, but the matter of Shahram’s disappearance appeared to throw a shadow over their efforts at openness — which was, of course, the whole point.

Our spooks had a narrative ready made. We were to be told that the defector had brought with him a laptop which contained all the secrets of Iran’s nukes, and this was to be touted as yet more evidence – as if this administration needed any – Iran was harboring nuclear ambitions in defiance of the “international community.” “According to the people briefed on the intelligence operation,” ABC “reported,” “Amiri’s disappearance was part of a long-planned CIA operation to get him to defect. The CIA reportedly approached the scientist in Iran through an intermediary who made an offer of resettlement on behalf of the United States.”

That, at least, was the official story, dutifully relayed to the world by ABC “News”: Shahram, however, upended their neat little narrative, months later, with a YouTube video – that indispensable weapon of counter-propaganda – in which he told us:

“I was kidnapped last year (2009) in the holy city of Medina on 3 June in a joint operation by the terror and abduction units of the American CIA and Saudi Arabia’s Istikhbarat [intelligence agency].They took me to a house located somewhere that I didn’t know. They gave me an anesthetic injection. When I became conscious I was in a big [voice interrupted] towards America.

“During the eight months that I was kept in America, I was subject to the most severe tortures and psychological pressures by the American intelligence investigation groups.

“And the main aim behind these investigation teams and the pressure imposed on me was to make me take part in an interview conducted by an American media source and claim that I was an important figure in Iran’s nuclear program and I had sought asylum in America at my own will. And (to say) while seeking asylum I took some very important documents and a laptop with classified information on Iran’s military nuclear program in it to America from my country.”

This was followed, hours later, by yet another video, in which someone claiming to be Shahram – and looking, admittedly, just like him – said he wanted to clear up “rumors,” denied having any political views or that he had betrayed his country, and stated: “I am in America and intend to continue my education here. I am free here and I assure everyone that I am safe.”

Gee, it’s a good thing the CIA has their own YouTube channel: now there’s a solid investment of the US taxpayers’ money. But Shahram wasn’t done with them quite yet.

On June 29, a third video cropped up, which was played by Iranian television, in which the real Shahram cleared up the mystery:

“I, Shahram Amiri, am a national of the Islamic Republic of Iran and a few minutes ago I succeeded in escaping US security agents in Virginia. Presently, I am producing this video in a safe place. I could be re-arrested at any time.”

After appealing to Western human rights organizations to intervene on his behalf – fat chance! – he continued:

“The second video which was published on YouTube by the US government, where I have said that I am free and want to continue my education here, is not true and is a complete fabrication. If something happens and I do not return home alive, the US government will be responsible.”

All this time Washington had refused to acknowledge Shahram’s presence in the US, but when he showed up at the Pakistani embassy an official who refused to be named told the media: “He came to this country freely, he lived here freely, and he has chosen freely to return to Iran.”

Such evidence as we have indicates only the last of those three assertions bears any resemblance to the facts. Aside from Shahram’s testimony, and his presence at the embassy, the high quality of the second video, and the relatively poor quality of the first and third, is suggestive of an effort by US intelligence to cover up a badly botched job.

What’s interesting about this story isn’t only the scandal of a kidnapping carried out by our spooks – after all, we should be inured to that by now – but the role the US media was slated to play if Shahram had gone along for the ride. I wonder which “American media source” was tasked with interviewing him. Could it be ABC “News,” the outlet given the “exclusive” story of his alleged “defection” just before the Qom story broke? Just guessing there, but amid all the controversy over media folk partying with administration movers-and-shakers, this kind of beach party ought to make us stop and think about the degree to which the media is functioning as an arm of government.

Not that this is anything all that new. Back in the day, you’ll recall, it was a Washington Post reporter, Dillard Stokes, who, in league with the FBI and the Roosevelt administration, wrote a letter under an assumed name to the defendants in the Great Sedition Trial of 1940, seeking antiwar literature which he proposed to distribute to US soldiers: this was later used as evidence by the prosecution. During the cold war era, the media was utilized by the FBI” s “red squad” to plant stories and spread disinformation, and there’s no reason to believe this symbiosis has ended with the coming of the Obama-ites to Washington: quite the opposite, I’m sure. We are also all too familiar with “cooked” intelligence, the smell of it having permeated Washington (and the front page of the New York Times – thanks, Judy!) in the run-up to the invasion of Iraq.

The signal achievement of the Obama administration may have been to combine these elements of deception, and add to them the crime of kidnapping.

Let no one berate us libertarians for describing the US government as a criminal enterprise: it isn’t disloyalty to the country, or even a penchant for overstatement, that drives us to such rhetorical excesses. It’s the story of what happened to Shahram Amiri: it’s the lies, the thuggery and hubris of a ruling elite that believes it can get away with anything. Such is their contempt for the American people – and the peoples of the world – that they think we’ll swallow any tall tale, no matter how crudely fabricated, because we’re just not as smart as their cunning selves.

However, it looks like they’re not cunning enough by half, having blown the Shahram operation and exposed their embarrassingly inept tradecraft. They can try to patch up this gaping hole in US credibility by claiming Shahram left only to protect his family from retaliation, but there are certain problems with this.

Since the family wasn’t harmed in the year Shahram spent in captivity in the US, one can reasonably infer they were never in any danger. Indeed, if they were in danger, and the US let him return home because of it, then wouldn’t revealing this alleged “threat” plant suspicion in the minds of Iranian officials that perhaps he had turned over valuable intelligence to the Americans – and place Shahram and his family in mortal danger?

In any case, I did warn you far in advance that we’d soon be treated to a veritable cornucopia of “news” stories detailing the nefarious plans of Iranian ayatollahs to nuke Israel, and Brooklyn, too. The Obama-ites are under increasing pressure from the Israel lobby to abandon the CIA’s assessment that Iran ended a nascent nuclear weapons program in 2003: Shahram’s “defection” was supposed to have facilitated this development. Instead, the whole scheme backfired, and, rather than making the case for war with Iran, the Shahram affair has confirmed what some of us knew already: that the US government is a criminal enterprise with no morals, no credibility.