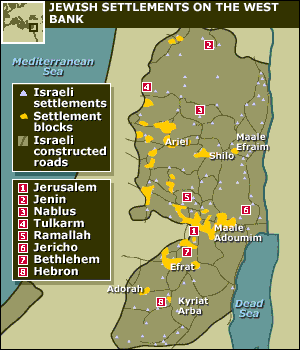 Jewish settlers, who claim a divine right to the whole of Israel, now control more than 42 per cent of the occupied West Bank, representing a powerful obstacle to the creation of a Palestinian state, a new report has revealed.

The jurisdiction of some 200 settlements, illegal under international law, cover much more of the occupied Palestinian territory than previously thought. And a large section of the land has been seized from private Palestinian landowners in defiance even of an Israeli supreme court ruling, the report said, a finding which sits uncomfortably with Israeli claims that it builds only on state land.

Drawing on official Israeli military maps and population statistics, the leading Israeli human rights group, B’Tselem, compiled the new findings, which were released just as the Israeli prime minister, Benjamin Netanyahu, arrived in Washington to try to heal a gaping rift with US President Barack Obama over the issue of settlements.

“The settlement enterprise has been characterised, since its inception, by an instrumental, cynical, and even criminal approach to international law, local legislation, Israeli military orders, and Israeli law, which has enabled the continuous pilfering of land from Palestinians in the West Bank,” the report concluded.

Mr Obama’s demand for a freeze on illegal building has caused months of friction between his administration and the Israeli government. But the US president, facing mid-term elections in November, appeared eager to end the dispute with Israel yesterday.

He said the country was making “real progress” on improving conditions in the Gaza Strip and was serious about achieving peace.

The two men made a joint public appearance, carefully choreographed to convey mutual ease and friendship.

When Mr Netanyahu last visited the White House, in March, US anger at his refusal to end construction meant the Israeli premier was denied a joint appearance with Mr Obama before the cameras. This time the photo-op was granted and the two men afterwards shared a meal – although not a state dinner but a working lunch.

“Reports about the demise of the special US-Israel relationship aren’t premature, there are just flat wrong,” Mr Netanyahu said, in response to a reporter’s question about the perceived tensions. Playing to the same script, Mr Obama said that the “bond between the United States and Israel is unbreakable”.

But the revelations in the B’Tselem report suggest that despite Mr Netanyahu’s stated desire for peace, his policy on settlements remains a dangerous obstacle to the establishment of an independent Palestinian state and therefore to a durable peace.

They cast an uncompromising spotlight on Israeli practices in the Palestinian territories that have long drawn international criticism for establishing “facts on the ground” hampering the creation of a viable Palestinian state.

And despite the outlawing by Israel of settlement expansion on private Palestinian land, settlers have seized 21 per cent of land that Israel recognises is privately-owned.

B’Tselem alleged that Israel had devised an extensive system of loopholes to requisition Palestinian land.

At the same time, Israel has built bypass roads, erected new checkpoints, and taken control of scarce water resources to the benefit of the settlers. The measures have effectively created Palestinian enclaves within the West Bank, the report said.

Under international law, any Jewish settlements built on occupied territory are illegal. These include all the settlements in the West Bank, and thousands of Jewish homes in East Jerusalem, the Arab-dominated sector of the city annexed by Israel after the 1967 Six Day War. The international community still regards East Jerusalem as occupied territory. Despite firm commitments from successive Israeli governments to dismantle illegal outposts built after 2001 and to cease expansion of the settlements, Israel has provided millions of dollars worth of incentives to encourage poorer families to move into the West Bank. Some 300,000 settlers live in the West Bank.

Settlers immediately attacked the report, claiming it was timed as a spoiler to the Washington meeting.

In Washington, no concrete breakthroughs were announced but Mr Obama said that he believed the Israeli leader was ready to move towards direct talks with the Palestinians. Indirect talks began earlier this year, mediated by special US envoy George Mitchell.

Mr Netanyahu showed signs of responding to the pressure. “Peace is the best option for all of us and I think we have a unique opportunity to do it,” he said. “If we work together with [Palestinian] President [Mahmoud] Abbas then we can bring a great message of hope to our peoples, to the region and to the world.”

The Palestinians continue to refuse direct talks with Israel while new settlement construction is allowed. Settlement activity continues in East Jerusalem, which Palestinians aim to include in a new state.

With US-Israel ties already frayed, Mr Netanyahu postponed a visit to the White House last month in the aftermath of Israel’s deadly raid on a Turkish-led flotilla trying to deliver humanitarian goods to Gaza.

For Mr Obama, the danger is clear that any long-lasting record of animosity towards Israel could translate into lost votes at the mid-term elections. 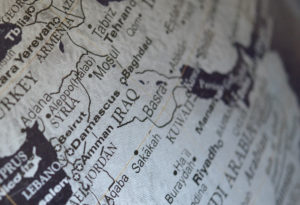