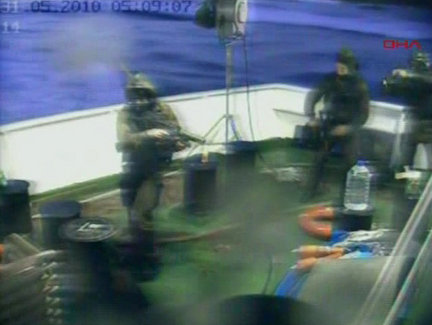 Israel says it will immediately deport hundreds of foreign activists who were seized after commandos boarded an aid flotilla which was trying to break the blockade of the Gaza Strip.

A spokesman for Israeli prime minister Benjamin Netanyahu said all 680 activists held would be freed, including two dozen Israel had earlier threatened to prosecute for allegedly assaulting its troops.

Five Australians are among those held, and one of them, 20-year-old Ahmad Luqman, was shot in the leg and has had surgery at a hospital in Tel Aviv.

The other four are among hundreds being held in a detention centre at Beersheva in Israel’s south.

Mr Luqman’s wife, Jerry Campbell, who was also on the ship, says he was not armed in any way when he was shot.

She says neither her husband nor any passengers on board had any weapons when Israeli forces began shooting.

She says she has been denied permission even to phone her husband and has not been told which hospital he is in.

Arab-Israeli parliamentarian Hanin Zoabi was also on the Turkish ship Mavi Marmara when it was boarded by the Israeli commandos.

Ms Zoabi has diplomatic immunity from prosecution and was one of the first passengers freed.

She said she watched what was happening from below deck and saw no provocation from those on board.

She says that as far as she knows, none of the passengers were armed.

“Most of the passengers, 90 per cent were inside their rooms and were terrified,” Ms Zoabi said.

Earlier, NATO joined growing international demands for the activists to be released, while the United Nations issued a statement condemning Israel’s actions and demanding a full inquiry.

But Israel is standing by its armed forces, saying they had no choice but to defend their lives against violent attacks from those on board.

Overnight the Israeli military admitted it had made mistakes during the raid, saying some of the commandos had been issued with paintball guns for crowd control duties.

The Israeli military puts the blame for the deaths on the organisers of the aid flotilla, saying its soldiers were attacked by a lynch mob, some of whom were armed with clubs and knives.

But reports from on board the ship say the Israeli soldiers began firing first and that activists were waving white flags, and many passengers have claimed that no-one on board was armed.

One soldier who was injured spoke to Israeli media.

“There were dozens of people, 95 per cent of them armed with knives and clubs,” he said. “They simply fell on our forces, using all of those things to attack us.”

Israel’s action – whether or not it was justified – has drawn growing condemnation around the world.

Many of those killed in the raid were from Turkey, where there were furious protests on the streets.

Some of the strongest words were from Turkey’s prime minister, Recep Tayyip Erdogan, who said Israel deserved the harshest punishment.

“This bloody massacre by Israel on ships that were taking humanitarian aid to Gaza deserves every kind of curse,” he said.

“This attack was obviously an attack on the international law, the conscience of humanity and world peace.”

But Israeli prime minister Benjamin Netanyahu has defended his forces to the hilt.

“Our soldiers had to defend themselves, defend their lives or they would have been killed,” he said.

“And regrettably in this exchange at least 10 people died. We regret this loss of life.”

Despite the growing international fury – and the many dead and wounded – Israel remains defiant.

A seventh ship has reportedly set sail for Gaza from Italy but Israel says its policies are unchanged and it will not allow ships to pass through its blockade.

US secretary of state Hillary Clinton says Washington backs an Israeli probe into the raid, but says it must be prompt, impartial and transparent.

“I think the situation from our perspective is very difficult and requires careful, thoughtful responses from all concerned,” Ms Clinton said.