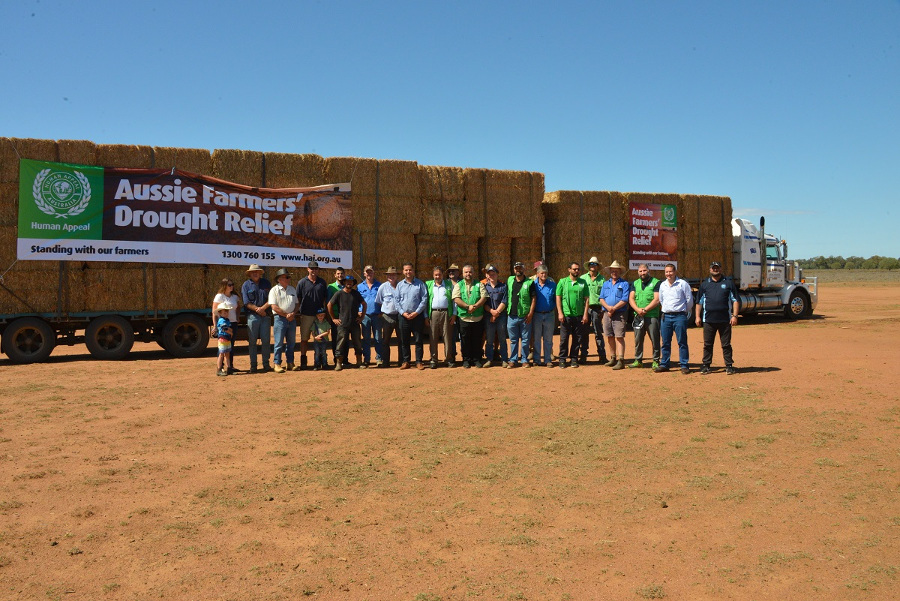 Human Appeal with the help of our generous community has been able to raise and allocate an amazing amount of $90,000 to help alleviate the hardships faced by farmers.

On Tuesday 27th November the Human Appeal team including the Chairman: Mr Riyad Qasim and the City of Canterbury Bankstown Councillor Bilal El-Hayek, headed out to Cobar NSW and Warren Shire to supervise the aid distribution.

With the help of Cobar Council (a sister Council to Canterbury Bankstown Council) the aid was distributed among farmers in Cobar. The following day, in conjunction with Fletcher International (Human Appeal’s Qurban project partner for the last 27 years), bales of hay were distributed in Warren Shire.

Mr Riyad Qasim handed out hay vouchers to farmers affected the most in Cobar and Warren. The vouchers enabled them to collect their bales of hay instantly. The farmers expressed their gratitude and appreciation to the generous donors who contributed to this great cause. Mr Rusty Mitchel, a farmer of Cobar NSW, thanked Human Appeal’s donors for standing with farmers not only financially but also for emotional support during the prolonged drought and rural hardship.

He appreciated the fact that hundreds of kilometres away someone cared and stood beside him during these tough times.

Many thanks to our generous community for showing solidarity with our Aussie farmers by supporting the cause and helping many farmers who were at the brink of losing their farms due to the severe drought.

We highly appreciate our community’s contribution. With their generosity, they are not just helping farmers. In fact, they are helping their own families and the whole Australian community.