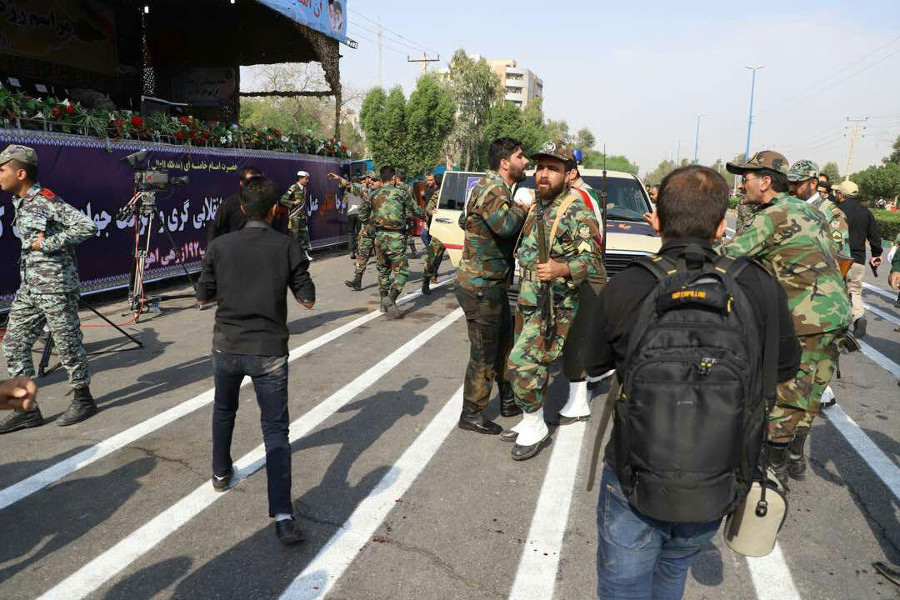 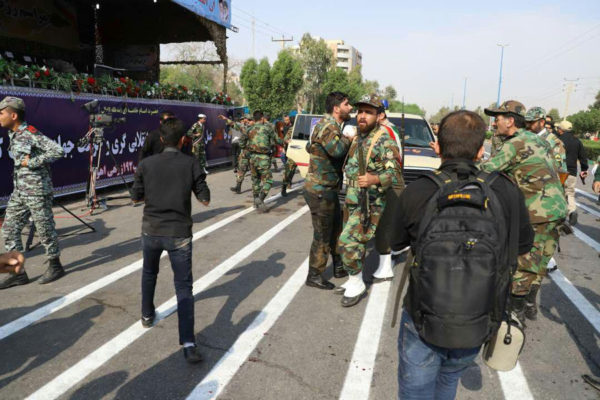 Iran’s President Hassan Rouhani has vowed a “crushing response” after four gunmen attacked a military parade in the city of Ahwaz, killing at least 25 people, including soldiers and civilians.

The gunmen opened fire on a large crowd of spectators watching the parade in the southwestern city and then attempted to attack the viewing stand for official dignitaries before being shot and wounded by security forces, the semi-official Fars news agency said.

The official state news agency IRNA said 53 people had also been wounded in Saturday’s attack and that many were in a critical condition.

Iran was holding similar parades in several cities including the capital Tehran and the port of Bandar Abbas on the Gulf.

“There are a number of non-military victims, including women and children who had come to watch the parade,” IRNA quoted an unnamed official source as saying.

“The response of the Islamic Republic of Iran to the smallest threat will be crushing,” Rouhani said in a statement on his official website.

“Those who give intelligence and propaganda support to these terrorists must answer for it.”

A video distributed to Iranian media showed soldiers at the parade, an annual event marking the start of the country’s 1980-88 war with Iraq, crawling on the ground as gunfire blazed in their direction.

“Three of the terrorists were killed on the spot and a fourth one who was injured died in hospital,” Brigadier General Abolfazl Shekarchi, a senior spokesman for Iran’s armed forces, told state television.

The attackers fired at the ceremony from a park near the parade and were wearing military uniforms, reports say.

Shekarchi said: “The four terrorists had hidden their weapons in a place close to the military parade, a few days before the parade.

“They approached the ceremony and were standing in the park which was behind the [ceremony area].”

Ayatollah Mohsen Heydari, an Ahwaz representative in the clerical body the Assembly of Experts, was at the scene when the attack took place.

Heydari said: “A few minutes after the beginning of the armed forces parade in Ahwaz, a few people in military outfit started firing at the place [where the officials stand].

“The shooting lasted a few minutes. The aim of the attackers was the official’s area, but they didn’t succeed in shooting them. When I heard the shootings, I recited the ‘Shahada’.”

At least eight members of Iran’s Revolutionary Guard are among those killed, reports say. ISNA quoted Khuzestan province’s deputy governor Ali-Hossein Hosseinzadeh as saying: “One of the martyrs is a journalist.”

Fars said the attack started at 9am local time (05:30 GMT), with witnesses saying it lasted about 10 minutes.

“Shooting began by several gunmen from behind the stand during the parade. There are several killed and injured,” a correspondent told state television.

The semi-official news agency Mehr said further shooting broke out as some of the attackers who managed to escape were being chased.

Both the ISIS and an anti-government Arab group have claimed responsibility for the attack.

A spokesperson for the Ahwaz National Resistance told Reuters news agency it had undertaken the assault.

Yaghub Hur Totsari, a spokesman for one of the two groups that identify themselves as the Arab Struggle Movement for the Liberation of Ahwaz, said the Ahwaz National Resistance, an umbrella organization of armed movements, was behind the attack but did not specify which group.

Totsari identified one of the assailants by the initials AM, without elaborating.

General Ramezan Sharif, a spokesman for the Islamic Revolutionary Guard Corp, said an Ahwazi group was “likely” behind the attack.

Later on Saturday, IS claimed responsibility for the attack, according to the group’s Amaq news agency. The group provided no evidence for the claim, Reuters reported.

Amaq reportedly wrongly stated that Rouhani was present during the parade, when in fact he was attending a military parade in the capital Tehran at the same time.

“Terrorists recruited, trained, armed & paid by a foreign regime have attacked Ahwaz,” Zarif said in a tweet, adding: “Iran holds regional terror sponsors and their US masters accountable for such attacks.

“Iran will respond swiftly and decisively in defence of Iranian lives,” Zarif vowed, adding “children and journos” were “among casualties”.

Shekarchi said the gunmen were trained by two Gulf Arab states and had ties to the US and Israel.

“These terrorists … were trained and organised by two … Gulf countries,” he told the official news agency IRNA.

“They are not from Daesh [ISIS or other groups fighting [Iran’s] Islamic system … but they are linked to America and [Israel’s intelligence agency] Mossad.”

Abbas Papi-zade, Ahwaz’s representative in Iran’s parliament, also pointed the finger at Saudi Arabia and the US.

“Currently, the situation in Ahwaz is normal. Based on the initial data, countries such as Saudi Arabia and America supported this terrorist attack. We are currently studying this event,” he said.

Iran summoned the envoys of the Netherlands, Denmark and Great Britain on Saturday night over the shooting, accusing them of harbouring Iranian opposition groups in their countries, IRNA reported.

“It is not acceptable that these groups are not listed as terrorist organizations by the European Union as long as they have not carried out a terrorist attack in Europe,” foreign ministry spokesman Bahram Qasemi was quoted as saying by IRNA.

Fereidoun Majlesi, a former diplomat and foreign policy expert, told MEE: “I think the proxy war between Saudi Arabia and Iran is entering a dangerous phase.

“The terrorist attack in Ahwaz is probably supported by Saudi Arabia as the officials in Riyadh have already stated that they would take the war inside the Iran soil.

“The Saudis’ plan is wrong. They just united Iran. This is the characteristic of Iranians. When people in Iran face a hardship or an attack, they become united to defeat the invaders.

“I strongly believe that such terrorist actions will only increase the nationalism sentiment.”

Speaking to MEE, Rasool Hosseini, a reformist foreign policy analyst, said: “I think today’s attack is in line with the US and its regional allies’ strategy to pressure Iran.

“I should add that the US secretary of state stated yesterday that they would respond to Iran-backed militias’ offensive against US interests.

“The attack occurred one day before Rouhani’s trip to New York [to attend the United Nations General Assembly].

“I think Rouhani should now use this opportunity to convey this message to the world that Iran is one of the biggest victims of terrorism, while the US labels Tehran as the state sponsor of terrorism.”

“Enemies should not imagine that they can gain dignity with this sinister move. The Iranian people and the armed forces will respond to this,” he was quoted by IRNA as saying.

Ahwaz is in the centre of Khuzestan province, where there have been sporadic protests by the Arab minority in mainly Shia Iran.

Tensions between traditional rivals Iran and Saudi Arabia have surged in recent years, with the two countries supporting opposite sides in wars in Syria and Yemen and rival political parties in Iraq and Lebanon.

Attacks on the military are rare in Iran.

Last year, in the first deadly attack claimed by ISIS in Tehran, 18 people were killed at the parliament and mausoleum of Ayatollah Ruhollah Khomeini, the founder and first leader of the Islamic Republic.