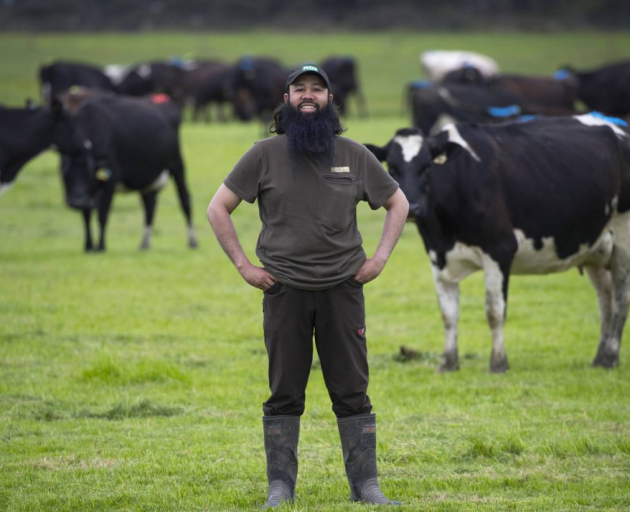 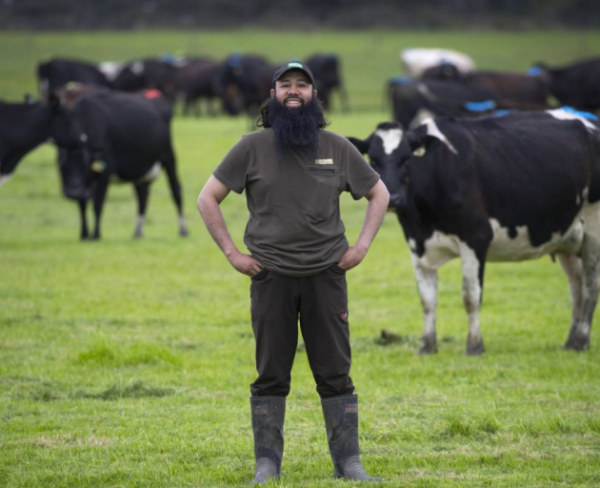 The throaty roar of the Harley Davidson booms off the brick and stucco houses of an otherwise quiet, nondescript street at the bottom of the world. Wavy dark hair flows behind a black helmet, beard flutters out front. Black leather jacket, blue Levis, R.M. Williams boots, the rider leans with the machine into the mosque’s driveway.

“Brent… good, mate,” he says. “Roughly how many you reckon? Oh yep, good as. I’ll get hold of Jenny shortly. Yeah na cheers for that man, bye.”

Bony fingers knead his long beard straight. Thick darned socks pulled up. “That was my digger driver,” Abdul-Jabbar says. “We’re busy ditching at the moment. Time of year, trying to get grass, crops, ya know? It’s a different pressure farming, but it’s a great thing.”

The adhan call to prayer sounds. A rhythmical urging that has sounded from minarets for centuries. Abdul-Jabbar clicks his phone to silent and tucks it inside his robe. The beard is again corrected. He kneels on a strip of knotted carpet to begin his personal prayers before climbing the pulpit to deliver his weekly khutbah, or sermon.

“My dear brothers and sisters, let us fear Allah…”

Abdul-Jabbar is not your typical Southland dairy farmer. Nor is he a typical Imam, or Islamic religious leader.

“Whereas in a lot of [Islamic] centres, the Imams are trained scholars, I’m more of a Massey-taught Imam,” grins the bike-mad designated leader of the Southland Muslim Association’s mosque – the southernmost in the world.

“Mine is not the most traditional pathway, but it goes to show that Islam isn’t limited to a certain background as it can be perceived. You can be anything and everything; it’s a way of life more than anything else.”

Abdul-Jabbar was born in Pontianak, the capital of the Indonesian province of West Kalimantan on the island of Borneo, in 1975. Raised Muslim, in multi-ethnic Borneo his upbringing was also far from traditional.

They lived on a sprawling urban section with orchards and mango plantations alongside deer, cockerels, and quail. They even had pet orang-utans.

“They were like brothers or sisters to me. We used to take them to town, holding hands, and get ice-cream. It was so cool,” Abdul-Jabbar says.

“West Borneo wasn’t like Jakarta, it was more like Auckland 20 years ago where everyone wanted a quarter-acre section. It gave me a good start to the farming thing.”

At the age of 7, he told his father he wanted to be a farmer. Together they formulated a plan to pursue his dream.

New Zealand’s global farming reputation was attractive and after some secondary schooling in Singapore, Abdul-Jabbar was accepted for his final year Glenfield College in Auckland.

He then studied agricultural science at Massey University before completing a Masters and becoming assistant herd manager on a 750-cow dairy farm outside Hamilton. Within months, he was promoted to farm manager at just 22 years old.

By then, he’d also met Silvia, a banking and finance major working for Westpac in Wellington. She shifted to Hamilton and worked at National bank before a stint at Ministry for Social Development and then starting a family.

After sharemilking in Rotorua and Winton, the Abdul-Jabbars bought 185-hectares south-east of Invercargill in 2007. They soon bought neighbouring properties and now operate two dairy farms and three support blocks, milking more than 1000 cows a day.

It’s been a great move for the Abdul-Jabbars and their five children: Aisha, 15, Hafsha, 13, Maryam, 10, Omar, 7, and 3-year-old Talha. Despite Southland being known as a conservative region, they’ve become prominent members of the local community.

Reza is a member of the Gorge Road School board of trustees while Silvia is on the PTA, while they both act as translators for police and as Consulate-general for the Republic of Indonesia.

Reza lectures for schools and other organisations while being involved in a research centre for dairy production. All the while running five farms, caring for five children, hunting wild geese, goats, and deer, touring Harley Davidsons across the Catlins, and praying to Allah six times a day.

“You can always sleep less,” Abdul-Jabbar says, tucking into stuffed chicken prepared earlier by Silvia. He spreads homemade chilli and passes the jar, warning with smile, that it’s got a kick.

“Yes, we’re busy, everyone is busy but you’ve got to give something. It’s good to make money and have businesses, but nothing is more rewarding than serving others. You can always do something, at lunchtime, in the evening. We have an open door policy at the farm here and it’s the same for the mosque.”

Taxis are parked out front, shoes stacked at the door. Latecomers shuffle inside, dropping coins or notes into a donation box, before kneeling on a prayer mat at the back of the room.

They shake hands and quietly offer greetings. It’s warm and stuffy inside the mosque, curtains shading the sun. Copies of the Holy Quran are stacked in ornate shelves but otherwise the room is sparse. Women and children listen to the sermon from behind an adjoining wall. Abdul-Jabbar’s youngest son, Talha peeks with wide brown eyes through a gap in the separating curtain.

“Muslims have an obligation in this life that supersedes personal fulfilment,” says Abdul-Jabbar from his pulpit, a tiered wooden chair with carved balustrades.

His weekly sermon, at 1.45pm every Friday, is a reflection of how he lives his life. “A believer is one who positively affects those around us.”

There was no mosque when the Abdul-Jabbars first landed in Southland ten years ago. They were involved in founding the Southland Muslims Association for the growing Islamic population.

The association bought a small industrial building in the sleepy Invercargill suburb of Hawthorndale and in 2010 opened a permanent masjid, or mosque, and community centre to serve around 80 Muslim families in the region.

At first, locals eyed the mosque with suspicion. It wasn’t helped when a passenger of a Pakistani-born driver launched a foul-mouthed anti-Islamic rant that was caught on camera about how he should “F*** off back to where you come from… you shouldn’t be in New Zealand in the first place … we don’t require your Muslim bulls*** in this country.”

The Southland Muslim Association accepted the remorseful Invercargill passenger’s subsequent apology and invited him to the mosque to broaden his mind on the religion.

And a year later, the congregation learned they were being covertly watched by undercover Security Intelligence Service (SIS) officers.

Prime Minister John Key confirmed at the time that mosques around New Zealand were being monitored after a Kiwi Muslim allegedly linked to Al-Qaeda was killed by a US drone strike in Yemen.

Christopher Havard had spent time in Invercargill around three years earlier and attended the mosque. Abdul-Jabbar said 27-year-old Havard had introduced himself as Saleem but there had been nothing to suggest radicalisation.

Since then, Abdul-Jabbar has worked closely with both security agencies and police, and welcomes people inside the mosque anytime.

“There is nothing to hide,” he says.

“Our main objective is to portray the right form or image of Islam to the community, in particular, and to the country as a whole. And it’s in our best interests that people are not misled.

“When you have people who have got the wrong understanding and blowing themselves up or inciting hatred, then you have to wonder: where did he or she learn that particular brand of Islam? Because it’s certainly not what Islam is supposed to be. With the likes of ISIS and Al-Qaeda, their targets are often the person who is unlearned. Or else it’s people who have nothing to lose.

“You wouldn’t do that if you had plenty to live for. You see bombings like Paris and London, those guys are losers. Their track histories are they are druggies or prostitution, that sort of thing, and then they want to be religious all of a sudden.”

Immigration New Zealand earlier this year named Invercargill as a new refugee settlement location because of its employment opportunities. A group of Colombians fleeing paramilitary gangs will be the first to be resettled in the area, with more expected from war-torn Syria.

It’s a move that Mayor Tim Shadbolt said had locals raising fears about the city becoming a resettlement location.

“Some people are very wary of it and think we may be inheriting a lot of social problems that are generated when you come from a war zone, but others are very tolerant of it,” Shadbolt said.

While Abdul-Jabbar admits that conservative Southlanders are wary of change, and can take time to accept newcomers, he believed it was “the best place in New Zealand”.

“If you conduct yourself well, show people respect and good manners, then they’re never going to be angry at you,” he says.

“And in the mosque, if you are preaching the same, the building blocks of society, it’s the same. Our job in Southland is easier than in most places.

“We have a lot of doctors and restaurants owners, respected, well-mannered people in town. You’d be pretty hard pressed to accuse your GP of being a terrorist. It’s good to know the community, but it’s more important that the community knows us.”

After Abdul-Jabbar’s Friday sermon, the congregation quickly disperses, back to work or study. Little Talha bursts from behind the curtain, “Dad!” He’s desperate to return to the farm and ride the two-wheel motorbike.

Zamberi Matyounus shakes hands with the men as they leave. The white-bearded Malaysian who has lived in New Zealand for 35 years acts as a mentor and advisor to Abdul-Jabbar. The mosque has become integral to the lives of Southland Muslims, he says.

“It’s very important for our religion that we are all together,” says Matyounus. “Everyone, we are like brothers, we respect each other. Black, white, poor, rich, no matter what you are like, we are brothers.”

Once everyone has left, Abdul-Jabbar swaps his white robe for his leather jacket and tells Silvia and Talha he’ll see them at home. He straddles the Harley and phones back Brent the digger driver. I

It’s been a productive growing season and the outlook is dry. “Everything is looking good eh,” he says, firing up the motorbike, flicking down his visor and riding into the high afternoon sun.