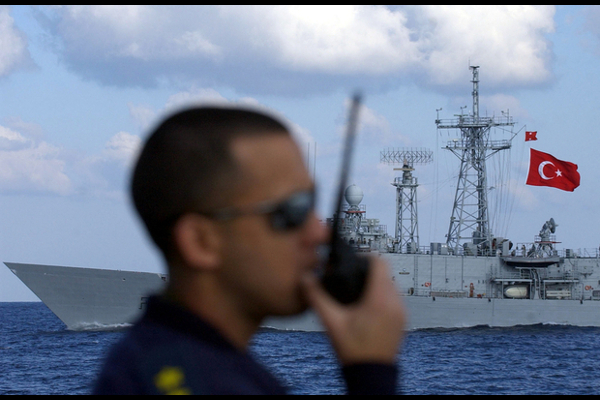 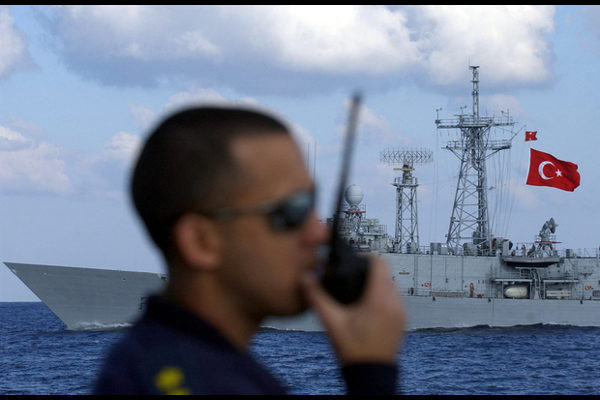 ISTANBUL — Turkish President Recep Tayyip Erdogan is taking a hard line against nations and foreign energy companies exploring for gas in the eastern Mediterranean, warning them not to “step out of line” and encroach on his country’s territorial rights.

“Let them not think that the search for natural gas in Cypriot waters and opportunistic initiatives relating to islets in the Aegean have slipped our attention,” Erdogan said Tuesday as he addressed his ruling AK Party parliamentarians. Both Greece and Turkey claim the islets, known as Imia and Greek and Kardak in Turkish. The two countries nearly went to war in 1996 over ownership of the islets.

Erdogan made his remarks as Turkish warships continued to block an Italian ship from proceeding to search for energy in contested Cypriot waters.

“We warned Italy to not send oil company ENI to Cyprus for offshore drilling,” Turkish Foreign Minister Mevlut Cavusoglu said, adding that Ankara would defend what he said were Turkish Cypriot rights. Turkey claims as its own a part of the area designated by Cyprus for exploration. The government in Nicosia says Cyprus has a sovereign right to drill.

“The Turkish side made clear, what is unilaterally done [by Greek Cypriots] is totally unacceptable. The [exploration] blocks declared by the Greek Cypriot side overlap the blocks by Turkish Cypriot side,” said former Turkish Ambassador Mithat Rende, who had responsibility for energy issues in his country’s Foreign Ministry.

The latest dispute also has embroiled Egypt, with Cairo criticizing Ankara’s actions. Egypt and the Greek Cypriots have a partnership to search for energy together. The Egyptian Foreign Ministry’s official spokesperson, Ahmed Abu Zeid, said in a statement that no party can dispute the legality of the agreement on the demarcation of the maritime borders between Egypt and Cyprus.

In a related development, Greece says a Turkish coast guard vessel collided with a Greek coast guard boat off the disputed islets late Monday. No injuries were reported. The Greek vessel, however, was damaged. The Reuters news agency says Greece protested to Turkey over the incident and that the Turkish prime minister, Binali Yildirim, told his Greek counterpart, Alexis Tsipras, that Athens must take steps to decrease tension in the Aegean.

Earlier this month, the U.S. ambassador to Greece, Geoffrey Pyatt, warned of the danger of an “accident” between Greece and Turkey in the Aegean. The warning came as Athens claimed there had been a major surge in Turkish fighter jets infringing on its airspace over the waters.

“What we are seeing is an aggressive [Turkish] nationalist rhetoric, backed by action, exactly like Russia. Its quite likely to result in a confrontation,” warned political scientist Cengiz Aktar. “Turkey’s foreign policy is a return to the 19th century, based on the affirmation of the power. It’s a muscle-flexing policy. This aggressive foreign policy feeds the nationalist feelings in the country. It’s very functional for the regime in the upcoming elections.”

Turkey is due to hold local, general and presidential elections by 2019.

The potent combination of electoral politics shaping foreign policy makes Ankara unpredictable, analysts say, in a region bereft of unresolved disputes. “This all has a history; it’s very much embedded in concepts on national causes, both on the Greek side and the Turkish side,” said political columnist Semih Idiz of Al Monitor website. “So Erdogan has to appear determined. This is one issue he has to be seen protecting Turkey’s rights in the Aegean and Cyprus; in effect he is playing to the nationalist gallery.”

“Anything can happen at any time – a [Turkish] adventure in the Aegean [Sea] would mean occupation of a small island. For Cyprus, it would mean the annexation of the northern part of the island,” said political scientist Aktar. Northern Cyprus is administered by a Turkish Cypriot government and recognized internationally only by Ankara. The rest of the island is ruled by a Greek Cypriot administration. Cyprus was partitioned after a 1974 Turkish invasion of the island following a Greek-inspired coup.

The past couple of decades have seen diplomatic flareups among Ankara, Athens and Nicosia. The trouble occasionally has involved Ankara using strong rhetoric. Analysts point out that such disputes were contained by Turkey’s bid to join the European Union, given that Ankara was aware any spilling over of diplomatic tensions into violence or even the very threat, likely would end its membership aspirations.

Given that Turkey’s EU bid is widely considered dead for the foreseeable future, the region could be entering a new era, according to Aktar. “There are no more checks and balances that a future [Turkish] membership of the European Union is providing – owing to the difficult bilateral relations between the two countries [Greece and Turkey] and this is new, and that opens the door to a very dangerous future,” Aktar underscored.