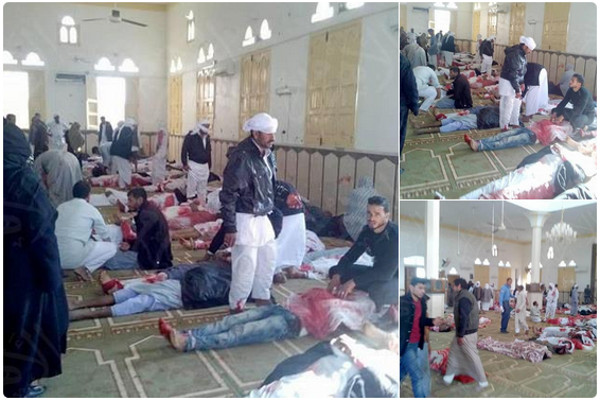 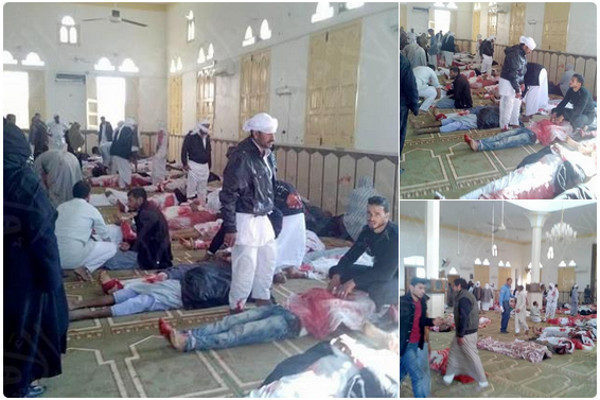 At least 235 have been killed in a suicide bomb attack as people gathered for Friday prayers at a mosque in North Sinai, according to Egyptian state media reports.

The Al-Ahram website also reported that at least 125 people were injured in the attack which took place on Friday afternoon.

Egypt’s President Sisi vowed a “brutal” response to the attack in comments made on Friday.

“Justice will be served against all those who participated, contributed, supported, funded, or instigated this cowardly attack,” Sisi said in a statement.

Militants were reported to have fired on worshipers during the attack which took place in the Al-Rawdah mosque in the town of Bir al-Abd, 40km from the North Sinai provincial capital of Al-Arish.

The mosque is understood to include adherents of the Sufi interpretation of Islam whose followers have faced numerous attacks by militants linked to the ISIS group who operate in the peninsula region bordering Israel and the Gaza Strip.

No group has claimed responsibility for the attack but militants have carried out a series of attacks in North Sinai in the past few years with targets including police and soldiers, members of Egypt’s Coptic Christian minority and Bedouin inhabitants accused of working with the military.

A local from Al-Arish, who belongs to the Sufi order, told Middle East Eye that “attacks and harassments have been ongoing to our people”.

He added: “Since 2011 several shrines often honoured and respected by us have been blown to pieces whether by IEDs [improvised explosive devices] or RPGs [rocket-propelled grenades].

“Also this March, two of our loyal and pious elder sheikhs were beheaded by the terrorists.

Referring to previous attacks targeting Copts, he added: “The state did lots of things when the Christians were attacked – let’s see what it will do when Muslims are slaughtered when they are praying.”

In response to the attack, officials from the Egyptian presidency announced a three-day mourning period.

Gaza’s Rafah border crossing with Egypt had been due to reopen on Saturday for three days.

But an official in Gaza, speaking on condition of anonymity, said it will remain closed.

“The Egyptian side informed us that Rafah will not reopen on Saturday because of the tragic events in Northern Sinai,” the official said.

Ministry of Health spokesman Khaled Mujahid said the militants set off a bomb during the attack. His comments were published in the state-backed Al-Ahram newspaper.

A source affiliated with the North Sinai Security Directorate said after the bombing at least five 4×4 cars stormed the area of the mosque and opened fire at civilians.

He said that the death toll is expected to rise, as there “were around 50 ambulances who transported bodies and individuals to hospitals”.

He also said that “some of the ambulances were attacked by militants, but we are not sure about the results of this yet.

“Roads leading in and out or Arish and Bir al-Abd are closed, with special forces deployed to capture the terrorists.”

Mujahid said a state of emergency had been declared by local authorities.

The New Arab reported that large crowds of young men were gathering hospitals in Arish and Bir al-Abd to give blood to the victims of the attack.

Friday’s assault appears to be the deadliest yet in a series of attacks carried out by militants on civilians and military targets in Egypt in recent years which has seen hundreds killed.

On Monday, 18 Egyptian policemen were killed in a bomb and gun attack on a security convoy in the north of the Sinai Peninsula.

ISIS claimed the attack through its propaganda arm, Amaq.

The militants also claimed responsibility for detonating a bomb on Metrojet Flight 9268 in October 2015, an attack which left 224 people dead.