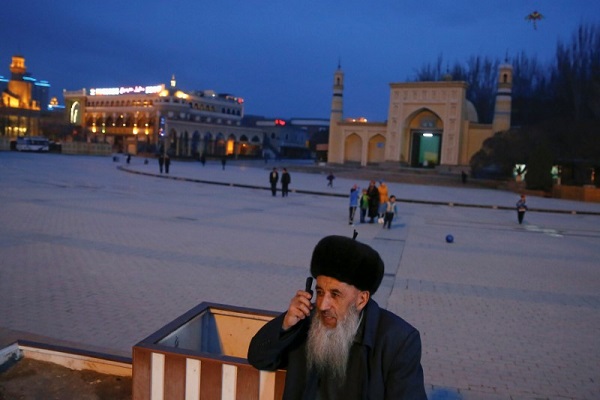 An ethnic Uighur man talks on the phone in front of the Id Kah Mosque in the old town of Kashgar, Xinjiang Uighur Autonomous Region, China, March 22, 2017. REUTERS/Thomas Peter

By: Caroline Mortimer The Independent

A majority Muslim group in China have been banned from using its language in schools.

Recent years have seen bloody clashes in the region, which the Chinese government blames on Islamist militants and separatists. But rights groups say the unrest is more a reaction to repressive policies, and argue that the new measures may end up pushing some Uighurs into extremism.

Although the Chinese government recognises 56 different ethnic minorities – including Uighurs – in the country, they have tried to crack down on expressions of individuality to create a homogenous society under Communism.

In late June, the Education Department in Hotan province (Hetian in Chinese) issued an a five-point directive which forbade teaching in the Uighur language in schools.

Schools must “insist on fully popularising the national common language and writing system according to law, and add the education of ethnic language under the bilingual education basic principle”, Radio Free Asia reported.

It said schools must ban the use of Uighur language in “collective activities, public activities and management work of the education system” and “resolutely correct the flawed method of providing Uighur language training to Chinese language teachers”.

When children go back to school in the Autumn, it said that Mandarin “must be resolutely and fully implemented” for the three years of preschool, and then “promoted” from the first years of elementary and middle school “in order to realise the full coverage of the common language and writing system education.”

It warned that any school which “plays politics” and refuses to implement the edict will be accused of being “two-faced” and shall be “severely punished”.

The national government in Beijing says it is attempting to introduce a “bilingual system” in the region’s schools to facilitate the dual use of both Mandarin and Uighur, but in practice schools in the region are being forced to be monolingual.

Ilshat Hassan, the president of the US-based Uighur American Association, said the regional government was breaking China’s own laws on the respect of ethnic minorities.

Mr Hassan said the new policy is designed to “eradicate one of the most ancient Turkic languages in the world.”

He said: “By enforcing this new policy at the preschool level, the Chinese government intends to kill the Uighur language at the cradle. It is nothing short of cultural genocide. The international community must not allow China to destroy our beautiful language and culture, which has thrived for several millennia.”