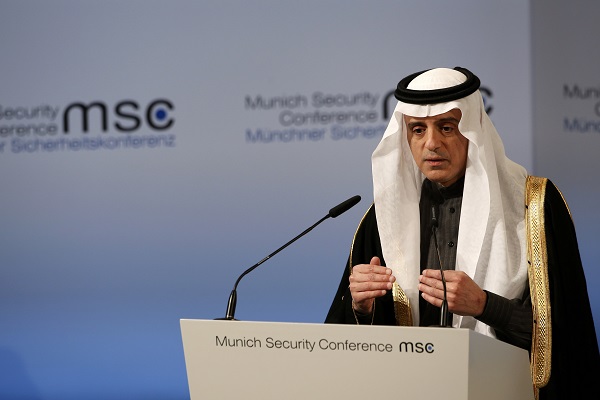 By: Maher Chmaytelli and Ahmed Rasheed

BAGHDAD (Reuters) – Saudi Foreign Minister Adel Al-Jubeir made a rare visit to Baghdad on Saturday in a new attempt to heal the Sunni kingdom’s troubled relations with Shi’ite-majority Iraq.

Improving relations between Riyadh and Baghdad would help foster reconciliation between Iraq’s Shi’ite and Sunni communities in the period after Islamic State’s defeat.

A U.S.-backed campaign has forced out Islamic State from most Iraqi cities it captured in 2014 and the ultra-hardline Sunni group is now fighting off an offensive in its last major city stronghold, Mosul, in northern Iraq.

Iraq lies on the fault line between Shi’ite Iran and the mostly-Sunni Arab world. Iran, by leveraging its ties with Iraq’s Shi’ites, has emerged as the main power broker in Iraq after the United States withdrew its troops in 2011.

“The kingdom stands at an equal distance from all Iraqis communities making up Iraq and supports the unity and stability of Iraq,” he told reporters.

“The visit is a Saudi attempt to balance Iran’s role in Iraq,” Ahmed Younis, a professor of international relations at the University of Baghdad, told Reuters.

“It’s a message that the kingdom is keen that the Sunnis take their role and not be marginalized,” he said.

Iraq’s Sunnis have been complaining of persecution and marginalization following the 2003 U.S.-led invasion of Iraq which toppled Saddam Hussein and empowered the Shi’ite majority.

Jubeir’s visit to Baghdad is the first by a Saudi foreign minister since 1990.

Sabhan was the first ambassador appointed by Saudi Arabia after it reopened its embassy in Baghdad, in December 2015, ending a 25-year break.

The reopening of the Saudi embassy in Baghdad, closed in 1990 after Iraq invaded Kuwait, was seen as heralding closer cooperation against Islamic State, which controls territory in Iraq and in Syria and has claimed bombings in Saudi Arabia.

Losing Mosul would end the militants’ dream of establishing  a state but they still control swathes of territory in Syria and patches of northern and western Iraq from where they could fight a guerrilla-style insurgency and plot attacks in other countries.

“It’s the hope of kingdom of Saudi Arabia to build excellent relations between the two brotherly countries,” Jubeir said.

“There are also many shared interests from fighting extremism and terrorism or opportunities for investment and trade between the two countries,” he added.

Saudi Arabia and Iraq are the first and second largest producers of the Organization of Petroleum Exporting Countries and are often in competition for crude clients, mainly in Asia.

The two countries cooperated in November to bring about an agreement between OPEC members to reduce supply to markets to support crude prices.