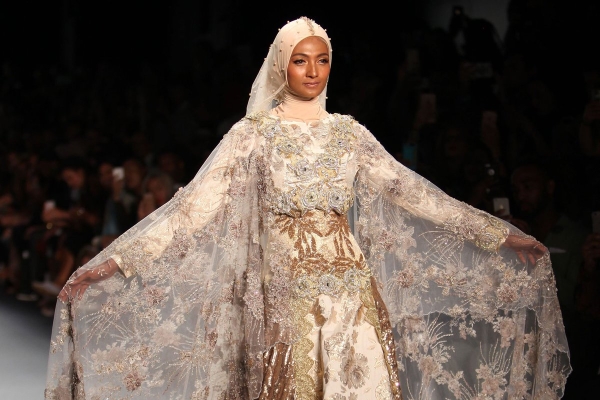 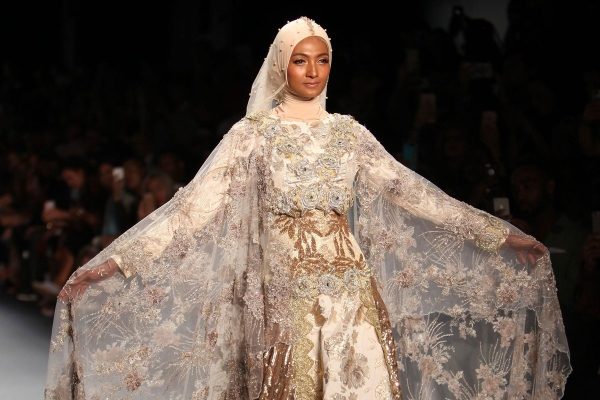 Over the past few years, we have seen the hijab merge into British culture with more women in the public domain wearing the headscarf than ever before, such as Great British Bake Off winner Nadiya Hussain. “Modest wear” is the newest trend on the block to diversify the face of contemporary fashion.

Ten years ago, as a hijabi (headscarf wearer), I faced the constant battle to find clothing that looked good and didn’t compromise my religious beliefs. My wardrobe often consisted of plain, boring and oversized tops, straight leg denim jeans, neck scarfs that doubled as makeshift hijabs, and a mountain of maxi skirts I care not to count. I yearned for modest clothing that was easy to wear and didn’t require layering – a must for sheer fabrics. It’s fair to say I was a walking fashion disaster; even Trinny and Susannah would have refused to help me. However, since then, modest fashion has taken the industry by storm and is now becoming widely celebrated.

Yesterday, we saw the emergence of the UK’s first ever London Modest Fashion Week, set up by UK-based company Haute Elan, which took place in the iconic Saatchi Gallery. Featuring more than 40 brands from around the world, London Modest Fashion Week is far from Muslim exclusive but simply adheres to our values – or anyone from any faith looking for a more demure look.

UK high streets are also buying into the trend with Debenhams soon to become the first major UK department store to sell hijabs as part of a new range of Muslim clothing. The selection will offer tops, dresses, jumpsuits, kimono wraps, caps, hijab pins and headscarves. London-based clothing brand Aab, which is behind the line, describes itself as selling “contemporary modest wear” for women.

It’s important to note that while getting modest fashion on the high street is a victory for Muslim women, it’s not just for us. Over the years we have seen many celebrities sporting the trend, even on the red carpet. For example, at this year’s Grammy Awards, singer Adele wowed audiences in an olive green, floor-skimming Givenchy Haute Couture gown, with a checkered bodice and delicate beaded sleeves. The dress hails from the autumn/winter 2016 collection, which featured no sleeves – however, Adele’s customisation added long sleeves for a touch of elegance.

In 2016, France introduced a burkini (full body swimwear) ban which was later overturned. Since then, the burkini has remained a controversial topic. While critics look at burkinis as oppressive pieces of clothing for Muslim women, the reality is very different. The burkini first appeared in the UK limelight when TV chef Nigella Lawson wore the head-to-toe three-piece garment on holiday in Australia in 2011. She later explained that the outfit allowed her to avoid reapplying sunscreen after swimming.

Modesty is not to be forced on anyone and means different things to different people, but always remains a choice for women.

Last year, Marks and Spencer launched a burkini as part of its summer and spring 2016 collection. It quickly sold out and proved popular with British customers. Aheda Zanetti, the Australian-Lebanese designer who created the first burkini more than 10 years ago, insists it has little to do with Islam and was intended to give women more freedom, rather than take it away. She adds that over over 40 per cent of burkini sales are from non-Muslim women.

Modest wear is being introduced to add variety to the UK fashion industry and doesn’t just mean the introduction of hijabs and burkinis – it also means clothing that offers more coverage for a wide range of women from different cultures and religions. Fashion should be an inclusive and empowering form of self-expression, available to everybody.

We have also seen a wider diversity of faces in major fashion campaigns. Most recently, Kanye West featured hijabi model Halima Aden in his New York Fashion Week presentation. Aden stood out as a young woman who was committed to her beliefs and willing to challenge industry ideals.

Mariah Idrissi has also revolutionised the fashion industry by becoming the first hijab-wearing model to be signed to one of the top 10 global modelling agencies – Select Models. She also become the first model to wear a hijab in a major fashion campaign, when she featured in H&M’s Close the Loop campaign last year. She also recently modelled for Aab. The London-based public speaker champions the freedom to wear modest fashion for all women and wants to become a positive role model, regardless of religion.

“I don’t feel there should be a distinction between modest fashion and modern fashion as modesty is religionless. Modesty is a personal choice the same way you would choose flats over heels or vice versa.”

There is no doubt that we are seeing more demure looks in today’s industry as the hijab and modest wear trend enter popular culture. They are a celebration of the inclusion of diversity in modern fashion. To see Muslim women and popular fashion brands leading the way to provide more choice for all women is truly inspiring.