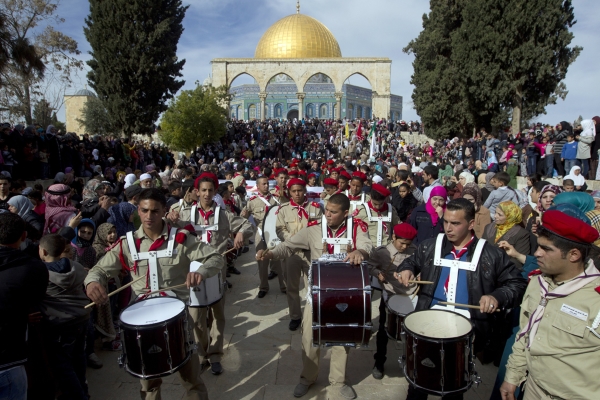 Palestinian scouts in a ceremony commemorating the birth of Prophet Mohammed, known in Arabic as "al-Mawlid al-Nabawi"outside the Dome of the Rock the Al-Aqsa mosque compound, Islam's third holiest site, in the old city of Jerusalem on January 24, 2013. AFP PHOTO/AHMAD GHARABLI (Photo credit should read AHMAD GHARABLI/AFP/Getty Images)

This coming week, Muslims worldwide will commemorate the birth of the Prophet Muhammad, known as Eid Milad un-Nabi, Mawlid al-Rasul, or by many other regional variants.

From the United States to Morocco, Egypt to the Muslim-majority countries of southeast Asia and as far away as Japan, public processions, parties and feasts will take place to mark the birth of Islam’s prophet, who is said to have been born on on the 12th of Rabi al-Awwal – the third month of the Islamic calendar.In most Muslim-majority countries across the world, this day will be marked as a public holiday on December 12 including in Pakistan, Egypt, Malaysia and Morocco.

In Egypt alone, over 4,000 mawlid celebrations and carnivals are estimated to take place every year, with millions in attendance to pray, sing and enjoy performances of Sufi dance rituals, including the whirling of the dervishes that has become symbolic of Sufism – a spiritual path within Islam.

Meanwhile, in Indonesia, Malaysia and Singapore, commemorations led by local preachers said to be Yemeni descendents of the Muslim Prophet, known locally as ‘Habib’ or ‘Habaib’ [pl.], can attract hundreds of thousands of devotees on the islands of the Malay archipelago.

Yet, while many find this occasion to be a cause for celebration, Mawlid season is often preceded by heated debate and division within Muslim communities.

This is because the celebration of the prophet’s birth, which is sometimes referred to proudly, or often disparagingly by puritanical hardliners, as the ‘Muslim Christmas,’ has for hundreds of years been a controversial topic among some.

With the rise of literalist interpretations of Islam, particularly that of the Salafist strain in the last two centuries or so, this has become increasingly the case.

It is for this reason that while the streets of Fez or Karachi will be lit up on December 12 with lanterns and the smiling faces of people young and old, Saudi Arabia will be one of the only Muslim-majority countries where no public holiday, or indeed state-sponsored public celebrations, will take place.

This is because the Salafist persuasion of Islam touted by Saudi Arabia, often referred to as Wahhabism, views the event as a reprehensible religious innovation that was not sanctioned by Muhammad or his early followers.

While the colourful processions, tasty treats and moving displays of religious devotion on offer may be of more interest to the casual observer than Mawlid’s scriptural basis, the celebration of the Prophet’s birthday offers an interesting insight into how the Muslim world defines itself – and indeed how it is defined from the outside.Without getting lost in the myriad of religious debates, there are a few points that remain pertinent to popular Western discourse on modern Islam.

The ‘good’ and ‘bad’ Muslim

In between, of course, are many millions who ascribe to neither, but will partake or abstain for reasons unrelated to religious obligation or prohibition.

Sufism, in the romanticised Western psyche, is often presented as Islam’s peaceful minority sect that screams for a voice.

It is the Islam that MTV presenter Kristiane Backer turned to after years in showbiz, and the Islam that Britain’s Prince Charles has for long shown an active interest in.

On the other hand, we have the dark spectre of Wahhabism [Salafism], which has supposedly come to dominate the Muslim world, funded by petro-dollars and promoted by crazy clerics.

Neither portrayal is entirely true. While Salafism has grown due to Saudi state sponsorship, the Muslim world remains a diverse patchwork of religious understandings of all shades – regardless of what Saudi Arabia wants or likes.

Furthermore, the fact that Mawlid celebrations will take place in almost every Muslim country dispels the myth that Sufism is a minority strand of Islam. This does not mean that most Muslims are Sufis, but that Sufism deeply permeates Muslim practice and societies.

And why does this matter? Because Sufism is often presented in the West – when it is given coverage – as the ‘peaceful’ Islamic alternative, practiced only by a harmless few.

Here, it must be remembered that Sufi Muslim mystics have historically never shyed away from violence, most notably in Algeria, Chechnya and Libya, where staunch adherents of this spiritual path led armed anti-colonial rebellions.

But it is also Sufi-dominated organisations, like the al-Azhar University in Egypt, that are used to push government lines and crush popular dissent.

This shows just how integral and influential Sufism is in the modern Muslim world, but also how it must not be over-simplified by labels.

At the same time, as unpalatable as the puritannical precepts of Salafism may be to some Muslims, not all adherents of this strand of Islam ascribe to violence and condone terror.

Adhering to sectarian narratives and labels has also been unhelpful in understanding other areas of contention in the Muslim world, where Shia Islam has been presented as a less-harmful alternative to the West than Sunni Islam, which has been hijacked by the Islamic State group, al-Qaeda and their kin.

A brief look at the conflict in Syria shows that terror has no sect, but rather is perpetrated in the name of Sunnism, Shiism and secularism alike.

In the end, simple labels speaking about ‘peaceful’ or ‘dangerous’ strands of Islam largely distort perceptions of the Muslim reality.

They undermine the rich diversity of the Muslim world and underestimate its complexity. Moreoverover, such labels can be used to play into a need to distinguish a ‘good’ and a ‘bad’ Muslim – with the Salafist most certainly playing the ‘bad’ Muslim – for now.