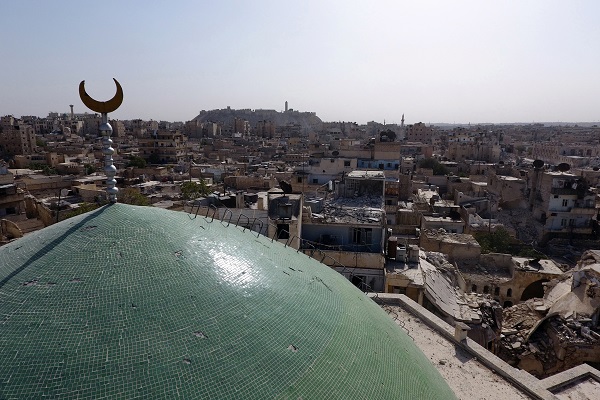 A view taken with a drone shows the minaret of Osama Bin Zayed mosque along with damaged buildings in the old city of Aleppo, Syria. REUTERS/Abdalrhman Ismail

Syria’s foreign minister on Sunday rejected a United Nations proposal that would grant autonomy to the devastated eastern sector of Aleppo, where rebels seeking to topple the government are locked in a months-long battle with government forces and their Russian allies.

Under the U.N. proposal, the Damascus government would allow rebel-held eastern Aleppo to be governed by a local administration if jihadists fighting alongside rebels leave the city.

“This is completely rejected,” Foreign Minister Walid Muallem said of the proposal in televised comments in Damascus, after meeting with U.N. special envoy Staffan de Mistura. “This [proposal] is a violation of our sovereignty.”

For his part, de Mistura offered no public comment on Syria’s rejection of the U.N. autonomy proposal.

But he used the news conference to propose sending a U.N. verification team to Aleppo to examine widespread claims that government aircraft have bombed and knocked out a series of hospitals in the city’s eastern sector in recent days.

“Since we do have a difference of opinion between the Minister Muallem, saying there is a total denial of any aerial bombing of hospitals in eastern Aleppo… then perhaps we should be allowed to send a verification team on the U.N. side… to verify damage in both east and west Aleppo,” de Mistura said.

It was not clear whether de Mistura raised the verification proposal during closed door talks that preceded his comments.

Rebels and medical workers say the last remaining hospital in eastern Aleppo was bombed and largely destroyed on Friday, leaving at least 250,000 civilians trapped in the fighting without a fully functioning medical facility.

The Britain-based Syrian Observatory for Human Rights said at least 240 people have been killed in eastern Aleppo and in the rebel-held countryside west of the city since Tuesday, when Syrian aircraft and Russian warplanes resumed bombings in and near the war-torn city after a two-week lull.

Meanwhile, Foreign Minister Muallem said there were “positive changes” in the international arena, in an apparent allusion to the recent U.S. presidential election win by Donald Trump. Syrian President Bashar al-Assad has called Trump a “natural ally” in the fight against terrorism in a TV interview several days ago.

He called the situation in eastern Aleppo “catastrophic,” and urged the international community to pressure Russia and Iran to stop their offensive.

U.N. envoy de Mistura told the Guardian newspaper the Syrian government was pursuing a “Pyrrhic victory” in Aleppo if it fails to reach a political solution with the opposition.

Ed Yeranian contributed to this report from Cairo.