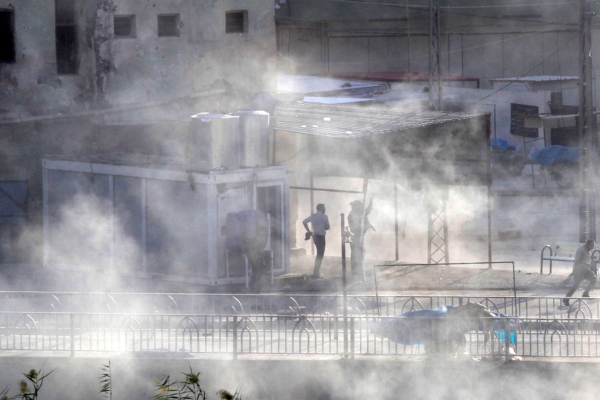 HASSAN SHAM, KURDISTAN IRAQ – ISIS militants launched an assault Friday on the northern oil city of Kirkuk, drawing troops and resources away from the battle toward Mosul as Iraqi and Kurdish Peshmerga forces continue to move in on the country’s second-largest city.

A suicide attack Friday on an Iranian-run construction site in the town of Dibis in northern Iraq also killed at least 14 people, including four Iranians. Six Iraqi police and 12 ISIS fighters were killed during a similar attack on a police compound in Kirkuk earlier in the day, but local news sources say armed militants are still occupying civilian houses and fighting with security forces.

A Kurdish commander told VOA’s Kurdish service that the Kirkuk attack was the work of ISIS sleeper cells in the city trying to distract government fighters from the ongoing offensive against ISIS-controlled Mosul. The commander said the group occupied a hotel in the city center and battled with Kurdish security forces for hours. At least 25 people were also wounded in the fight.

The Kurdish security forces said the goal of the attacks appears to be to disrupt Iraq’s oil industry.

But U.S. military officials disagreed. They said Friday the ISIS-assault on Kirkuk was intended to force Iraqi and Kurdish leaders to divert their forces and their focus from the ongoing operations to retake Mosul.

And on the road from Mosul, at least one brigade of Peshmerga soldiers packed their tanks on transport trucks and headed to Kirkuk to reinforce local security forces.

“The situation in Kirkuk today is nervous,” said Staff Brigade Rehwar Amin, as his soldiers’ trucks sped away. “And that’s why we’ve been given the order to turn back to Kirkuk to hold the frontline.”

Still, U.S. officials said the impact on the Mosul operation seems to have been minimal.

At least five suicide bombers attacked the main police headquarters. One of them was shot dead by police before he managed to explode his suicide vest.

The ISIS group quickly claimed responsibility for the attacks.

Kirkuk Governor Najmadin Karim was quoted by the Kurdish television station Rudaw as saying the militants had not seized any government buildings in Kirkuk, though two ISIS fighters were still holed up in a hotel. Sporadic clashes continued in parts of Kirkuk as the day wore on.

Several hours after the attack on the police compound, three suicide bombers made their way into a power plant under construction outside Kirkuk in the town of Dibis and blew themselves up, killing at least 11 people.

“When they are surrounded by Peshmerga,” said soldier Farhan Ibrahim, who goes to the front several times a day to fix vehicles and gas up tanks, “they blow themselves up.”

U.S. military officials warned that the attack on Kirkuk will likely not be the last as ISIS attempts to draw as many U.S. and coalition-backed forces away from the frontlines in and around Mosul.

Iraqi and Kurdish forces have also been told to brace for more high-profile, so-called spectacular attacks, like the recent string of suicide bombings in Baghdad.