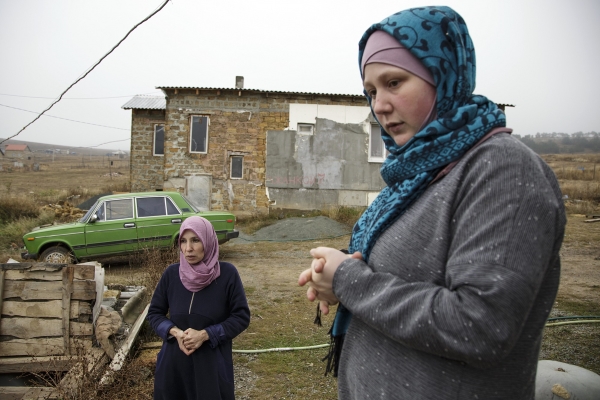 SIMFEROPOL, Crimea – Standing at the door to her house in Stroganovka, a suburb of Simferopol, Fera Abdullaeva apologizes for the mess inside. There are boxes of potatoes brought by concerned neighbors, and more boxes of clothes and belongings gathered together after a pre-dawn search by Russian security services on Oct. 12 turned the house upside-down.

Uzeir, along with four other men arrested in simultaneous raids, is accused of forming a cell of the pan-Islamic organisation Hizb ut-Tahrir. Their arrests bring the number of Crimean Muslims detained or sentenced on identical charges to 19 since Russia annexed Crimea in 2014.

“About a week ago I had the idea that now the festivals and Hajj pilgrimages are finishing, probably the searches will begin again, and I was right,” Fera said. “There have been searches about every half year, and we expected it, because so many Muslims have already been searched, and some have been sentenced already… But we still weren’t ready for it.”

Hizb ut-Tahrir, a global movement which calls for a world-wide Caliphate or Islamic government, is banned in a number of Muslim countries; in Germany there is an administrative ban on it for anti-Semitism. In Russia it has been ruled a terrorist organization since 2003, and hundreds of trials across the country, many of which are associated with torture, have handed down sentences of 10 years and more to alleged adherents.

Human rights organizations such as Memorial say the Russian law is not based on evidence and is used by authorities to repress religious and political dissent.

Hizb ut-Tahrir is legal in Ukraine and is quite widespread among Crimea’s indigenous Muslim minority, the Crimean Tatars. Following Russian annexation from Ukraine in 2014, some high-profile leaders quickly left the peninsula fearing prosecution. Searches and arrests followed, not only of followers of Hizb ut-Tahrir but also of Crimean Tatar activists who opposed annexation.

But Fera, who is Crimean Tatar, says she and her Azerbaijani husband never considered fleeing.

“What crime had we committed that we should abandon everything and leave?” she said. “If we were criminals of course we would have left, but instead we lived quietly with our children, and that says a lot I think.”

Fera does not hide that her husband and the other arrested men were a close-knit group of observant, conservative Muslims who discussed Islam. She shares her husband’s belief in Islamic government.

But she and other relatives deny any extremism or terrorism in those beliefs. Instead they link the arrests to political repression of Muslims and Crimean Tatars, likely to stir up further unrest.

“I think it must be political pressure on people, because there’s never been any extremism or terrorism or anti-government activity in their views or actions,” said Diana Zitulai, a relative of Ayder Saledinov, also arrested in Stroganovka. She was with several dozen family members and supporters crowding the corridors of a district court in Simferopol on Oct. 13, where all five men were sentenced to two months pre-trial detention. Outside, a group of men shouted curses at law enforcement officers who escorted the accused out of the building.

“This will just create more enemies,” Zitulai went on. “Because children will want to avenge their fathers.”

Fera and Uzeir have four children aged between 11 and 1, living in an unfinished house built by Uzeir. With his brother Timur, also arrested, Uzeir moved to Crimea from Azerbaijan in the mid-1990s and the two settled in Stroganovka with their families.

Stroganovka is one of several new suburbs of Simferopol – a city of 300,000 people located 800 kilometers south of Kyiv — built by Crimean Tatars in the 1990s, when they returned to Crimea from exile after the entire nation was deported in 1944.

The district still lacks water and paved roads, and the limited public transport here stopped on Oct. 12, the day of the arrests. But a strong community makes up for the lack of infrastructure. Locals clubbed together to build a mosque, and a small sports hall next to Fera’s house where Uzeir and Timur trained local boys in Taekwondo – both brothers were national and European champions in their native Azerbaijan.

On Oct. 14 the local imam and two community leaders, bringing the families money collected at the mosque after Friday prayers, insisted the brothers were active and upstanding community members – and were likely arrested for that reason.

“What they did shows what they were, and the sports hall and children’s playground were their work,” said imam Abdulgani Abdulganiev. He said he had never heard any reports of the brothers having undesirable religious ideas or being members of a sect. “If they had held some kind of different views, don’t you think we would have noticed?”

Anafi, the community leader accompanying the imam, did not want to give his surname to a journalist.

After the waves of fines, searches and arrests, a climate of suspicion and fear is palpable among Crimean Tatars, who became a minority in Crimea under Russia imperial rule before being deported in Soviet times. The vast majority of Crimean Tatars, over 12 percent of the Crimean population of 2 million people, opposed Russia’s annexation and have seen their governing body the Mejlis ruled an extremist organization since, and several Mejlis members prosecuted on charges of separatism.

“Are we who live here afraid?” Anafi said. “I’d say that our people have been in this situation for more than 200 years. So it’s not so much that we’re afraid now. We’re apprehensive about the lives of our wives and children and parents, but we’re afraid only of God.”

While cracking down on dissent, Russian policy towards Muslims in Crimea has also been conciliatory. Religious festivals have been made state holidays, Hajj pilgrimages to Mecca have been state-subsidized for more than 600 Crimean Muslims in the last two years, and there are promises to build the largest mosque in Europe in Simferopol.

Last year Uzeir completed the Hajj under the auspices of the state-sanctioned Crimean Muftiat, or Muslim spiritual board. His 27 days away were the longest he’d ever left his wife and children, according to Fera. “He promised me, Inshallah, we’d go together,” she said. “He said ‘I already know it and can show it to you. God willing, we will go.’”

Their shared dream is unlikely to be achieved soon.

The Crimean Muftiat has hastened to distance itself from court cases against both Hizb ut-Tahrir and the Mejlis, to which the Muftiat used to be closely linked. The Muftiat’s statement on these latest arrests was to call on Muslims to be “vigilant to the [Hizb ut-Tahrir] movement and take measures to protect themselves and their families.”

Of the 14 men previously arrested in Crimea on Hizb ut-Tahrir charges, four have been sentenced to seven and five years; the others have already spent months in pre-trial detention.

Lawyer Emil Kurbedinov, who is representing many of the accused Crimeans, said this latest case is proceeding according to arecognized pattern of trials in Russia, which have all ended in conviction.

“They are all identical,” he said. “There can only be one result. We think it is all under the control of the Federal Security Service, and there can be no independent verdict.”

In Stroganovka, the fear is that anyone unhappy with the current regime can expect a similar fate.

“It’s anyone who doesn’t want to put up with injustice, whether he’s Muslim or Christian or Crimean Tatar or Russian,” said Fera. “Any person who wants to speak the truth under these laws today can end up a terrorist, an extremist or a separatist, those three favorite stigmas.”