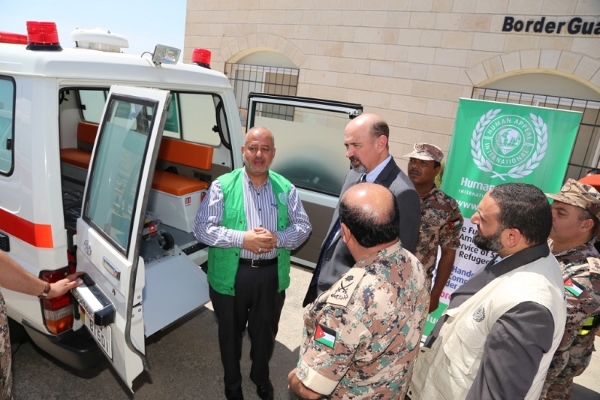 On Monday 5 of September 2016, Mr. Bashar Al-Jamal, director of Human Appeal Australia presented three ambulances to the Jordanian Army for the service of Syrian refugees. The official hand-over ceremony took place at Mafraq, northeast of the Jordanian capital Amman, near the Jordanian-Syrian border region and was attended by His Excellency the Australian Ambassador to Jordan, the honourable Mr Miles Armitage.

Since the beginning of the Syrian conflict, millions of people have fled the country. According to the UNHCR as at 18 September 2016 there were 656,400 Syrian refugees in Jordan. Thousands of these refugees have been stranded at the Jordanian border since it was closed. These unfortunate refugees suffer countless medical illnesses and emergencies that are hampered by the lack of available ambulances.

Mr Al-Jamal presented the three ambulances which were generously sponsored by the Australian community to Brigadier-General, Saber Al-Mahayra from the Jordanian Border Guard Forces. “On behalf of the Australian donors I present these ambulances to the Jordanian Army in support of the Syrian refugees during their time of desperate need,” said Mr Al-Jamal. Plaques of appreciation from Human Appeal Australia were presented to both Mr Armitage and Brigadier-General Saber Al-Mahayra.

The three ambulances were fitted with the latest medical equipment and will make a significant contribution to the emergency care and transportation of the sick and wounded refugees.

“Human Appeal Australia will always extend a helping hand to those in need. We are part of a global community and hence it is our duty to help our fellow brothers and sisters in humanity. We have been supporting distraught Syrian people since the beginning of their conflict and will continue to do so until their plight is resolved,” added Mr Al-Jamal.