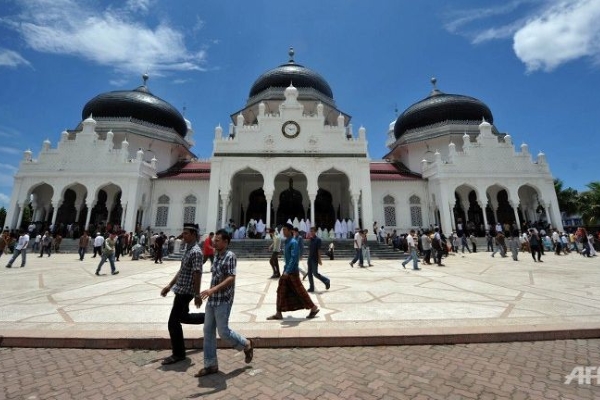 The decision to give female civil servants six months’ maternity leave, double the typical amount elsewhere in the country, is an unusual move in a province routinely criticised for breaching women’s rights.

However it has sparked a row with the central government in Jakarta, which says it runs counter to national law that stipulates three months maternity leave.

Andreas Harsono, Indonesia researcher for Human Rights Watch, welcomed the move: “They’re becoming more progressive.” However he added Aceh still “has a lot of work to do in reviewing discriminatory bylaws”.

The devout western province is the only part of the world’s most populous Muslim-majority country allowed to implement Syariah laws and is often criticised by rights groups.

There are canings for people caught gambling, drinking alcohol, spending time with members of the opposite sex outside of marriage and having gay sex.

Public lashings, often well attended, are carried out and Syariah police target women for such offences as failing to wear a headscarf.

It applies to around 92,000 female civil servants in the province. Employees will be paid for the first three months although the law is not clear on what happens in the final months.

Yenni Linda Yanti, 35, a nurse at a government hospital in Aceh, was the first person to benefit from the new policy.

“I am happy – now I have more time to spend with my child,” she said.

Aceh was granted broad autonomy in 2001, including the right to introduce Syariah law, in a bid to quell a separatist insurgency.

Activists say there has been a rapid growth in Islamic regulations since a peace deal was struck in 2005.