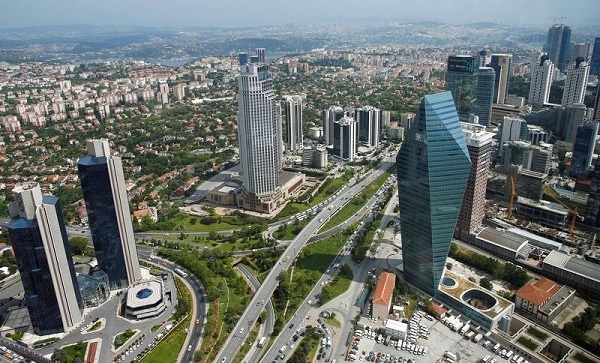 Bussiness and financial district of Levent, which comprises leading Turkish companies' headquarters and popular shopping malls, is seen from the Sapphire Tower in Istanbul, Turkey May 3, 2016. REUTERS/Murad Sezer/File Photo

By: Asli Kandemir and Nevzat Devranoglu

ISTANBUL/ANKARA (Reuters) – On the first trading day after Moody’s downgraded Turkey’s sovereign rating to “junk”, the reaction in Istanbul and Ankara was swift and predictable — stocks and the lira took a beating and policymakers accused the agency of playing politics.

But the market fall-out was relatively short-lived, and less than some had feared. By afternoon the lira recovered much of its losses and investors paid more than expected in three bond auctions, showing strong demand for the very debt Moody’s now classifies as sub-investment grade.

Yet again, Turkey’s markets appear to be weathering the storm, as investors focus on its relatively robust economic fundamentals and the considerable potential of its young, 80-million-strong population.

Moody’s on Friday cited worries about the rule of law after the July 15 failed coup, as well as risks from a slowing economy as drivers for its downgrade. Growth in economic output dipped to 3.1 percent in the second quarter from 4.7 percent in the first quarter and was seen slowing further.

“While the decision was not entirely unexpected, it’s still a severe blow to Turkey’s reputation and shows the extent to which the post-coup crackdown has undermined the country’s institutional framework in the view of the agencies,” said Nicholas Spiro, partner at London-based Lauressa Advisory.

However, analysts noted that Turkey could prove resilient despite the downgrade.

“Long term it has many merits like a young population, a big consumer base and you have, of course, a strong corporate and banking sector,” said Sergey Dergachev, senior portfolio manager at Union Investment Privatfonds in Frankfurt.

Some 100,000 people have been either sacked or suspended from the civil service, military and police following the failed coup. Another 40,000 have been detained. Turkey’s Western allies and rights groups worry that President Tayyip Erdogan is using the coup as a pretext to curtail dissent.

The government says the measures are necessary to root out the followers of the U.S.-based cleric Fethullah Gulen, whom it blames for orchestrating the coup. Gulen, who has lived in self-imposed exile in Pennsylvania since 1999, has denied the accusation and condemned the coup.

Turkey depends on investment to fund its current account deficit — one of the biggest in the G20 — and service its foreign debt, requiring more than $200 billion a year. JP Morgan warned in July that a downgrade to junk could prompt the sale of $10 billion in Turkey’s sovereign and corporate debt.

Sub-investment grade ratings can spark a sell-off because more conservative funds, such as those that manage pensions, are often required to hold bonds that are rated as investment grade by at least two ratings agencies.

Fitch Ratings is now the only one of the three major ratings agencies that still rates Turkey at investment grade. It is due to review that rating at the start of 2017.

But for funds that can hold riskier debt, Turkey may become an investment opportunity.

“If it’s an (investment grade)-only rule you are a forced seller, but for some mandates who are able to hold high yield, such a sell-off is a good re-entry opportunity as well,” said  Dergachev at Union Investment Privatfonds.

For some analysts, even at “junk” status, Turkey is a more attractive prospect than South Africa, which is facing its own political turmoil with investor doubts about President Jacob Zuma.

“This seems perverse given the political/policy setting in South Africa, (and) worse ratios over Turkey,” said Timothy Ash of Nomura International in London.

Analysts often point to concerns about Turkey’s rising household debt-to-GDP ratio, which reached a record high of 21.8 percent in the first quarter of 2015, and stood at 19.4 percent at the end of last year, according to IMF data.

While that corresponds to a 174 percent increase over the last decade, it is still less than half of South Africa, where the household debt to GDP ratio is at 46 percent.

“Now it is out of the way, one risk factor has been removed,” said Nomura’s Ash. “Proves there is life in junk bond status – as Russia, Hungary, Croatia, et al will tell.”