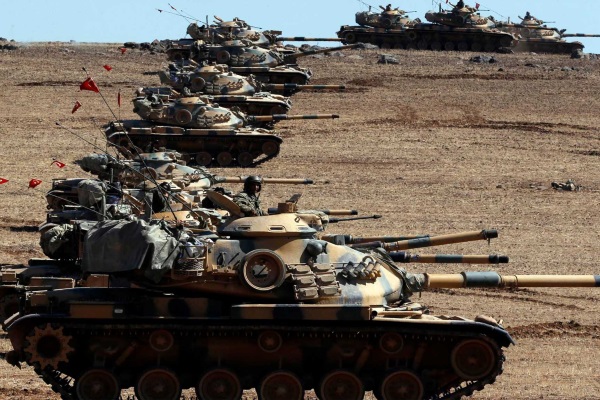 PENTAGON — There’s a small town in Syria where ancient Islamic prophecies say a fierce battle will bring about the end of days, and Turkish troops, U.S. military advisers and vetted Syrian opposition fighters appear to be heading straight for it.

Dozens of U.S. special forces are advising Turkish troops and Syrian opposition forces as they push farther into Syria, specifically into an area that includes the town of Dabiq, defense officials told VOA on Wednesday.

According to early Muslim prophecies, Armageddon will be ushered in with a major Muslim victory against “Romans” in either Dabiq, less than 15 kilometers from the Turkish border, or al-Amaq, another town near Syria’s border with Turkey.

Islamic State has interpreted this “Roman” army to be coalition and coalition-backed forces.

The prophecy continues to say that one-third of the Muslim army will run away, another third will be killed, and one-third of the army will win the battle and later conquer Constantinople, the modern-day Turkish city of Istanbul.

For Islamic State, a battle in Dabiq would symbolize that ancient Muslim prophecies could be coming true. For those who oppose the Islamic State terrorists, reclaiming the town from IS would mark a major propaganda victory.

The town name is even used as the title of the Islamic State’s propaganda magazine.

The U.S. special forces contingent recently linked up with Turkish forces in the town of al-Rai, about 20 kilometers from Dabiq, to help with the “slow and deliberate” operation to clear Islamic State from the border region, a defense official told VOA, speaking on the condition of anonymity.

The U.S. ground advisers were approved to join the mission “just a couple of weeks ago” and are “with the Turks now,” according to the defense official.

On Monday, Turkish President Recep Tayyip Erdogan said his military and the Syrian Arab opposition fighters planned to clear a 5,000-square-kilometer buffer zone along their border with Syria.

The Turks also aim to clear Kurdish forces, who are aligned with the U.S. in the fight against Islamic State, from the border region. The U.S. has advised Kurdish YPG fighters battling Islamic State to fall back east of the Euphrates.

Turkish officials also said they planned to support allied Syrian opposition forces in a push south from the Dabiq area to retake the Islamic State stronghold of al-Bab.

A U.S. official told VOA that al-Bab has become the Islamic State’s center for foreign intelligence. Many Islamic State fighters fled there after being forced out of the city of Manbij last month.

The Turkish infantry will not be involved in the ground operation to retake al-Bab and plans to assist the Syrian forces with Turkish aircraft. It is unclear whether U.S. special forces will be on the ground near the city to advise the Syrian opposition, but Colonel John Thomas, a spokesman for U.S. Central Command, said there would “absolutely” be U.S. air support.

“This is largely an air war for the United States, and we’re ready to … help out forces in need,” he said. He added that the U.S. “always has the right of self-defense” to protect any special forces that may be in the area.

A defense official said the U.S. has special operations forces near Manbij, the Mara Line, and other undisclosed locations in Syria.

“They go in and out all of the time,” the official said.