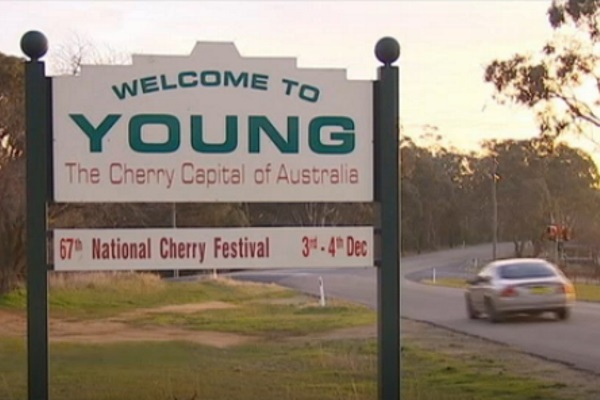 Nestled in the South West Slopes in New South Wales is the sleepy town of Young, the cherry capital of New South Wales – it’s not the first place to spring the mind when you think of Ramadan celebrations but the community of 7000 is growing, and it’s the Muslim community boosting the population.

Abdulghani Albaf moved to the town for a tree-change with his family three months ago and says he hasn’t looked back.

“Living in Sydney you realise that you get to a point where you just don’t have time to do anything,” he said.

The benefits are multiplied during Ramadan if Mr Albaf can spend more time in the local mosque praying. There are five prayer sessions a day and it’s more rewarding to attend the mosque to carry out those prayers.

In Sydney people have to battle the city, the traffic and hectic lifestyle to fit it in. In Young, Mr Albaf has found it a lot easier.

“Praying in a mosque as a Muslim is a lot better,” he said.

“It’s highly recommended. Working in Sydney, living in Sydney, I never had time to do things like that. So obviously now that I’m here, we have a lot more time on our hands.

Mr Albaf’s family is one of around 70 Muslim families who live in the small NSW town. The first family to move there 28 years ago set up a cherry farm and still lives in the community.

The Muslim community continues to contribute to the local economy but it’s expanded from the one cherry farm. There are now 10 businesses in town owned and operated by the newest members of the community.

Ehab Arja is one of the leaders in the community and says they make sure to invest back in to Young so the benefits are widespread.

“As a community, we always only shop locally and use locally as much as we can,” he said.

“Even in our renovations, in our building, everything is used locally – architects, local builders, local plumbers – and that’s the way it is in a country town to support locally, so they support you, you support them.”

As the Muslim community buy and sell properties and businesses the local lawyer in Young, David McCabe, has been a beneficiary of that support.

“They’d go through local real estate agents, then that’s a sale on a property then that person would buy another property, so that kind of encourages the property market in Young to be moving along,” he said.

Nearly three decades on the relationship only seems to be getting stronger.

Mr McCabe says the people in Young have accepted the newcomers with open minds and open arms.

“The feedback has been positive; I’ve never heard a bad word spoken about the Muslims in town, ever, which is fantastic for a country town because you would expect to hear some comments but I’ve never heard any bad comments at all,” he said.

“The traditional country person has moved a long way down the progress chart.

“They’re more accepting now of any kind of nationalities, people with different ideologies, different sexual preferences and things like that.”