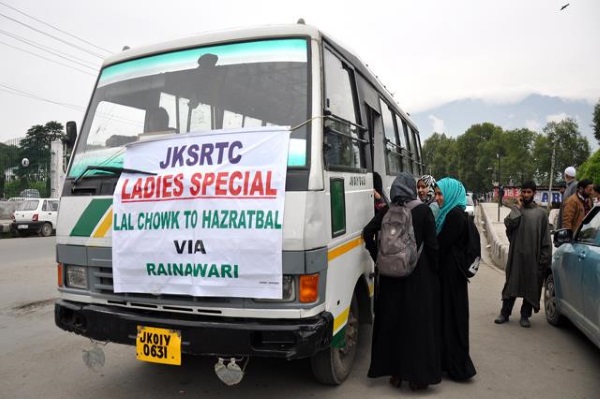 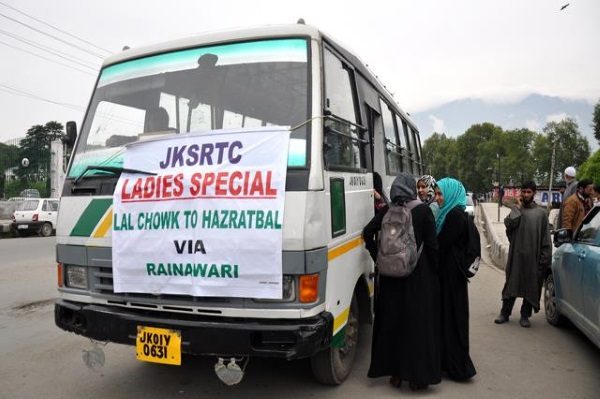 In one of her first decisions after taking over as the first woman chief minister of Indian-administered Kashmir, Mehbooba Mufti launched a bus service exclusively for women. The BBC’s Geeta Pandey goes for a ride on one of them to gauge their popularity.

It’s 8:45 in the morning and the Srinagar Road Transport Corporation bus stand in the Lal Chowk area is deserted, except for a few transport department workers.

This is the complex from where Srinagar’s new “ladies special” bus service sets off every morning at 9am for Kashmir University.

I am joined by former university student Umaira Hassan who, until a few months ago, used to travel daily to the university to study journalism there.

Like me, she’s a first-time traveller on this bus service.

“The moment I heard about this bus service, I was thrilled. It was much needed in our male-dominated society,” Ms Hassan says, as the bus begins its journey.

We are the only passengers to begin with, but within minutes of hitting the road, the bus makes its first stop- and a group of young college students get on.

Soon, the bus begins filling up with happy smiling faces.

The women’s bus service was launched on 19 April with a fleet of five buses that make two round trips everyday.

When a male opposition legislator criticised the service, Chief Minister Mufti retorted that it was difficult for a man to “comprehend what women went through” while travelling in passenger buses.

During our journey to the university, I ask Ms Hassan and some of the other passengers about their daily travel experiences and the horror stories are similar to what one hears from women across India.

“Travelling on a regular bus is like going to war,” Ms Hassan says. “I have to steel myself, fight my way in, push and shove others to make some space for myself.”

She recounts one particularly unpleasant experience when a man kept touching her on the knee.

“At first, I thought it was because the bus was quite crowded, but then I realised that he was doing it intentionally. I was upset, but when I confronted him, instead of moving back, he moved even closer.

“And then he started to write his phone number on his palm. I’m not someone to take things lying down, so I pushed him back, he stumbled, but then moved away from me,” she says.

Ms Hassan says a recent survey by a local group revealed that “if there were 10 women on a bus, nine got harassed” and that all her friends have stories of male passengers touching and groping them.

And in a narrative that would be all too familiar to women across India – and in many other parts of the world too – women in Kashmir said if someone misbehaved with them and they protested, they themselves were often blamed for inviting trouble.

“Other passengers look at you as if you’re the one at fault. Everyone blames you, everyone says it must be the woman’s fault,” says university student Sadia, who only goes by one name.

“We have two options – either to keep quiet or fight. And if you choose to fight, you have to be prepared for it to escalate,” she adds.

Ms Hassan says a male passenger once told her to “travel in your car, this bus is for everyone, it’s not an exclusive service for you” after she protested because he stood really close to her.

“Women have to put up with this sort of bad behaviour regularly. I appreciate the chief minister for thinking of this bus service. It seems finally our prayers have been answered,” she says.

In the first 20 minutes of our journey, it becomes obvious that this service is hugely popular – the bus is now full, there are nearly 50 passengers on it, all the seats are taken and many women are standing in the aisle.

Most of the passengers are university students while some are teachers and they all say that they’ve been travelling on this bus regularly since the service started.

Student Haifa Ali says “it’s great fun to see men waiting at the bus stop while our bus just drives past them”.

Rifat Mir, a government health official, says the bus service has made her life “very easy”.

“I take it every day to and from my workplace,” she says. “It’s clean, it’s always on time, there’s no jostling and it’s very safe.”

Mrs Mir and other passengers now want the government to start similar bus services on all city routes.

Transport department official Mushtaq Ahmed Chanda told the BBC he had received about 30 emails, mostly from female students, asking him to expand the service.

“We will be starting two more women’s-only buses within a month,” he says, but adds that service is running at a loss and unless the government helps with the funding, they may not be able to sustain it for long.

That would be a massive let down for passengers like Ms Hassan.

“This is the first time I’ve travelled on this bus, but I’ve enjoyed this journey immensely. It doesn’t feel like public transport.

“I appeal to the government to introduce these women’s buses on all routes across the city. This will give women the confidence to step out of their homes and take on the world,” she says.