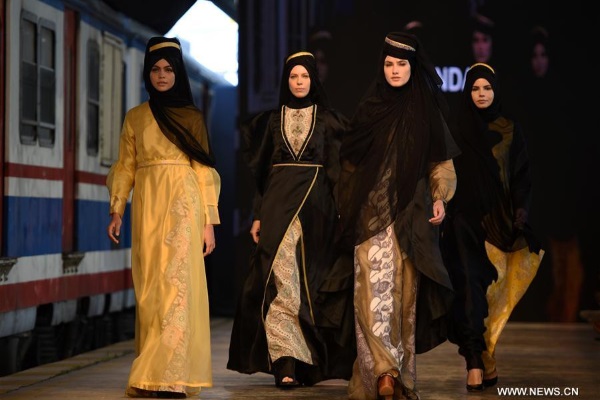 Istanbul played host to Modest Fashion Week May 13-14 at the Haydarpasa railway station. The event was the first of its kind in Turkey and was organized by Modanisa.com, an online retailer of Muslim fashion, in collaboration with the Islamic Fashion and Design Council. The program included fashion shows, panels and workshops on a variety of topics including marketing, social media, branding and gastronomy. Among the guests were fashion blogger Dina Tokio; Haneefah Adam, creator of Hijarbie; Mariah Idrissi, the first hijab-wearing model for global modest brands; Kuwaiti influencer Fatema Al Awadhi; CEO of Haute Hijab Melanie Elturk; and many others. The organizers anticipated guests from 25 countries.

Various international media covered the event from the perspective of a burgeoning industry within the framework of Islamic consumerism and through the prism of cultural wars between secularists and religious conservatives in Turkey. While these approaches have some validity — for example, the latest Global Islamic Economy report suggests that worldwide spending on Muslim clothing is projected to grow to $327 billion by 2020, up from $230 billion in 2014 — few noted the strong and angry backlash among hardcore religious believers in Turkey’s conservative camp.

The conservatives’ ire against the organizers of Modest Fashion Week is but the latest manifestation of ongoing disputes about veiling and hijabi fashion they consider incompatible with the tenets of Islam. As academics Banu Gokariksel and Anna Seco wrote, “Veiling-fashion remains controversial because it combines two systems that are seemingly incompatible: veiling, with its powerful set of religious, cultural and political references, and fashion, an unmoored system of self-referential change associated with capitalism, modernity and a particular kind of consumer subject.” The reactions of the conservative, so-called anti-capitalist Muslims to Modest Fashion Week reflected this dichotomy.

On the closing day of the event, a group of protesters from the Free Thought and Education Rights Association, Ozgur-Der, gathered in front of the Haydarpasa station to express their irritation. “It is worth noting that the reference point of the headscarf, which is seen as a simple commodity or item for advertising by some people, is in fact chastity and identity,” said Emine Nur Cakir, a spokesperson for the group. “The headscarf, which symbolizes a stance, a lifestyle, an Islamic identity, is being sacrificed in the name of fashion — a product of capitalism, a system equivalent to the ‘jahiliyyah’ [pre-Islamic age of ignorance] lifestyle.”

The night before the event got underway, a digital tsunami of indignation and fury swept through Twitter with the hashtag #tesettureihanet (“betrayal to covering practice”). Islamist pundit and journalist Yusuf Kaplan wrote, “We won the headscarf battle, but we lost the practice.” His comment was retweeted more than 2,600 times and liked by 3,400 users. Other examples of tweets expressing outrage included “Veiling is not fashion, it is God’s order” and “Modest Fashion Week is making veil a tool of capitalism!”

The Twitter frenzy continued into the night, with the organizers of Modest Fashion Week being proclaimed “betrayers of the faith,” while some pleaded for more liberal attitudes (e.g., “Let people dress the way they want. Why do you care about women’s hair? If she wants to show it she will, or won’t”). One person tweeted, “Veil is not unique only to ladies my friend. Man’s veil is his closed eye.” Another tweeted, “There cannot be veiling fashion. Because worshipping practices cannot be the subject of fashion.”

One user posted an interesting tweet that appeared to sum up the attitude of many likeminded conservatives. Under the statement “Unfortunately the state of the [fallen] Muslim girls nowadays” is an accompanying photo of three girls wearing headscarves and commenting on a girl passing by without a headscarf. One snarks about her, “The infidel’s head is not covered. I loathe seeing them. Look at her. …! Unfortunate fool. …” One of her girlfriends comments, “Don’t say that buddy. Pray. Maybe she will cover herself too. …”

The user appears to have posted the cartoon because of its criticism of the girls in headscarves, as they are wearing heavy makeup, high heels, tight-fitting clothes and big earrings. They are more dressed up than the girl passing by with her hair exposed but her arms and legs covered. The user also said, “Yet each imagined being a Fatima, Hagar,” referring to prominent female role models in Islam.

Fashion media lecturer Elif Kavakci, a modest wear fashion designer of Turkish origin pursuing a doctoral degree in fashion, found the critics’ arguments lacking. She told Al-Monitor that the hijab’s aesthetic has changed over time, place and cultures. “No one I know goes to work in pajamas and sleeps in a suit. … It is often people who define themselves as being anti-fashion who are indeed participants in the sector,” she said.

Kavakci indicated her support for organizations and designers involved in the industry for a long time, including the Dubai-based Islamic Fashion Design Council. “While there are other ways of selling modest apparel without doing fashion shows, the show appeared to portray a modest aesthetic, not a sexy female model on the runway,” said Kavakci. “These women have been in the industry and have made it their sole purpose to provide a service to Muslim women in a world where fashion is dictated by mainstream brands and designers.”

So, while many conservatives and progressive seculars hail the recent appearance of a fashionable Muslim woman who wants to express her tastes and social status through style, other conservatives and anti-capitalist Muslims lament what they see as giving in to capitalism, the emptying of religion and the fake religiosity of the new Islamic bourgeoisie. One way or another, as Gokariksel and Seco observed, “The rise of veiling-fashion as a transnational phenomenon positions women and women’s bodies at the center of political debates and struggles surrounding what it means to be ‘modern’ and Muslim today.”

As the Islamic identity of practitioners continues to evolve with time, so will the debate on modest fashion. The interest and development of the industry seems unstoppable at this point, however, because too many Muslim women enjoy the way these clothes make them feel. Since no side can prevail in the battle over who is the “right” kind of Muslim in modern times, the best advice might be to live according to the tenets one personally deems correct and let others do the same while accepting the existence of differing practices, clothing included.