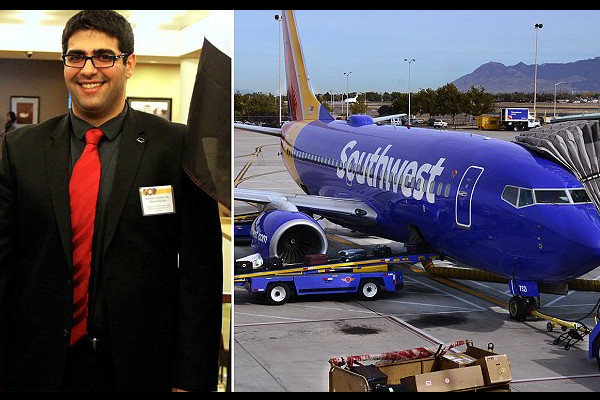 The removal of a University of California Berkeley student from a Southwest Airlines flight after his speaking Arabic is the latest in a string of similar cases.

Muslims and Arabic speakers in the US are seeing a rise in anti-Muslim fear and rhetoric in America’s presidential campaign, concurrent with terrorist attacks carried out by Islamic extremists.

Khairuldeen Makhzoomi, a college senior and who came to the United States as an Iraqi refugee, said he was unfairly removed from an April 9 flight from Los Angeles to Oakland after a woman sitting nearby reported him to flight attendants. An Arabic-speaking member of the staff then escorted him from the plane.

Mr. Makhzoomi, whose flight took off while he was being questioned, told the New York Times he had been talking excitedly to his uncle by phone after attending a speech by UN Secretary General Ban Ki Moon. He said that his use of the term “inshallah” (God willing) and his mention of a question he asked Mr. Ban about the Islamic State could have raised suspicion.

Makhzoomi said he told the Southwest employee, “This is what Islamophobia got this country into.” Makhzoomi said that angered the employee, and that he was then told he could not get back on the plane.

Southwest Airlines said it has not received a formal complaint from Makhzoomi and that it could not comment further without talking to him first. But the airline issued a statement to the Washington Post, which read in part:

Crew made the decision to investigate a passenger report of potentially threatening comments overheard onboard our aircraft…While local law enforcement followed up with that passenger in our gate area, the flight departed.

“We regret any less than positive experience a Customer has on Southwest… Safety is our primary focus, and our Employees are trained to make decisions to safeguard the security of our Crews and Customers on every flight. We would not remove a passenger from a flight without a collaborative decision rooted in established procedures… Southwest neither condones nor tolerates discrimination of any kind.”

The incident highlights an apparent rise of Islamophobia across the United States: Republican politicians at all levels of government have suggested legislation that would limit the civil or religious liberties of Muslims, while public schools and colleges have seen a rise in slurs or discrimination against Muslim students. Many individuals and mosques have come under attack, as well.

Zahra Billoo, the executive director of the San Francisco Bay Area office of the Council on American-Islamic Relations, told the New York Times that Muslims had been pulled off flights at least six times this year. She pointed out that Southwest Airlines had another Muslim passenger removed from a flight in Chicago last week.

“We are concerned that Muslims are facing more and more scrutiny and baseless harassment when they are attempting to travel,” Ms. Billoo said.

Such instances have increased at the same time as Republican rhetoric has encouraged suspicion of Muslims, fueled by concerns after recent terrorist attacks in Paris, San Bernardino, Calif., and Brussels.

At American schools and colleges there has been an increasing number of reports of discrimination from the administrative to the student level.

One case that received international attention was that of 14-year-old Ahmed Mohamed, a teen and aspiring engineer who was arrested after he brought a clock to his school in Texas.

“I built a clock to impress my teacher but when I showed it to her, she thought it was a threat to her,” CNN reported Ahmed as saying last year. “It was really sad that she took the wrong impression of it.”

Nour, a college student and Syrian refugee, told Mother Jones, a progressive news site, that a rise in anti-Islamic sentiment on college campuses after the Paris attacks motivated her to become a student activist.

“There is a growing tension I feel at school, after Paris, especially toward two girls from Yemen who wear headscarves over long, black dresses,” she said. “Students often ask them, ‘Why do you wear this? Can you take it off? I want to see your hair!’ I want to help them feel safer and more included at school.”

In February, Think Progress published a map showing at least 65 anti-Islamic incidents across America, including “shootings, personal assaults, harassment, and attacks on their houses of worship.”

Makhzoomi, the college senior removed from the flight, was able to get another flight with Delta after the FBI determined “no further action was necessary,” and arrived home eight hours after his scheduled arrival. He told the New York Times it wasn’t the only instance of discrimination he and his family have faced.

“My family and I have been through a lot, and this is just another one of the experiences I have had,” he said. “Human dignity is the most valuable thing in the world, not money. If they apologized, maybe it would teach them to treat people equally.”