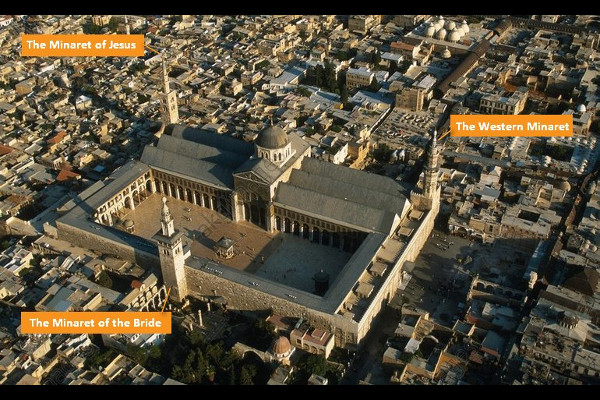 The Prophet Muhammad (peace be upon him) said,

“…then Allah will send forth the Messiah, son of Mary. He will descend at the white minaret in eastern Damascus, flanked in saffron garbs, with his hands upon the wings of a pair of angels…” (Muslim)

Muslims believe that Jesus will return at the end of time and will clear all the confusion prevailing in the world regarding his life and mission.

No historical figure has been the subject of as much controversy as Jesus of Nazareth. He is worshipped as the only-begotten Son of God, the Messiah, the Savior, and as God Himself by the Christians of the world.

The Jews believe that he falsely claimed to be the expected Messiah of the Jews.

The rationalists claim that Jesus Christ never existed. According to them, Jesus was a myth, a “fabricated hero”.

Of the dozens of Christian denominations who believe in the second coming of Jesus, the position of the Christian Fundamentalist Churches (or the Evangelicals) is unique.

Their belief system owes a great deal to the Scofield Reference Bible, which was the work of Cyrus Ingerson Scofield (1843-1921), a pastor of the Dallas First Congregational Church. By inserting his own interpretations of particular verses into his Bible, he was able to provide a new narrative to an old story:

Scofield told his audience that the world would end in a final world conflagration called the Armageddon. But, he said, born-again Christians should welcome such a catastrophe because once the final battle began, Christ will lift them up into the clouds.

Thus to the Evangelicals, the most attractive part of the story is that “all true Christians” (meaning the same band of fundamentalist Christians) will be bodily lifted up to heaven during a miraculous event called “the Rapture”, so that they will be spared of the “tribulations” and the trauma to which the non-Christians (who include all other Christians like the Roman Catholics and most Protestant groups) are exposed.

The “dispensationalists” (one group among the Evangelicals) believe in the doctrine of imminent “Rapture”. This, according to them, means that Jesus will come secretly in the clouds and raise dead-and-buried born-again Christians from the dead.

In contrast to the above beliefs, the Muslims hold the following beliefs about the second coming of Jesus:

– Jesus was a real person and a blessed prophet of God who lived some two thousand years ago, preaching to his people, the Israelites.

-Jesus was the Messiah (Masih) prophesied by the earlier Israelite prophets.

– The return of Jesus is a sign of the end times.

– Jesus will clear all the confusion prevailing in the world regarding his life and mission.

– Jesus will follow the law of God as perfected by the final prophet, Prophet Muhammad ( peace be upon him).

About the so-called “crucifixion” of Jesus, God in the Quran says what means:

[And (as for) their saying, “We killed the Messiah, Isa son of Maryam, Messenger of Allah”, …They did not kill him and they did not crucify him, but it was made to seem so to them. Those who argue about him are in doubt about it. They have no real knowledge of it, just conjecture. But they certainly did not kill him. Allah raised him up to Himself. Allah is Almighty, All-Wise.] (An-Nisaa’ 4:157-158)

A close look at the above verses point to the following:

The Romans and the Jews did not kill Jesus; they did not crucify him; but it appeared so. The question is: what happened to Jesus then?

And the answer, according to Islam, is: “God raised him up to Himself.”

Considering the context of the event described, it does not seem reasonable to believe that “raising him up” meant, (as some would argue) elevating his spiritual status before God. We should understand that God saved Jesus from an accursed death on the cross (as the Gospels later alleged).

Moreover, the belief in Jesus’ crucifixion stems from the Islamically unacceptable concept of the inherited sin of mankind. And the concept of blood sacrifice by an innocent Son of God to save sinful man is abhorrent to reason, justice, and the very idea of an All-Merciful God.

And for this reason, the “atoning crucifixion” of Jesus could never have happened. In other words, the truth is what the Quran says that Jesus was neither killed nor crucified.

The Quran and the sayings of Prophet Muhammad support the belief that Jesus will certainly return:

Prophet Muhammad (peace be upon him) said,

By the One in Whose hand is my soul! The son of Mary is about to come back as a just ruler who will break the cross, kill the swine, and cancel the tribute, and money will be so great in amount that no one will be in need of it, and one act of prostration will be more lovable to a person than the whole world and everything in it. (Al-Bukhari)

The foregoing clearly shows that Jesus will return to the earth. But as Islam has been made perfect by God through Prophet Muhammad, Jesus will not make any addition or subtraction to the teachings of Islam. Rather, he will follow the Shariah (Islamic law) of Muhammad.

Muslims do not know when Jesus will come, but they surely believe he will come.