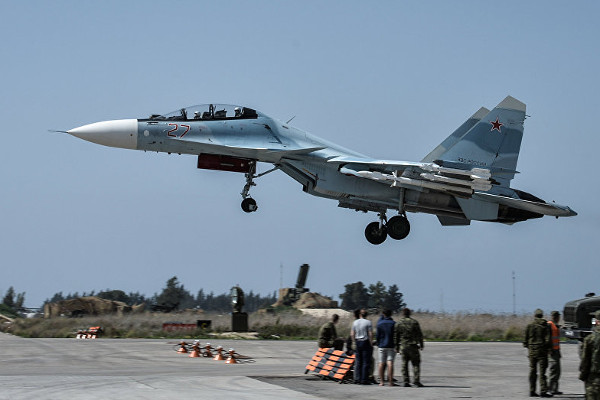 Vladimir Putin surprised his country and the world on March 14 by ordering the start of a partial withdrawal of Russian forces from Syria, less than six months after the beginning of an air campaign that followed a swift and secretive buildup on the ground. What are the motives and messages behind the announcement?

A Signal To Assad

Coming on the first day of new UN-mediated talks on ending the five-year-old war in Syria, a key goal of the start of a pullout may be to make clear to President Bashar al-Assad that it is time to negotiate — and that while Russia was willing to come to his aid and turn the war’s tide when his back was to the wall, he will not have Moscow’s support for the military solution he spoke of last month when he vowed to retake all of Syria.

That pledge — which Assad delivered hours before Russia, the United States, and other powers reached agreement on a cessation of hostilities in Syria — seemed to irk Moscow. Russian analysts have emphasized that the Kremlin cannot allow Assad to call the shots.

The caveat here — a big one — is that there’s no way of knowing how closely Putin and Assad are huddling on plans for Syria’s future. Despite Assad’s claim that the withdrawal was the product of “complete coordination” between Moscow and Damascus, the answer could conceivably lie anywhere between little or no joint planning to a detailed, long-term blueprint for military action and diplomacy — including the talks in Geneva.

A European diplomat told Reuters that the Russian move “has the potential to put a lot of pressure on Assad and the timing fits that,” but added, “However, I say potentially because we’ve seen before with Russia that what’s promised isn’t always what happens.”

In any case, on the surface Putin seems to have succeeded in sending a warning to Assad without retreating an inch from Russia’s insistence that his exit from power — whether at the beginning of a transitional period, at the end, or at any other time — cannot be a precondition of the negotiations. In case that was lost on anyone, Kremlin spokesman Dmitry Peskov stressed that when Putin phoned Assad to inform him of the decision, the two did not discuss the Syrian president’s future.

A Message To The West

In addition to the start of a withdrawal of the “main part of our military contingent” in Syria, Putin ordered an intensification of Russia’s diplomatic efforts to end the war there. In Putin’s mind, presumably, the West’s takeaway should be that Russia is ready to give its all to the push for peace in Geneva.

On March 15, Peskov said that “the main task today is to comprehensively assist a peace settlement.”

Whether the United States and Europe will believe that is another question. Many in the West will reserve judgment, given Russia’s penchant for using past negotiations — not only on the war in Syria, but also on the conflict in Ukraine — to play for time and alter the military “facts on the ground” in its favor.

While Putin’s announcement seemed to take the United States by surprise, the Kremlin’s assiduousness in asserting that it had nothing to do with Assad’s fate was not lost on Washington. Following a telephone conversation with Putin after his announcement, the White House said that Obama “underscored that a political transition is required to end the violence in Syria.”

But the announcement that a withdrawal is under way potentially deprives Assad’s opponents of a fat target for criticism, considering that Russia’s air strikes are estimated to have killed some 1,700 civilians in Syria. It also gives Russia ammunition to blame others — the Syrian opposition, its regional backers, and the West — if the negotiations fail.

There was no banner and no shipboard celebration, but Putin’s televised statement that “the task put before the Defense Ministry and Russia’s armed forces has, on the whole, been fulfilled” echoed of former U.S. President George W. Bush’s “mission accomplished” moment in Iraq.

And while Western leaders have stressed that few of Russia’s bombs have targeted Islamic State militants, Putin’s boast that Russia helped Syrian forces “achieve a fundamental turnaround in the fight against international terrorism” may have found more sympathetic ears at home. Russia’s state TV audience is also being fed the more contentious claim that they did so with no collateral damage.

Not everybody in Russia is convinced. In a blog post on the website of Ekho Moskvy radio, journalist Arkady Babchenko contrasted countries whose decisions on military action play out in public over weeks or months with Russia, where “nothing was portended in the morning…and in the evening it was suddenly, ‘Honey, we won the war in Syria!'”

But Putin may be satisfied that he can tell Russians he has avoided a quagmire, improved Moscow’s position in the Middle East, and boosted its clout worldwide.

Putin has said the costs of Russia’s military operations in Syria are manageable. But even if you take that claim at face value, cutting those outlays won’t hurt his image at a time when persistent economic problems are hitting many Russians hard.

Russia’s economic woes stem largely from the collapse in world prices for oil, its chief export, but the sanctions imposed by the United States, the European Union, and other countries over Moscow’s interference in Ukraine have also had an effect — along with the restrictions Putin slapped on many Western food imports as a retaliatory measure.

Russia denies any link between its actions in Ukraine and Syria, and Western countries including the United States say there can be no quid-pro-quo deals with the Kremlin.

But Putin may hope that a partial pullout from Syria will make Russia look more like part of the solution than part of the problem, and nudge the EU — where there are already cracks in the resolve to continue punishing Russia for its seizure of Crimea and support for separatists in eastern Ukraine — to lift sanctions that come up for renewal in July. Italy and Hungary said on March 14 that there could be no automatic extension of the sanctions.

Putin may also believe that he has increased his chances of achieving what is widely perceived as a major goal for Russia — a seat beside the United States in working out global and regional problems, but from a stronger position now that it has shown it will use force when it sees fit.

The headlines have screamed “withdrawal,” but Russia is not planning a full pullout.

Putin also said forces would remain at the Mediterranean seaport of Tartus, which Russia’s navy has used since long before the war, and at the Hmeimim air base in Latakia Province. Russia will keep about 1,000 military personnel at the two bases, a senior lawmaker said on March 15.

With the outcome of the negotiations in Geneva, the fate of Assad, and even the future territorial integrity of Syria still hard to predict, the bases could give Russia a substantial military presence in a key part of the volatile country for years to come.