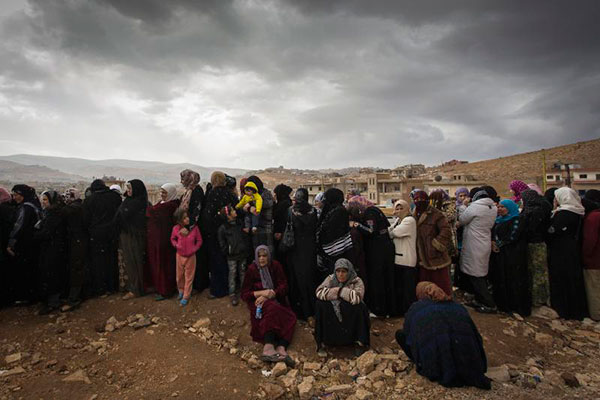 Today, war refugees have become headlines onto themselves. Whether referred to as migrants or asylum seekers by a well-thinking media complex, the semantics of this new crisis nevertheless betrays a very globalist agenda – yet more engineering, yet more manipulation.

With war raging on in the Middle East, millions of people were forced to flee before the advances of terror. Trapped in a conflict which was not of their making, and hunted by armies which have sought only their enslavement and/or annihilation, communities have chosen exile over death, chased out of their lands by the brutality of war. In the face of such human tragedy, Europe opened its borders, inviting in, those who lost everything … or so we were told.

It is this ‘humanitarian’ narrative EU officials have volunteered to both their constituents and the media – this idea that Western nations hold a duty of care and protection over the millions displaced by war.

Indeed, Western powers are responsible. Actually no … their role far exceeds the responsibility since the Mid-East has burnt under their fire. Let us remember which powers in fact engineered and purposely exported destabilization to the MENA over the past decade. From Iraq, to Syria, Libya and Yemen, military pyres have lit up many skies, engulfing all in their wake.

I would argue that Western powers stand guilty of crimes against humanity; responsibility is not strong enough of a word to define what in fact they have inflicted onto several continents.

How many campaigns and interventions will Western capitals have to promote, sell, and invent for the public to recognize that WAR is indeed the driving ambition behind every, and all political agendas? Left, right or centre, most politicians have played to the same tune, only with a different beat.

Europe has opened itself up to human tragedy so that globalists could have at it. The real trick here would be to define this elusive “it”. What is it that the powers that be want with Europe? And more importantly how are refugees fitting in?

I personally refuse to believe that this “refugee crisis” we are seeing play out on our screens can be reduced to simple fear-mongering against Muslims. Yes, Muslims have become Europe’s appointed scapegoats for their faith was made to rhyme with terror, but racism and xenophobia are hardly more than the foot-soldiers of an agenda which speaks of global control, and global re-engineering.

Beyond the human trafficking, the drug connections and the despicable sexual exploitation lies a grand exploitation scheme, where society as a whole is being re-arranged, re-aligned and re-programmed to fit within one system of socio-political and economic governance – notwithstanding the imposition of secular atheism as the new supra-state religion.

A bit much you say? It sounds too outlandish or conspiracy-like for your taste buds you argue?

Consider this: EU officials, Angela Merkel right in the lead, made absolutely sure that war refugees would find their way to Europe’s green landscapes. Actually experts such as Scott Bennett, a former US special op. intelligence officer have long established that refugees were “made to come to Europe” through a clever game of geographical bottle-necking. Ever wondered why Europe’s staunchest allies in the ME refused to open up their borders to offer Jordan and Turkey some relief? Ever wondered why the likes of Saudi Arabia or Egypt for example were not called upon to share in the refugee load given they are geographically connected to this crisis, and could have socially absorbed newcomers since they all share ethno-religious markers?

According to a report by Amnesty International, the six countries of the Gulf Cooperation Council offered zero formal resettlement slots to Syrians by the end of 2014.

“The missing linkage in this tragic drama is the role of Arab countries, specifically the Gulf countries,” Fadi al-Qadi, a regional human rights expert in Jordan told Time in an interview last September. “These states have invested money, supported political parties and factions, funded with guns, weapons et cetera, and engaged in a larger political discourse around the crisis,” he added.

Europe has been set up. There is no way around it. The real questions we ought to ask is why, and to fit whose agenda. I personally believe globalization to be the culprit. Europe I would argue has been transformed into a giant social Petri dish.
Globalists are re-arranging society, hoping that the overlapping of various ethnicities, traditions and faiths will justify for greater state oversight: i.e. social diktat. We are quite cleverly being programmed for a social, military and economic takeover.

British Prime Minister David Cameron’s recent comments on Muslim women’s alleged “submissiveness” and their role in driving radicalization forward plays into this narrative that all our identities need blending into one “harmonious” lump.

Let’s be clear here, the powers that are looking onto us as if we were corporate assets and products– and we all know how much corporations love individualism.

If we agree to step out of the xenophobic bubble officials stuck us into, we will realize that this new migration wave will actually serve capitalists’ agendas.  No mistakes were made; there was no lack of foresight, only manipulation.

As migrant-related violence will breed social outrage and prompt calls for actions on the part of our governments, state institutions will be able to manifest those civil liberties, thinning they would not have otherwise been able to roll out. And then of course there is the little matter of cheap labor and human exploitation: those made destitute will have little say when it comes to their future working conditions … further eroding at those rights we all take for granting.

I’ll let you chew on that for a while.

Catherine Shakdam is a political analyst, writer and commentator for the Middle East with a special focus on radical movements and Yemen. A regular pundit on RT and other networks her work has appeared in major publications: MintPress, the Foreign Policy Journal, Mehr News and many others.Director of Programs at the Shafaqna Institute for Middle Eastern Studies, Catherine is also the co-founder of Veritas Consulting. She is the author of Arabia’s Rising – Under The Banner Of The First Imam