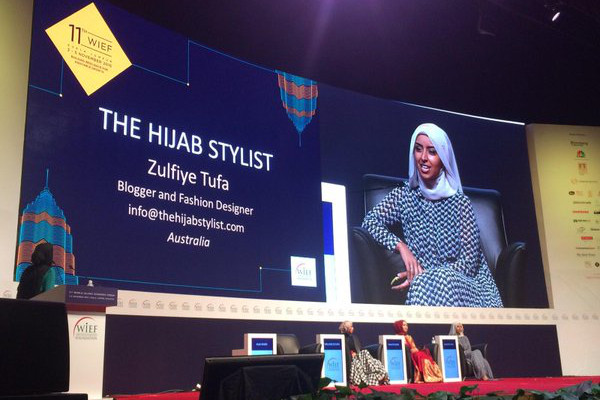 There have been high-fashion collections inspired by the Middle East and ready-to-wear lines featuring hijabs and abayas. But fashion-forward clothing for Muslim women by Muslim women has been missing from the industry — until now.

Australia’s Zulfiye Tufa, of the blog “The Hijab Stylist,” is changing that and bringing modest clothing to the forefront of the fashion conversation.

The 26-year-old pharmacist began blogging when she saw a void in the fashion industry for chic modest clothing. She provided styling tips for other women and focused on “interpreting fashion through the lens of faith,” as she told Melbourne’s The Herald Sun.

“I’m not making something no one’s seen before, I am trying to fix a problem,”Tufa told i-D. “[By problem] I mean modifying what is already in fashion, or ‘hijab-ifying’ that to meet the guidelines or criteria of what women who wear headscarves, or dress modestly can wear.”

Over time, “The Hijab Stylist” gained a social media following — both from Muslim women and others who were interested in what she was doing. She now boasts 42,000 followers on her Instagram account, where she regularly shares “hijab-ified” street style inspiration and discusses her experience as a Muslim woman.

“Mainstream fashion doesn’t take modesty into account, and if it does, it’s only a trend that comes and goes,” she said to i-D. “It’s about how to be creative with your style so you don’t look like a piece of fabric walking around.”

Though Tufa had experimented with designing clothing since high school, she used her social media success to further launch her designs, which include maxi skirts and capes. Tufa told i-D she draws inspiration from street style and outfits she sees on social media. She then considers how to translate what’s already trending in the fashion industry to something modest that she and other Muslim women can stylishly wear.

And she’s recently taken her passion to a new level: opening up Mod Markit, a secondhand clothing website targeting “modest fashionistas.” Because Tufa belongs to the demographic she’s catering to, she understands the nuanced struggles fashion-conscious Muslim women face on a daily basis. This first-hand experience informed the creation of Mod Markit — a site Tufa said she hopes will stop the forced choice of too-sexy gown vs. “grandma dress.”

“One of the reasons I started Mod Markit was to put money and power back into the hands of the women who make and wear these clothes,” she said to i-D. “When I see big fashion companies catering to Muslims I think it’s fantastic, but I also know they’re just doing it for financial reasons — modest fashion is one of the largest growing sectors of the industry. Personally I want the people who dress modestly to be the ones benefitting from modest fashion.”

Tufa is one of many influential Muslims to make a name for herself in the fashion industry. Summer Albarcha is a modest fashion blogger from St. Louis with more than 200,000 Instagram followers, and Uniqlo paired with fashion designer and blogger Hana Tajima to create a line of colorful hijabs last July.