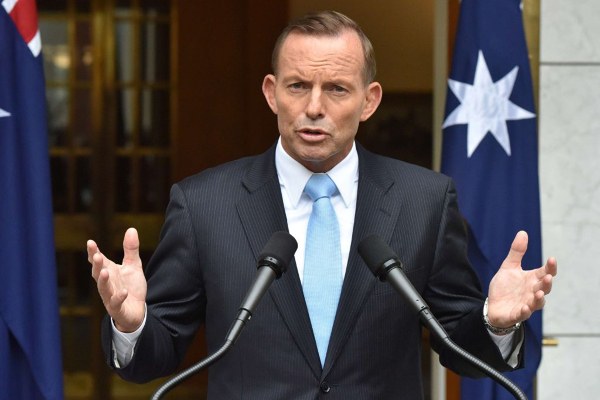 Former Prime Minister Tony Abbott and his controversial Chief of Staff Peta Credlin manipulated public opinion in relation to national security and the terror threat “on a mass scale” in a desperate effort to stay in power, according to a new book published this week.

Credlin & Co: How the Abbott Government Destroyed Itself, written by respected senior journalist Aaron Patrick, a deputy editor at The Australian Financial Review, explores in detail the dysfunction at the heart of the Abbott government.

Throughout 2015, Mr Abbott’s office concentrated on the issue of terrorism, which the Prime Minister and his advisers saw as the best way of defeating Bill Shorten and the Labor Opposition, as well as silencing the many critics within his own party.

But as Mr Patrick writes: “Abbott and Credlin believed the threat of terrorism from Islamic fundamentalists was one of the government’s most potent political assets. It also illustrated the weakness at the heart of the government. After the failure of its first budget, Abbott mostly dodged issues of substance and concentrated on crowd-pleasing gestures aimed at middle Australia. Supported by backroom operatives . . . Abbott and Credlin stoked the public’s fear of terrorism on a weekly and sometimes daily basis. They exploited the media’s natural respect for the prime minister and national security policy.”

As one example, nine months after 18-year-old Numan Haider was shot dead outside the Endeavour Hills police station in Melbourne during an incident with a police officer, Mr Abbott organised a press event at the station to publicly thank the officers involved.

It was not just an historically inaccurate claim, as Mr Patrick notes, “it was a rhetorical over-reach typical of Abbott’s personal war on terror”.

“Haider was a troubled adolescent from an Afghan family, a young man attracted to fundamentalism because of his alienation from Australian society. He was a danger to himself and others,” Mr Patrick writes.

Describing Haider as Australia’s first terrorist magnified the importance of his death, while seeking to turn the tragedy of a teenager’s suicidal actions into a photo opportunity, showed zero understanding of the forces driving Australian Muslim youth into the arms of Islamic State.

Terror was good for ratings. As Mr Patrick observes: “Mainstream media outlets, desperate to staunch the loss of their audiences to the internet, were willingly used. The Daily Telegraph and the Herald Sun, Australia’s two biggest daily newspapers, ran front-page stories about terrorism dozens of times. The commercial television news bulletins mentioned terrorism almost every night.”

Mr Patrick told The New Daily that for a time the strategy worked.

“It was quite effective,” he said. “The Prime Minister had the News Corp tabloids and the TV networks with him.

“There are a few people out there who said this was going too far, but overall most people were too nervous to take on Abbott over terrorism because it was a life and death issue.

“Credlin was his primary political adviser and he would not have done it without her agreement, which I am sure he got. They were constantly looking for ways to discuss the terrorism threat. They created opportunities for media coverage that would highlight their policies on terrorism.

“Politics is a tough game. I would not go so far as to say it was immoral. As a political strategy it was understandable as they were so far behind in the polls. The problem was the government wasn’t achieving enough in the economy. It was on the nose because of how it operated, but if it had been able to introduce important policies that would have made Australia a better place it would have survived. It was a matter of substance.”

In a government run by a remote Prime Minister and an intimidating Chief of Staff who had helped create a climate of fear across the government, the few Liberal MPs brave enough to express the view that hyping the terrorism threat could backfire were drowned out.

If the fickle public mood had shifted, Mr Patrick says, “as a weakening economy began to bite”, Australians might have realised “the government was saying, ‘Look over there!’ while their houses were on fire”.