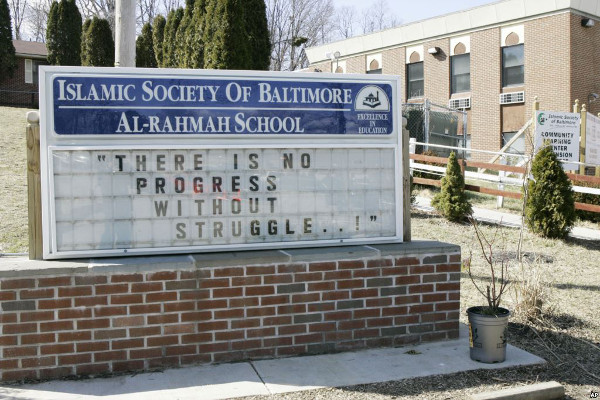 By: Michelle Boorstein and Juliet Eilperin

President Obama will make the first visit during his presidency to a U.S. mosque, the White House announced Saturday, part of the administration’s push to promote religious tolerance at a time when rhetoric linking Islam with terrorism is growing.

On Wednesday, the president will visit the Islamic Society of Baltimore, a sprawling community center in the city’s western suburbs that serves thousands of people with a place of worship, a housing complex and schools,according to its website. It is one of the Mid-Atlantic region’s largest Muslim centers and describes itself as aspiring “to be the anchor of a growing Muslim community with diverse backgrounds, democratically governed, relating to one another with inclusiveness and tolerance, and interacting with neighbors in an Islamic exemplary manner.”

The president is making the visit “to celebrate the contributions Muslim Americans make to our nation and reaffirm the importance of religious freedom to our way of life,”  a White House official wrote in an email Saturday. “The President believes that one of our nation’s greatest strengths is our rich diversity and the very idea that Americans of different faiths and backgrounds can thrive together – that we’re all part of the same American family. As the President has said, Muslim Americans are our friends, and neighbors; our co-workers, and sports heroes – and our men and women in uniform defending our country.”

At the Islamic Society, the president will hold a roundtable discussion with community members, the official said.

The visit will be part of the tightrope-walking Obama has done during his presidency around Islam.

For years, Muslim Americans have lobbied him to visit a mosque, citing Islamophobia. At the same time, a segment of Obama’s critics have said since he took office that he is a Muslim pretending to be Christian, and that he plays down the religious aspect of Muslim extremism. Recent polls show that 29 percent of Americans and nearly 45 percent of Republicans think he is a Muslim. The visit comes in the last year of his presidency.

The possibility of a mosque visit came up again a month ago, when several prominent Muslim Americans met with senior White House officials to discuss concerns about rising hostility toward people of their faith. During that session _ which was attended by White House senior adviser Valerie Jarrett, Domestic Policy Council director Cecilia Muñoz and deputy national security adviser Ben Rhodes — the Islamic leaders asked for Obama to visit a mosque, ideally with former president George W. Bush.

Presidents rarely visit houses of worship, aside from when they have attended church for their own religious practices. Obama regularly attends religious services on key holidays. In May, he visited a synagogue for the first time as president.

In 2001, Bush visited the Islamic Cultural Center of Washington, six days after the 9/11 terrorist attacks, where he declared, “Islam is peace,” and “the face of terror is not the true faith of Islam.”

While Islamophobia has been an issue for some time, particularly as the Islamic State has gained strength in Iraq and Syria, it intensified once Republican lawmakers and presidential candidates began calling for a halt to refugees from the Mideast after terrorist strikes in Paris and San Bernardino, Calif., late last year.

Sen. Ted Cruz (R-Tex.) and former Florida governor Jeb Bush (R) have suggested screening asylum seekers on the basis of religion and accepting only Christians. And in December, Republican presidential front-runner Donald Trump called for a “total and complete shutdown” of the entry of Muslims to the United States “until our country’s representatives can figure out what is going on.”

More broadly, Cruz and several other Republicans have criticized Obama and Democratic presidential candidate Hillary Clinton for refusing to use the phrase “radical Islam” when discussing terrorist activities.

Obama has increasingly spoken out against the anti-Muslim rhetoric.

“When politicians insult Muslims, whether abroad or our fellow citizens, when a mosque is vandalized, or a kid bullied, that doesn’t make us safer,” he said during his State of the Union address this month. “That’s not telling it like it is. It’s just wrong. It diminishes us in the eyes of the world. It makes it harder to achieve our goals. It betrays who we are as a country.”

Speaking at the Israeli Embassy Wednesday night at the first Righteous Among Nations awards banquet held in the United States, the president said the impulse to stigmatize people of other faiths is “deep within us.”

The president is making the visit “to celebrate the contributions Muslim Americans make to our nation and reaffirm the importance of religious freedom to our way of life,” a White House official wrote in an email Saturday. “As the President has said, Muslim Americans are our friends, and neighbors; our co-workers, and sports heroes — and our men and women in uniform defending our country.”

The official added that the event, coming just days after Obama spoke out against anti-Semitism and right before his appearance at the National Prayer breakfast, amounts to “reaching out to our fellow Americans to let them know we’re here for each other, regardless of where they come from, or what they look like, or what faith they practice.  This is a message the President wants every American – of all faiths – to hear.”

Former White House senior adviser Dan Pfeiffer wrote in an e-mail that the symbolism of Obama visiting a mosque would resonate nationwide. “The President of the United States is the most powerful person in the world,” Pfeiffer wrote, “and his presence sends a very powerful message to the Muslim American community.”

One close watcher of the role of religion in presidential politics said the timing of events next week was not a coincidence and that the mosque visit would be a stark contrast with the anti-Muslim rhetoric coming from multiple leading GOP candidates.

“By linking those two events so closely — that’s politically significant,” said the person, who spoke on the condition of anonymity because they did not want to upset the administration.

It was not immediately clear why the White House selected the Islamic Society in Baltimore, although it has been the subject of threats in recent months. Baltimore County beefed up security there last spring after it received two phone threats, one citing a bomb and the other from someone threatening to “spill Muslim blood,” CBS Baltimore reported at the time.

It also is the mosque of the family of Adnan Syed, whose conviction for murder drew huge global interest when his story was told through the radio podcast “Serial.” The series was made because of the activism of a friend of Syed’s family from the Islamic Society, Rabia Chaudry, a Greenbelt lawyer who advises law enforcement about Islam, the Baltimore Sun reported in 2014.

Hoda Hawa, director of policy at the Muslim Public Affairs Council, an advocacy group that has been involved in discussions with the White House about a mosque visit, said the Islamic Society is “the average Joe mosque” — meaning it has no newsmaking components or leaders and perhaps had been chosen for that reason.

Obama has visited several mosques overseas but never one in this country while serving as president.

“I think it would be enormously comforting and also send a powerful message to Americans about recommitting to religious freedom — especially if we had Bush and Obama visit together,” Farhana Khera, executive director of Muslim Advocates, a legal advocacy group, said last month when she met with the president’s aides.

Obama’s relationship with American Muslims has been complicated. They are among his most enthusiastic backers, but some feel he has not done enough to address their concerns at a time of social unrest.

He has shown support for Muslims overseas, including the 2009 “New Beginning” speech in Cairo before the Arab Spring, and he has drawn praise — and intense criticism from conservatives — for declining to connect Islam and terrorism.

However, concern about profiling and domestic surveillance at mosques has escalated under Obama, and some Muslim leaders expressed concern last year when he held a key summit about violent extremism that focused significantly on Muslim extremism.

During his tenure, American Muslims have become more institutionally organized, and a wider diversity of Muslim perspectives have become public, including on issues such as Obama’s policies in Syria or the fact that the military detention center at Guantanamo Bay, Cuba, remains open. However, Hawa said, most Muslim organizations feel their voices have been heard much more under this administration.

“We have at least had a seat at the table, and that is a level of engagement we haven’t seen for some time,” she said. The end of the administration is a “critical point. We don’t know who will replace him, but regardless, we need to be involved in the conversation.”