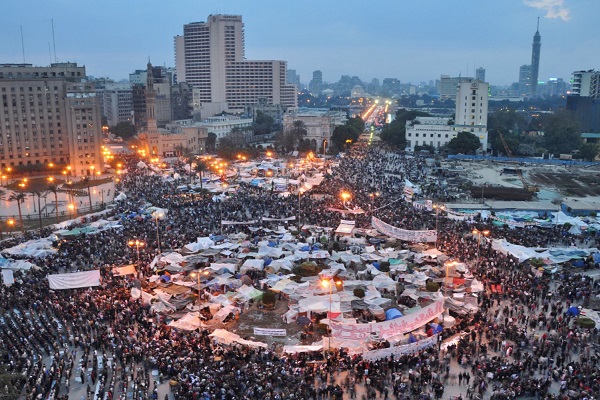 The streets of Egypt’s cities were somber Monday, the five-year anniversary of the January 25th “Day of Rage” against poverty, joblessness, political corruption and most notably, the three-decade regime of President Hosni Mubarak. Within weeks, the millions who occupied Tahrir Square and streets across the nation toppled Mubarak and began what they hoped was a path to change.
Egyptian state media reported Monday there were minor anti-government protests in several governorates.  There were no official reports of casualties.
Egypt’s Middle East News Agency also reports that dozens of pro-government demonstrators marched in Tahrir Square, handing out flowers and candy to police to mark National Police Day, also celebrated on this date.  The government took stringent measures to ensure that the only demonstrators in Tahrir were government supporters.

Egyptian police killed two “members of a terrorist group” on the outskirts of Cairo during a gunfire exchange.  Egypt is countering an insurgency from Islamists tied to the Islamic State group.  The government also brands the now-banned Muslim Brotherhood a terror group.

Five years after the uprising began, say activists, many Egyptians are facing an even more daunting challenge than they did in 2011.“Today’s Egypt is different, far more oppressive, far more frightened of the alternative,” Cairo journalist Wael Eskandar told VOA in a Facebook chat.
That said, he believes the revolution continues.
“The revolution is a long process, and judging by today’s remembrance of it, it seems that it’s not over,” he said.  “The fact that the regime still views it as a threat means that it’s not over.  Whether it will be in the future is another matter.”
A cartoon circulating on Twitter comments on the government of President Abdel Fattah el-Sissi’s fears of another popular revolt.  The Egyptian leader is seen pressing his back against a door, from behind which a voice calls, “Open up, Mr. President.  It’s me – Tomorrow.”

During the past two weeks, Egyptian security forces raided more than 5,000 homes, looking for signs of another revolution in the making, a dramatic escalation, say activists, of a crackdown that has been taking place since Sissi was elected.

For Eskander, #Jan25 is more than just a hashtag or a date in history.
“It’s important that it is remembered not just as a romanticized event that simply ended, but something ongoing,” he said. “It’s an idea that withstood the regime’s attempts at crushing it, defaming it and co-opting it.”
And he added, “I’m not saying that to motivate anyone, but because that’s the truth.”
Tags: al-Sissi in Egypt Arab Spring Arab Springs of Egypt corruption Egypr Egyprian revolution Hosni Mubarak Tahrir square