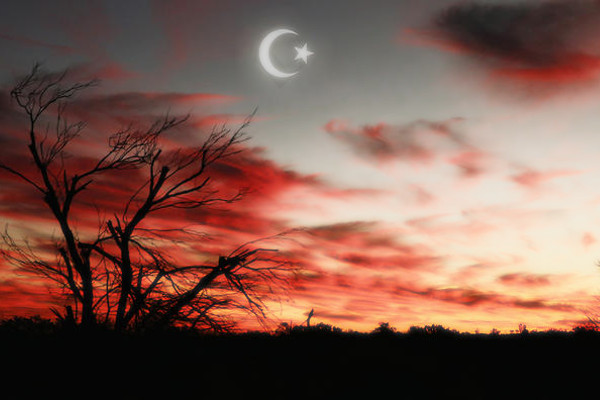 AYERS ROCK, AUSTRALIA - APRIL 21: The sun sets near Uluru, also known as Ayers Rock at sunset on April 21, 2014 in Ayers Rock, Australia. The Duke and Duchess of Cambridge are on a three-week tour of Australia and New Zealand, the first official trip overseas with their son, Prince George of Cambridge. (Photo by Scott Barbour/Getty Images)

Two cultures who met to trade and exchange commerce, two cultures that showed mutual respect and understanding of each others values, language, customs and laws.

Two cultures that sustained a co equal relationship for three centuries without ever having fought a war, they never sought to establish government over the other, they traded and engaged in commerce as business partners and never felt so insecure in their own culture  that they needed to destroy or diminish the cultural symbols of the other.

(Bio: Patrick Dodson (born 1948) is a Yawuru man from Broome, Western Australia, he is a former Chairman of the “Council for Aboriginal Reconciliation”, a former Commissioner into Aboriginal Deaths in Custody and former Roman Catholic priest. He was the winner of the 2008 Sydney Peace Prize)

Often when I am asked to give an address to a conference or an event it is usually in the context of a particular issue confronting Indigenous people and their encounter with the wider community.

To enlighten or inform, to assert a position or to seek justice for an injustice imposed.

So when Dr Ozdowski kindly invited me to address this conference here in Western Sydney on the participation by Muslim people in the tertiary education system I was somewhat surprised but equally intrigued as to how as a Yawuru man from Broome I might bring some worth to the discussion that began last night with Tom Zubrzycki’s film “Temple of Dreams” and will be followed this morning by presentations and commentary from so many gifted and knowledgeable presenters and conference delegates.

As is often the case the answer to a part of the dilemma of understanding the task ahead lay in the streets of the town where I was born and where I live – in Broome in Western Australia.

Some of the first Muslims who came to Australia in the late nineteenth century were Malays who were indentured by their then colonial masters the Dutch to work in the Pearl Industry that was in its infancy on the North West Coast of Australia.

These young Muslim men left their homes in the Dutch East Indies colonies and came as indentured workers subject to the whim and discretion of the European Pearling Masters who controlled the pearl industry at that time.

The were set to work among the Aboriginal people who had been black birded by the same Pearling Masters and forced to free dive from the luggers to the bottom of the ocean so as to retrieve the highly valued pearl shells.

Muslim indentured labour and Aboriginal slave labour – representatives of two ancient cultures – the visitor and the land owner suborned to the money making needs of yet another culture.

This unequal, master/worker experience between Muslims and the colonial Australian society stands in contrast to the first encounter between Muslim people and the Aboriginal Australians an engagement that had occurred 300 years before the arrival of the first pearl lugger off the North West Coast of Australia and established a relationship that was to last for three centuries.

It was the encounter between the Macassan people of what are now known as the islands of Indonesia and the Aboriginal people along the length of the Northern Australian coastline in Arnhemland.

It has arguably been the most successful encounter ever between any two cultures on this continent.

Two cultures who met to trade and exchange commerce, two cultures that showed mutual respect and understanding of each others values, language, customs and laws.

Two cultures that sustained a co equal relationship for three centuries without ever having fought a war, they never sought to establish government over the other, they traded and engaged in commerce as business partners and never felt so insecure in their own culture  that they needed to destroy or diminish the cultural symbols of the other.

By the end of the 19th century the colonial authorities in Northern Australia were so worried about the relationship between the Macassans and the Arnhemlanders (Yolgnu) and its strength that the Macassans were banned from northern waters and the trade between the two cultures was deemed illegal.

Perhaps if the model of engagement established by the Muslims of Macassa and the Aboriginal people of Northern Australia had been adopted by the English when they decided to invade in 1788 then the history between us all over the past 220 years may have been a very different story.

The early experiences of encounter for Muslims in Australia from:

The descendants of the Malays indentured workers still live with us in Broome.

The language of the Macassans and the beautiful trees that they planted over three centuries are part of the lives of the Aboriginal people of Arnhemland to this day and the descendants of the Afghan merchants and camel train drivers are represented in our parliaments and in commerce and industry throughout Australia.

But in each case these Muslim communities and the Aboriginal people have sustained their relationship.

The nature of engagement by different Muslims groups in this country has varied a great deal. By and large the experience has enriched all who chose to engage. In this country, in recent years our capacity for engaging and embracing the best aspects of the cultures and values of different societies has been sorely tested.

Our multi cultural society built on the back of tolerance, patience and a capacity to see the worth of our fellow human being has become a point of mockery and derision for some in our society. They are so insecure in their own culture and values that they cannot abide others who value diversity and difference.

The bigot will find comfort in his isolation but the loneliness of his bigotry demands that he ridicule the symbols of those who stand above his cultural poverty.

In recent times, the mob has gained some temporary ascendancy in this country. It has manifested itself in the gown of Hansonism .A gown that uses the stolen colours of liberty, fraternity and equality and set out to besmirch the integrity of many Australians who do not subscribe to the hatred and intolerance of the bigot.

But this is a temporary ascendancy of the bigot. We have had cycles of this disease many times before in this country. At different times it has been aimed at the Aboriginals or the Chinese or whatever migrant group happened to be the most recent arrivals at any given time in our history.

It should never be a necessary rite of passage for each new group of arrivals in any country to be subject to racism, abuse and vilification but it tends to be that the least understood or most vulnerable become the target of the racist elements of our society.

Racists, whom we seem destined to have crawling over our national body politic like lice on the back of a sheep.

They are there and will inevitably remain despite our best democratic efforts. So long as there are people in our society who are prepared to countenance their existence or who are prepared to use this bigotry as an opportunist political tool whenever the circumstance presents itself they will remain.

The Universities and Tertiary Institutions of this country do have a very good record in many instances of accommodating difference and have shown a great capacity to accommodate diversity.

But building inclusive structures and providing a welcoming environment for diversity and the nurturing of knowledge are ongoing tasks.

Our institutions of learning must be active in challenging racism and looking at ways of enhancing the capacity for minority groups to participate in the critical endeavour of learning and civilizing our communities.

They must create symbols of tolerance, promote experiences of diversity and accept the need to accommodate difference as an asset not a barrier to greater participation.

The Muslim Community of this country has a long and proud history which is simply an extension of a much longer and greater history going back to a time when Christian civilizations were on the verge of collapse and entering a period of their own naming – the Dark Ages.

The greatness of the Muslim societies was underpinned by the skill of your architects and engineers, the wisdom of your philosophers, the words of your great poets, the bravery of your soldiers and the acumen of your businessmen and women.

Muslims did not differentiate between their responsibility to their faith and their worldly profession. To behave ethically and honestly in your trade is a religious responsibility as well as commercial good practice.

So for young Muslims in this country you have come with some very serious responsibilities to carry on the traditions of a society and a faith that has set some very high benchmarks.

Benchmarks established centuries ago but as relevant to your lives today as they were to your forebears. These are benchmarks that have seen Muslims as leaders in every sphere of the arts, the sciences, law and the humanities for centuries.

A failure by young Muslims in this country today to defeat intolerance and racism and so become an underclass excluded for a generation is an unacceptable outcome for yourselves as individuals but also for our community.

If you choose the path of assimilation into the Australian society at the price of your Muslim identity you will perhaps secure your personal elevation but then be simply an Australian of Muslim descent.

On the other hand if you are able to take the path that aligns the values of your society and your faith with your responsibilities as a citizen then you have an opportunity to establish yourself as an Australian Muslim citizen with an amalgam of the best that these two elements represent.

The opportunity to achieve great things as a Muslim and an Australian citizen are in abundance.

The contribution that you will bring as members of a vibrant community with a rich culture and faith will enhance the nation’s universities and colleges. The medical schools and law faculties will be enhanced by your presence and your contributions and when you go forth from them you will enrich our professions, our society, our nation and your community.

Stand in solidarity with others when they are oppressed because their security is your responsibility. Treat intolerance with disdain, cast the slurs of bigots into the abyss, assert the values of your faith in an instructive manner but do all of these things using the powers of your intellect, the strength of your faith and the understanding acquired from your search for knowledge.

The prophet was a man who understood the power of books and he understood that there was knowledge beyond the circle of his own society.

Following the Battle of Badr He decreed that all the prisoners of war could be released on the condition that each prisoner was required to teach 10 Muslim children to read and write.

A man of justice to release the defeated,
a man of business to get a return on the release;
and a man so secure in his faith that he could entrust the teaching of his children to those not of his faith.

And in that is a lesson for us all.