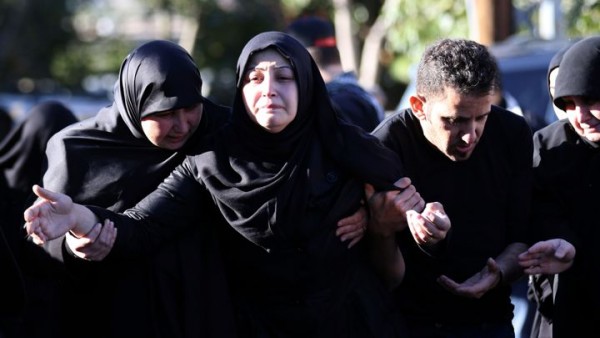 Lebanon, Beirut – Because the Lebanese community is one of Australia’s largest and oldest immigrant groups, it was not entirely surprising to see Lebanon’s flag projected on to Sydney’s iconic Opera House as published by a local news site.

But that image of solidarity after last week’s Beirut bomb attacks proved to be a digitally altered fake, underscoring the double standard that lurks beneath the myth of global compassion for victims of such attacks.

Lebanese bloggers and tweeps were quick to point out that while monuments across the world had been lit up with the French flag out of respect for the victims of Friday’s attacks in Paris, there was no parallel lighting or homage to the victims of twin suicide attacks in Beirut a day earlier.

The irony was not lost on some in the Australian press, who noted that there were three times as many Lebanese Australians as French Australians. And yet, when the country’s prime minister, Malcolm Turnbull, tweeted “Australians’ thoughts, prayers & resolute solidarity with the people of France”, there was no mention of Lebanon.

“You’d think if we were able to identify with anyone, it would be with Lebanese Australians – after all, so many of them are among the most beloved in this nation, and have contributed enormously to public life,” wrote Chris Graham in New Matilda.

In Washington, meanwhile, US President Barack Obama dubbed the Paris bombings an “attack on all humanity”, but once again, as the prominent Lebanese academic Saree Makdisi tweeted, the Beirut bombings were “not worth a mention”.

But what was perhaps even more disturbing than the omission of the Beirut attacks from the international stage of outrage was the number of Western news reports that sought to categorise Lebanese victims rather than mourn them.

Initial headlines about the killings in France were objectively descriptive, if not sympathetic: “Paris Attacks Kill More Than 100, Border Controls Tightened” according to the New York Times as Reuters proclaimed: “Disbelief, Panic as Militants Cause Carnage in Paris”.

But in Beirut, mere descriptions of the violence and anguish on the streets were not enough. Headlines immediately diluted the massacres with qualifying adjectives that labelled the victims according to their geography and assumed political leadership.

In the opening paragraphs of stories about Paris, Reuters and the New York Times narrate scenes of horror, laced with chilling quotes from the victims and police efforts to apprehend the terrorists.

Buried deeper in the body of the stories, a token mention of France’s military involvement in Syria briefly appears. By contrast, in stories about Beirut, the military and geopolitical details take centre stage – nearly every paragraph examines Hezbollah’s deployment in Syria. There are virtually no quotes from the victims and the word “terrorism” is rarely used.

In Paris there are detailed descriptions of the music venue and sports stadium where the violence took place. In Beirut there is little or no mention of the marketplace, mosque or school that bore the brunt of the explosions.

When the coverage rationalises a tragedy as part of a military conflict, it both dehumanises the victims and serves the interests of the attackers by increasing one-dimensional stereotypes and thus ‘othering’ those who suffer in faraway places. Not only do these narratives feed into rightist, xenophobic or Islamophobic political views, they also colour the perceptions of readers and editors at mainstream publications.

Take an analysis piece that appeared in the Huffington Post less than 24 hours after the Beirut attacks which flatly suggested that the tragedy was to be expected. “It was a matter of time before residents of Dahiyeh, the Hezbollah-controlled suburb of Beirut Lebanon, were bombed again,” a fellow at a Washington think-tank wrote.

Can one imagine an article a day after the Paris bombings claiming it was just “a matter of time” before Europeans were massacred?

Rather than focus on the cruelty of the suicide bombers, the Huffington Post piece actually interrogates its victims. The focus was not on terrorist cells or their financiers, but rather the “predicament” of “the Shia community”, a “hijacked population” which is “trapped”, “stuck” and “will always remain imprisoned by its leaders”. The author’s only hope for change? “Perhaps the Lebanese Shia Muslims are just several suicide bombings and innocent deaths away from questioning Hezbollah’s mission in Syria.”

Can one imagine the response if the Huffington Post published a similar piece suggesting the Paris attacks were related to a “predicament” in Parisian society? That the innocent civilians were killed because their leadership had failed them, or that France’s population had been “hijacked” by imperialist military policies? Would such a piece be given a prominent space in the publication or be dismissed by editors as Islamic State of Iraq and the Levant (ISIL) propaganda?

And what if one wistfully wrote that Paris was just “several suicide bombings away from questioning” its government’s policies in the Middle East? Would the Post’s editors approve such a piece just 24 hours after the tragedy?

Can we imagine how quickly readers and perhaps even politicians would attack the site and accuse it of being the bombers’ mouthpiece? Similarly, imagine the reaction had a news site published a piece on September 12, 2001, questioning the ‘misguided’ population of Manhattan, a day after planes had collapsed the World Trade Center towers?

But in Beirut, what is even more problematic than a geographic or political rationalisation of explaining attacks is one that identifies a sectarian description as their cause, ie, a “Shia community problem”. Can one fathom the justifiable outrage if an attack on a church or synagogue or particular ‘ethnic’ neighbourhood was explained as Christian or Jewish or an ethnic problem?

In the days and months ahead, the victims of Paris will be chronicled in greater detail, the tributes will pour in as the victims of Beirut, Baghdad, Homs and elsewhere slip further into oblivion.

But technology is increasingly giving voice to those on the margins, and news organisations are under added pressure to respond to complaints, which are becoming harder to ignore when amplified on social media and alternative platforms.

‘A mind-set reset, not a headline reset’

The author of the piece, the New York Times Beirut bureau chief Anne Barnard, tweeted in response to questions that the change of headline was requested by her, not the audience. But in a private message she also admitted that it was an “annoyed tweet” that alerted her to it. “I would have requested the change regardless,” Barnard wrote. “But social media might have sped it up by alerting me to the headline…”

New York Times pieces from 2013 and 2014 also used “Hezbollah stronghold” in headlines about bomb blasts in south Beirut. So will the latest change set a precedent for future accounts? Will it possibly influence other outlets such as Reuters, CNN, MSNBC, FOX News and hundreds of English-language newspapers and websites that continue to employ the “Hezbollah Stronghold” terminology?

The implications extend far beyond Lebanon and headlines. It is the entire newsroom and the worldviews of journalists and editors that is at stake. As commentator Rula Jebreal put it: “NYT needs a mind-set reset, not a headline reset.”

Beyond journalism, many in the region wonder when the Sydney Opera House and other world landmarks will project their Syrian, Yemeni, Palestinian, Iraqi or countless other flags from places that have been wounded far more frequently than France. Perhaps in the meantime, those cities need to be spammed with some photoshopped images of what a more inclusive victim solidarity would look like.

Habib Battah is a freelance journalist and editor of the site Beirut Report.