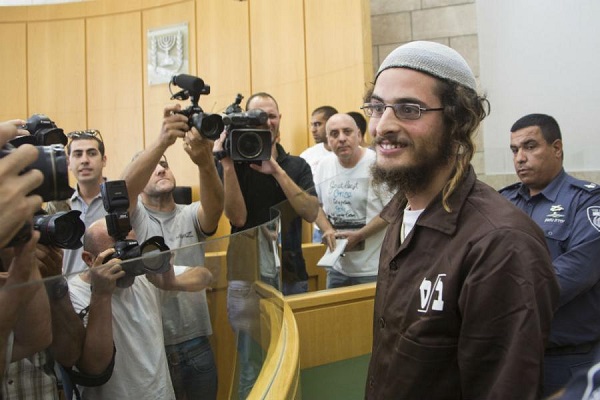 Meir Ettinger, the head of a Jewish extremist group.

Some of my best friends demand that I write an article condemning unconditionally the “administrative detention” of Jewish terrorists. Three suspected terrorists have already been arrested under this procedure.

They are members of a group following the teachings of Rabbi Meir Kahane (the leader is actually his grandson). Kahane was an American Rabbi who came to this country and founded a group branded by the Supreme Court as racist and anti-democratic. It was outlawed. He was later assassinated by an Arab in the US. An underground group of his followers is now active in Israel.

This is one of the groups which belong to a clandestine movement, generally called “Price Tag” or “Hilltop Youth”, that has conducted various acts of terrorism, setting fire to Christian churches and Muslim mosques, attacking Arab farmers and destroying their olive trees. None of the perpetrators has ever been apprehended, either by the army, which acts as a police force in the occupied territories, nor by the police in Israel proper. Many army officers are themselves residents of settlements in the occupied West Bank, which are illegal under international law.

The Israeli public has paid little attention to these outrages, but lately things have happened that shocked even complacent Israelis. One was the firebombing of an Arab dwelling in the small village of Douma in the West Bank. Under cover of darkness, a fire bomb was thrown into the home of a poor Arab family. An 18 month-old baby was burned to death, his father, mother and brother were seriously injured. The father later died in hospital.

Such acts of firebombing are quite usual, though until now the Arab families succeeded in saving themselves.

Another outrage was committed in Jerusalem – against Jews. An ultra-orthodox Jew attacked the annual gay pride march in the center of the city. He succeeded in stabbing several marchers, one of whom – a 16 year-old girl – later died of her wounds. The perpetrator had done exactly the same 10 years ago. He served a long prison term, was released a few weeks ago and did it again. He is an ultra-orthodox Jew, but seemingly has no connection with the Kahanist gang.

This was too much. For years, no one was ever indicted for acts of Jewish terrorism. Many believe that the acts were committed in collusion with the occupation army and the Shin Bet, the interior security service. Now, however, there is a public outcry, and the authorities have come to the conclusion that they must do something.

Administrative arrests are a legacy of the British colonial regime that ruled Palestine until May 1948. The Israeli state took it over, changing only some minor aspects.

This form of arrest allows a military commander to put a person in prison without trial. The warrant is in force for six months, but can be renewed without limit. Every few months the prisoner must be brought before a regular judge, but judges interfere only on rare occasions. Mentally, Israeli judges stand at attention when a military officer testifies.

The prisoners have no right to see the evidence against them and confront their accusers, nor are they allowed to be represented by attorney. The official reason is that they cannot be put on trial without “burning” informants and other sources of valuable information that are vital to effectively combat terrorism and save lives.

This instrument is used all the time against Arab suspects. At this moment, many hundreds of Arab administrative prisoners fill the prisons, some of them have been in custody for many years. Since the beginning of the occupation in 1967, hundreds of thousands of Arabs have been incarcerated under this act. For young Palestinians, this is almost a badge of honor.

Hardly any Jew has ever been held in administrative detention. For many years now, this means has not been used against Jews at all. The three Kahanists who were sent to prison this week are the first for a very long time.

Military and civilian officials explain this kind of detention as an essential and irreplaceable means to combat Jewish terrorism. All the Kahanists and other fascist perpetrators are trained to be silent under interrogation. Since they are sure that they will not be tortured, they have no reason to talk. They laugh in the faces of their interrogators.

Arab prisoners, of course, enjoy no such privilege. They know that if they don’t talk, they may be tortured. Under Israeli law, torture is forbidden, but the court allows something called “moderate physical pressure”, which achieves quick results.

Yet even so, many Arabs languish under unlimited administrative detention, because there is not enough legally admissible evidence to indict them in court, without endangering “sources”.

At present, the three Jews held in administrative detention are held in three different prisons, with more to join them soon, the Shin Bet promises.

Many years ago, when I was the editor-in-chief of the Haolam Hazeh news magazine, we published for a time an Arab-language edition. One day, one of my Arab employees – let’s call him Ahmed – was put in administrative detention.

When I started to raise hell, I got a surprise call from the Shin Bet. The relations between this organization and me were strained from the first day of the state. This may be an understatement, since their chief once officially defined me as the “No. 1 enemy of the regime”.

To my utmost surprise, a high-ranking Shin Bet officer invited me for a talk. “I am going to trust you with top secret information,” he said, “because I want you to understand our problems.”He then told me that his people had caught a messenger who was sent to Israel by one of the major terrorist organizations to contact local collaborators. One of these was our Ahmed.”What do you want us to do? We cannot put him on trial, because we have no proof that he is member of the organization. But leaving him free could result in deadly terrorist acts. Administrative detention is the only safe option.”

I did not believe that Ahmed was a terrorist. I was still thinking what to do, when I was saved from the dilemma. The Shin Bet agreed to release Ahmed, on condition the he leave the country. He went to the US and obtained a Green Card (perhaps with the help of Shin Bet). At one of my lectures there I saw him sitting in the front row. We embraced.

I am telling this story for the first time in order to illustrate the dilemma. Letting these Jewish fascists roam freely could cost more Arab and Jewish lives, and perhaps a catastrophe, for example if they set fire to the holy Muslim shrines. There seems to be no solid evidence against them. If there are Shin Bet informers in this group, their testimony at a trial would “burn” them.

The Shin Bet and the police are accused by many of us of utter incompetence when confronted with Jewish terrorists, while being extremely efficient when confronted with Arab ones. Worse, we suspect the Shin Bet of being infiltrated by the settlers and of collaborating with them. Depriving the Shin Bet of the means of administrative detention may weaken them even more, or at least provide them with a pretext for total failure.

In my late childhood I witnessed the breakdown of the democratic “Weimar Republic” in Germany. The Nazi hoodlums were roaming the streets, beating up people who looked Jewish, exchanging fire with Communists. The government was ineffective. Police and army were infiltrated by Adolf Hitler’s party. Judges punished the communists severely, but often let the Nazi “patriots” off the hook.

Years later, when Germany lay in ashes, the Weimar Republic (so called, because its constitution was written in Weimar) was accused of cowardice, because it did not dare to use the instruments it had at its disposal – including non-democratic emergency powers – to fight the Nazis in time. Does the Israeli Republic want to risk the same fate?

It is a real dilemma. It demands real answers. Not the easy answers derived from the liberal handbook. Responsible answers. Answers which are relevant to the real world.

I believe that the Kahanists and the other fascist groups in today’s Israel are far more dangerous than most people believe. This is not a handful of wild weeds as we are led to believe. This is a national cancer that can spread quickly in our national body.

I have seen it before.

It is a difficult dilemma. For me, in any case.

Do we approve of administrative detention, detention without trial and democratic safeguards, perhaps saving thereby the lives of Arabs and Jews, perhaps preventing worse disasters?

Or do we uphold strict democratic principles, release all people held in administrative detention, Arabs and Jews alike, knowing that some of them will go on a killing spree?

After much soul-searching, I vote for the second option. Both for moral and pragmatic reasons.

Morally, I do not believe that one can fight the plague with cholera. Administrative detention is a fascist instrument, even when applied to fascists.

Practically, because it will not help. The detainees will be replaced by others, perhaps even worse ones.

There is also the danger that the arrest of a few will serve as an excuse for doing nothing against the many.

To fight this plague, we need better doctors. The Shin Bet, police and army must be cleansed of fascist sympathizers, officers loyal to the Israeli Republic must take their place. Jews and Arabs must receive the same treatment.

As the Bible commanded: “Let your camp be clean!”