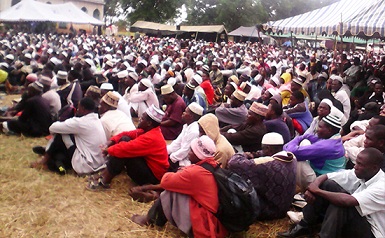 The Malawi Muslim community has joined hands with sectors across the region in the fight against rising levels of teenage prostitution which is said to have reached alarming proportions in the impoverished southern African nation.

“There are growing levels of teenage prostitution in the country. There are hundreds of teenagers in brothels and on the streets in our cities and towns, selling their bodies for a living; a situation which, if left to continue, will kill the social fabric of this country,” Alhaj Jafaliee Kawinga, president of Muslim Forum for Democracy and Development (MUSFORD), told OnIslam.net.

“It is this situation which has compelled us to roll off an initiative to save our teenage girls from this inhuman act. We are going about sensitizing the communities irrespective of their religious beliefs on the evils of this, so that everybody should get involved in fighting teenage prostitution,” Kawinga added.

According to the Ministry of Women, Child Welfare and Community services, scores of children as young as 10 are being employed in brothels where they are paid little money for their survival.

Kawinga said his organization is empowering law enforcement officials, traditional and religious leaders, to cooperate in rooting out this fastest growing phenomenon.

“By empowering these influential groups, we are certain that the number of children embarking on this undertaking will be minimized. These groups of people live with the children in the communities; it’s therefore easy to put this practice to a halt.”

The Muslim leader attributed the problem to high levels of poverty and breaking of the family unit in a country rated by the World Bank as one of the poorest in the sub-Saharan Africa, with its majority poor struggling t to survive on less than US$1 a day.

“There are growing levels of poverty in the country and this, coupled with deaths resulting from HIV and AIDS which has taken a huge toll on families – leading to deaths of bread winners – have left scores of orphans with no sustainable support, Kawinga said.

“And in a desperate attempt for survival, children have taken to the streets as prostitutes,” he added.

Concurring with Kawinga, Sheikh Muhammad Idrissa, and national chairperson of Muslim Association of Malawi (MAM), said his organization has noted with “deep concern” a rise in child prostitution in the country.

“Despite the menace of HIV and AIDS pandemic, we have lately seen teenage prostitution flourishing in Malawi,” Idrissa told OnIslam.net.

“Children are fleeing from their homes to stay in brothels in the cities and towns, where they are earning money for a living. This is a disturbing and worrying development to this country, which has one of the highest HIV and AIDS cases in Africa.”

He said as a parent body of Muslims in the country, his organization has reached out to the faithful with messages which would help fight this rising “pandemic.”

“We are calling on the public to rise up to this challenge, before it becomes so devastating. We can’t talk of combating HIV and AIDS, if we let teenage prostitution to flourish. The whole purpose of combating the pandemic would be meaningless,” Idrissa said.

“Whether one is a Muslim or not, let us together rise up and defeat this phenomenon. This is a pandemic we have to fight against. We are religious Muslims; let us therefore nip out this growing challenge in our community.”

The Catholic Church, the country’s largest Christian denomination, is also engaged in the fight against child prostitution.

Father George Buleya, Secretary General of the Episcopal Conference of Malawi (ECM), said unless teenage prostitution is eradicated the country was in danger of losing its productive citizens to HIV and AIDS pandemic.

“We understand that poverty is fuelling the use in teenage prostitution, and unless this was put to a stop, the country is likely to witness deaths of its productive citizens,” Fr. Buleya told OnIslam.net.

“These children are the future of the country, and if they [are] left to engage in this deadly practice at this stage, what kind of a country are we going to have? We really need to fight this to the letter.”

The Catholic priest then appealed to all faith groups to rise above their religious differences and fight child prostitution.

“We should admit that this is a huge and growing challenge, which is before us. We need therefore to rise up above our religious beliefs to defeat this. Let us at all cost save our children from this destructive behavior,” Fr. Buleya said.

Justin Hamera, coordinator for the Child Protection Project in the ministry, said they have withdrawn a lot of children who were employed for prostitution.

“Through our child protection officers, we are using dialogue with brothel owners to release the children. In [a] situation where they do [not] comply, we involve the police. Through this approach, we are slowly making an impact,” Hamera told Onslam.net.

The Malawi Human Rights Commission is part a multi-sectoral approach engaged in the fight against child prostitution in Malawi.

Emilia Tembo, executive director of the commission, said her organization has carried out civic education among brothel owners to discourage them from taking advantage of desperate children to lure them into this malpractice.

“This act is inhuman. The children who are engaged in prostitution are quite very young. Most of them are being forced against their will, because they have no alternative source of livelihood,” Tembo told OnIslam.net.

“They easily fall prey to prostitution. But through civic education with brothel owners, we are seeing a reduction in the number of children flowing to the cities for prostitution.”

Prostitution in Malawi is illegal, however there are no stern laws criminalizing it.

For this fight to be won, Kawinga said there was need for government, local sectors and society at-large to economically empower the communities so that upon the death of bread winners, children could be supported for their survival.

“If communities had to provide for orphans after the death of their parents or guardians, we would be assured of an end or reduction in child prostitution in the country. There is need for a mechanism to empower communities in various aspects,” he added.

Malawi is a secular, but diversely religious nation. Islam is the second largest religion in the country, after Christianity. Muslims account for 36 percent of the county’s 14 million population.