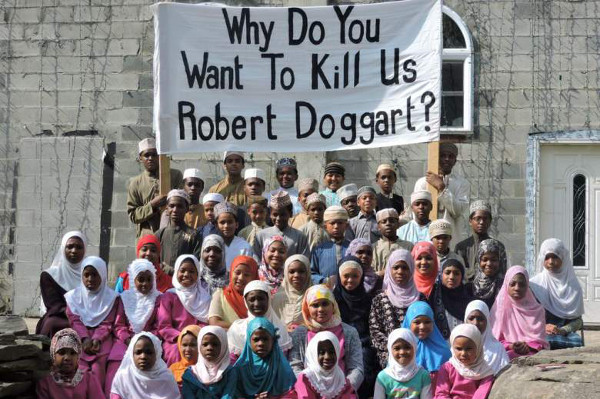 A Muslim cleric devises a terrorist plot to lead a group of nine men to attack Christians in the United States. The plan involves burning down a church and slaughtering Christian worshipers.  And these attackers will be well armed with assault rifles, explosives, and even a machete to cut these Christians “to shreds.”

If that Muslim cleric had been arrested shortly before the attack, he would have rightfully been charged with terrorism and held without bail. But when that identical plot is concocted by a Christian minister planning to slaughter Muslims who live in upstate New York, not only is he released on bail and not charged with terrorism, he’s possibly going to walk free.

These are the facts of the case of Robert Doggart, a Christian minster I wrote about in May. Doggart, via an FBI wiretap and conversations with an FBI informant, had revealed his detailed plan to travel from his home in Tennessee to New York state to attack the people of Islamberg, a community of approximately 200 black Muslim Americans near the Pennsylvania border.  He viewed this Muslim community, which right-wing media outlets have long demonized, as a threat to America.

As noted by the criminal complaint, Doggart spoke of his willingness to sacrifice his life to prove his “commitment to our God.” He also exalted his followers to be “cruel” to these Muslims, to burn down their mosque, kill them, and even cut them to shreds with a machete.

In preparation for his terrorist attack, Doggart also met with an undercover FBI informant in Nashville, Tennessee. At the meeting, Doggart shared details of how he planned to build the explosives he would use in the assault and even displayed some of his weaponry, including his M-4 military assault rifle.

You get the picture. Doggart was not some guy sitting in his room ruminating about Muslims taking over the country. Rather, he had engaged in a great deal of planning, including making a detailed weapons list that included armor piercing bullets, reaching out to militia groups, and allegedly enlisting the support of nine men. Thankfully he was arrested before he could launch his attack.

The focus of my earlier article about Doggart was our media’s double standard when it came to covering terrorist plots that involve Muslims as opposed to the Doggart case. At that time, I literally begged producers at various cable news channels to cover the story.

Why? Simply because we need to be just as vigilant about terror threats emanating from the right as ones posed by ISIS and al Qaeda. Perhaps if we were, the June 17 terror attack in Charleston, South Carolina, that resulted in the assassination of an African-American state senator and eight other African Americans by a white supremacist who wanted to start a race war, would’ve been prevented.

Instead, when the shooter’s friends observed images of him on social media wearing white supremacist symbols or heard his comments like “blacks were taking over the world” and “someone needed to do something about it for the white race,” they discounted it as no big deal.

My efforts, however, to secure more national media coverage for the Doggart case were rejected by producer after producer, with a range of comments from “it’s not a national story” to “I bet he’s mentally ill.” (Of course, the identical plot by a Muslim would’ve resulted in headlines nationwide.)

At the time, Doggart was being held without bail. He had entered into a plea agreement to one count of making threats using interstate communications and was facing five years in federal prison. At least there was some solace in the fact he was no longer a threat to the public.

But that has all changed. Doggart has since been released on bail. (As opposed to the three men arrested a few months ago planning to join ISIS who are being held without bail.) And even more astounding is that the federal judge handling the case has recently indicated that he may not accept the guilty plea because he’s unsure if Doggart’s actions constitute a “true threat” as required by the federal statute.

What is so bizarre about this development is that Doggart personally signed a plea agreement deal, along with his attorney, on April 24, 2015, admitting that he had engaged in the alleged conduct, and he stipulated expressly that it amounted to a “true threat.”

So how rare is it for a judge to reject a proposed plea deal agreed to by both the prosecutor and defendant? Seema Iyer, a former prosecutor and current criminal defense attorney, explained that she has only witnessed a judge do this two or three times ever in her nearly her 20 years of criminal law work.

Iyer, and I as a former trial attorney, are truly baffled by the judge’s hesitancy. How could any reasonable person believe that Doggart’s actions in painstakingly planning his terror attack could be considered anything less than a “true threat,” which is one made by a person ”with knowledge that the communication will be viewed as a threat”?

The judge is expected to announce his ruling next week . If the judge rejects the plea deal, then the case likely goes to the grand jury. However, as we all learned from the Eric Garner and Michael Brown cases, that very well could mean that Doggart goes free.

The way this case has been handled, from the media coverage to the criminal justice system’s actions, is again evidence of the double standard when it comes to terror plots by Muslims versus non-Muslims.  I truly am not sure how many more Charleston-type terror attacks need to occur before as a nation we collectively view threats from right-wing terrorists as seriously as those from ISIS and al Qaeda, especially given that right-wing actors have killed twice the number of Americans on U.S. soil since 9/11 as Muslim terrorists.

Sadly, it appears that more innocent people may be killed before that day comes.