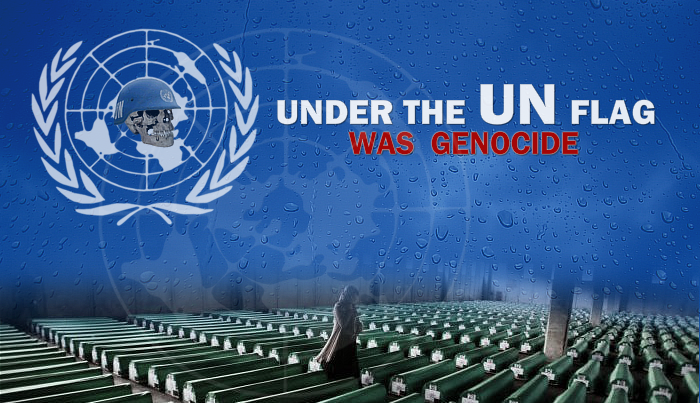 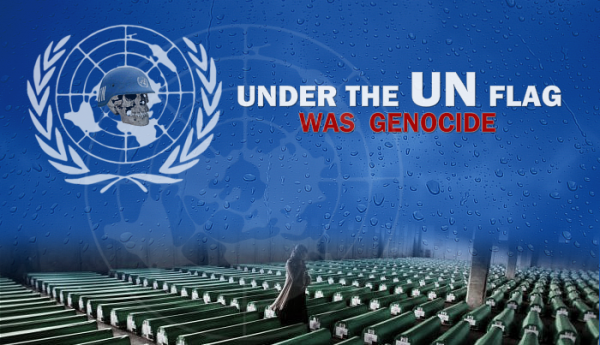 This week marks the 20th anniversary of the first European genocide against a religious minority since the holocaust of the Second World War. It was a genocide against the former Yugoslavia’s indigenous Muslim population starting in 1992, known as the Bosnia conflict. During a four-day period between the 11th -15th July 1995 eight thousand defenseless boys and men were slaughtered in cold blood and buried in fields of Srebrenica, as the Dutch forces of the UN looked on.

So how should it be remembered?  Well certainly not as some kind of politically correct government funded community cohesion exercise against extremism/hate, in which neither the victim nor the causes of the genocide are correctly identified as is currently being done.

If communities and school children are to learn about hate and the lessons for today from Bosnia, then they must be taught to relate it to the long tradition of European Christian anti-Muslim sentiment and hatred, the driving ideology behind the genocide.  Neither should we forget the complicity of European Governments in the crimes of the Serbs and Croats through protracted “peace” negotiations and anti-Muslim attitudes and policies.   These are also factors in the current rise in anti-Muslim sentiment and institutionalizing of discrimination against Muslims through policies such as Prevent.

Let’s not forget that the former Communist Yugoslavia also had a version of Prevent to suppress Muslim religious and political identity and expression.  Thought control operations run by state bureaucrats looked for signs /indicators of Muslim identity and imprisoned people for them.  State control of religion was the order of the day.

After the collapse of Communism the Muslims emerged by and large secularized and without their religious beliefs, whilst the Orthodox Christian Serbs and the Catholic Croats had retained a strong sense of religious identity. On one occasion I came out of Sarajevo Mosque, an elderly Muslim man realizing I was Muslim looked at me and said insight-fully “Serb Croat Deen dushman” (enemies of our faith).  In one short sentence he summed up the entire conflict.

It’s not that the West doesn’t know or understand this, they know it very well.  It’s just that they have a habit of sanitizing Christian crimes by re-writing and owning history, even other peoples suffering, especially if it is linked to their faith.  The Kings and Queens of Europe are renown “defenders of the Faith” a job they have done particularly well and passed on to national states.

As someone who was active and campaigned for the Bosnian Muslims in that period it’s important that today’s generation are not misled by Government sponsored official campaigns like Remembering Srebrenica (funded by the Department for Communities and Local Government).

The first point to recall is that at least two years prior to the outbreak of the conflict Slobodan Milosevic and the Yugoslav controlled media had launched an intense media drive against Muslims, not unlike the one being waged since 911 in the West; in which Muslims were presented as a threat, with their alien values not fitting in, taking over and trying to re-establish Ottoman rule. The Christian nationalists rallied the people to resurrect traditional values and history (i.e. pre Ottoman, pre Muslim) against the Muslims.   The policies, role and behavior of state, politicians, in collusion with media were instrumental in fueling fear, hatred, and suspicion between communities and identifying an enemy within.

Any campaign that still refers to the genocide against Muslims as “ethnic cleansing” is an affront to the memory of Muslims who were massacred, (even those of a secular disposition); not least because the victims themselves understood this hatred was directed against them because of their faith, or more accurately the faith of their ancestors. This was Muslim cleansing.

At the time I was regularly in the media and challenged the use of this term.  The Bosnian Muslims were not a different ethnicity, they were ethnic Slavs like the Serbs and Croats. They had converted to Islam at a point in history because as Unitarian Christians their beliefs were close to Muslims. Moreover, they had 60% inter marriage between communities. They were entirely integrated. When the conflict happened many of those responsible for the crimes including rapes of Muslim women and horrific slaughter were reported to have been lifelong neighbors. Good community cohesion and relations between communities does not it appear prevent people from carrying out evil atrocities.

Another striking feature with today is the role of neocon advice to the Conservative government at the time and Serbs.  Sir Alfred Sherman a prominent British ideologue was an adviser to Thatcher but also became a key adviser in 1993 to the Bosnian Serb War Criminal Radovan Karadic throughout the period. The neocons are the architect of today’s policies targeting Muslims being implemented by both Blair and Cameron Governments’, and one of the drivers of anti-Muslim media hostility.

The Serbs and Croats were enacting a very Christian inquisition.  The Serbs in particular were blessed by the Orthodox Churches in Russia and Serbia for their military mission and the Catholic Croats had their religious backers too.  The signs of religious hatred and persecution were to be found everywhere, demolished mosques, and destruction of anything Islamic in culture, architecture and history including Ottoman bridges, Sarajevo library with all its Muslim history.  Historic battles with the Ottomans were glorified.  Women in rape camps had crosses etched on their abdomens. In concentration camps Muslims were singled out for extinction with acts of religious violations and desecration.

Equally important in any remembrance of that event is the role played by European States.  They now champion themselves as the saviors of Muslims because they eventually intervened (when the Muslims were beginning to get their act together and retake territory).  However all their diplomatic and military policies at the time were contrived in such a way to allow the Serbs and Croats maximum time to achieve their goals.  They first slapped an arms embargo on the warring parties knowing full well that the only party that was unarmed and could not defend itself was the Bosnian Muslims.  Bosnian Muslims were left like lambs to the slaughter for the best part of 5 years.  By the time intervention was forced upon Europe by the United States, around 200,000 Muslims had lost their life.

So it was no surprise that the UN European soldiers supposed to protect the Bosnians simply stood aside and allowed the Serbs to execute 8000 in cold blood.  That not even a few of them could drop their orders and show some basic humanity is the question we really need to ask.  There is no doubt in my mind this was in part due to a shared affinity with the Christian side.

The irony is that whilst the West was prevaricating, allowing the Serbs and Croats time to complete their task, it was Muslims (who these days may be called radicalized extremists and terrorists) who were saving lives.  The Turks, Malaysians and Iranians were supplying the weapons and eventually fighters trained in Afghanistan came to help, long before the West did.   Muslims from all over the world brought in humanitarian aid often taking risks and driving conveys and trucks as individuals.  Muslims from Britain can be proud of the role they played in helping save Bosnian Muslim lives, as much as the British Government should be ashamed of their role. Read the memoirs and diaries of prominent politicians such as Foreign Secretary Douglas Hurd and US politicians Richard Holbrooke and Bill Clinton, and we find that Europe’s key aim was to prevent the creation of a Muslim State in the heart of Europe, not save their lives.

“Some European Leaders did not Want a Muslim State in Heart of Europe” Bill Clinton Memoirs “My life.”

Even here in the UK a kind of missionary zeal was evident. The Home Office handed responsibility for the Bosnian refugees mainly to local Churches. Most Muslims were kept away from Muslim communities and Mosques so they could not re -establish their Muslim identity. I wrote to the Government at the time, asking for locations but details were refused.  It is not surprising therefore that by and large Bosnian Muslim communities in the UK simply merged into UK life with little contact with the wider Muslim community.

The West achieved their goal.  When the settlement came, the Serbs got their Republika Srpska, the Croats got their state. The Bosnian Muslims got a revolving presidency and shared power with Serbs and Croats.  Each community took turns to govern, and a lesson in the need to be multi-cultural, not that they needed it.  They were the only community that have ever believed in it.  Bosnia today is a strange place where in mixed areas different religious groups go to the same school but by different entrances and play in different playgrounds. A place where people co-exist along with their hatreds whilst hatreds stored and delayed for the next time.

The key question that those attending the Srebrenica memorials should be asking are, why men like Milosevic, Maladic and Karadzic were never referred to as evil and mad, but as Serbian strongman and hard-man.  And if Muslims committing appalling crimes are symptomatic of an evil ideology and a conveyor belt theory, then why can’t we apply that equally to crimes committed by Christians. What was the ideology at work here and what did Christianity, or a twisted version of it, have to do with it?

For me the key lesson for Muslims is that you can be the most integrated Muslim on the planet, politically socially and culturally.  You can inter marry and you can reside in Europe for centuries but don’t think you will be safe.  And never make the mistake of solely relying on European states forces for your safety.  Nor think that the concepts of multi-culturalism, community cohesion, diversity, tolerance or even Dawah will ensure your safety.   If you do, your fate will be worse than that of the Bosnian Muslims, because most of us are not white.

As for those of you that think that Bosnia can’t come to Britain, don’t be so sure. The era of Yugoslav style communist state repression of Muslim religious and political identity and expression came into force on the 1stof July. Look at the rhetoric and policies of our politicians and establishment; the campaign to establish fundamental British Values; a cover for enforcement of Judeo-Christian values on Muslims; it is here. The rhetoric of British politicians is beginning to sound like pre conflict Milosevic, Mladic and Karadzic already.

Finally we must not allow a Government sponsored programme to create an official sanitized version of the Bosnian conflict devoid of genuine analysis and reality. We must take control of and write our own histories and sufferings, and we must remember the victims and tell the stories in our own way, just as the Jewish community has done.