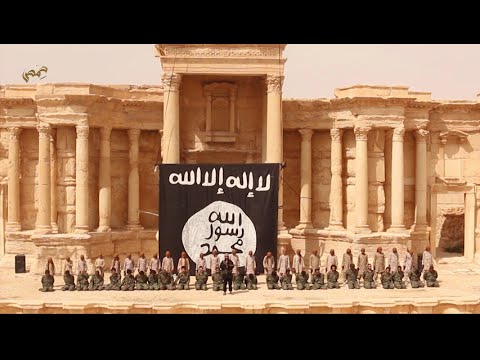 ISIS (ISIL/DAESH) has released a video showing 25 Syrian government soldiers being killed by teenagers in the ancient amphitheatre in the city of Palmyra.

The video – published on Saturday – documented a murder that reportedly happened shortly after the group captured the city on May 21.

Al Jazeera chooses not to use any visual material of the victims or the act of violence from the video.

It showed the soldiers in green and brown military uniforms being shot dead on the amphitheatre’s stage in front of an enormous version of the group’s black and white flag.

The killers all appear to be children or teenagers and are wearing desert camouflage and brown bandanas.

The killings are carried out in front of a relatively sparse crowd of men and some children watching from the ancient theatre’s seats.

ISIL reportedly carried out more than 200 killings, including civilians, in and around Palmyra in the period when it captured the city.

The killings in the Palmyra amphitheatre were first reported on May 27 by the Syrian Observatory for Human Rights, a Britain-based monitor, less than a week after ISIL captured the city.

At the time, Syria’s antiquities director, Mamoun Abdelkarim, said he feared the killings could signal the start of “the group’s barbarism and savagery against the ancient monuments of Palmyra”.

“Using the Roman theatre to execute people proves that these people are against humanity,” he told the AFP news agency.

The Greco-Roman ruins at Palmyra are listed as a UNESCO World Heritage Site, and the city’s capture by ISIL prompted international concerns for the fate of its ancient treasures.

So far, ISIL is not reported to have damaged the actual ruins, although it has blown up and desecrated Muslim graves in the city and destroyed a statue outside the Palmyra Museum.

ISIL has regularly released videos of its mass killings, with slick production and gruesome violence that experts say is a key propaganda tool for the group.