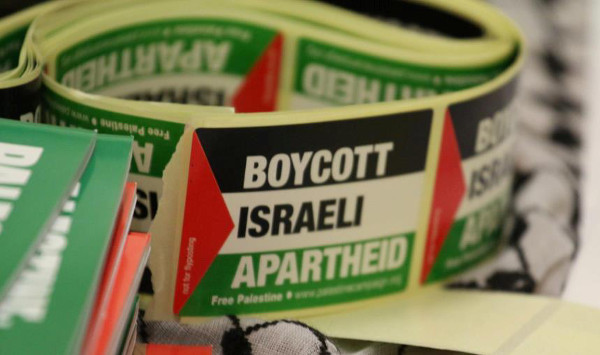 Not only the Israeli government but also the Zionist Lobby in the U.S. is going wild about the Boycott, Divestment, and Sanctions (BDS) campaign that is going to start to hurt the Israeli economy. The former minister of finance, Yair Lapid, addressing an audience at Manhattan`s Park Avenue Synagogue to held in the fight against “delegitimization” of Israel.

He used the same rhetoric against BDS that this campaign “is classic anti-Semitism in a modern disguise”. He continued dramatically: “The situation is getting worse. The tide is turning and either we turn it back now or it will sweep over us.” One can ask how long do people accept this worn out argument of anti-Semitism when the criticism is about Israel’s war crimes and the oppression of a defenseless people.

Opposition leader Isaac Herzog from the Zionist Union party told Israeli News Channel 2 that Benjamin Netanyahu is doing too little to “address the specter of anti-Israeli boycotts”. This Zionist anti-BDS struggle is supported by two filthy rich U. S. Zionists: Sheldon Adelson and Haim Saban. Both tycoons gave a joint interview to Channel 2 promising a “tsunami” against any company that dares to pull out from business with Israel because of BDS.

Media mogul Saban rejected the claim by French telecom company “Orange” that it did not pull out of Israel for political reasons as a “blatant lie”. Both billionaires will fight back “robustly” against “Orange that any other company with think twice boycotting Israel. According to CEO Stephane Richard, after a storm of criticism in Israel and U. S. American Jewish leaders, apologized for his comments and the commercially motivated decision and added that “he loves Israel”.

Saban’s threat against other companies was more than clear. “Any company that chooses to boycott business in Israel is going to look at this case, and once we’re done they’re going to think twice whether they want to take on Israel or not. Trust me this is just the beginning.” Sheldon Adelson hosted Jewish in Las Vegas in order to coordinate the anti-BDS actions on U. S. campuses what he calls the fight against “delegitimization and demonization of Israel”. Perhaps Lapid, Saban, and Adelson forgot that the policy of the right-wing Netanyahu government and its racist ministers are the best “delegitimizes” of Israel.

“You can blame the Palestinians for everything and obscure the simple fact that this brutal occupation is Israeli. You can tell the world that it all belongs to us because the Bible says so and believe that anyone will take you seriously. You can be sure that the memory of the Holocaust will serve us forever, and justify any injustice.”

And he added to the Adelsons and Sabans of the world:

“Of course, it won’t work indefinitely. It hasn’t worked in any country in history, no matter how strong and well-established, not even in the mightiest empires. Justice always triumphs in the end, even if very belatedly. And justice says that Israel cannot continue to tyrannize another people forever, even if Haim Saban himself lends his support.”

The Zionist Lobby sees “delegitimization of Israel” as an existential threat. The BDS movement seems even more dangerous than the non-existent Iranian nuclear arsenal. But the real problem is the Palestinian people. They are still in their country that the Zionist colonizers regard as theirs as many members of Netanyahu’s government mentioned recently.

The problem for the West is not BDS, which is overdue, but rather Israel’s “ethno-religious-supremacists” regime, which looks like an “Islamic State” disguised in Jewish garments.