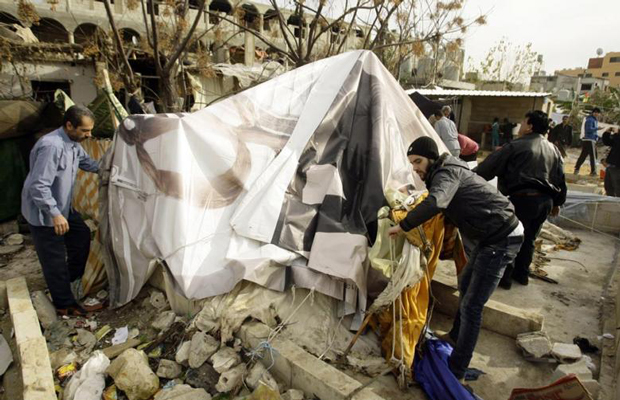 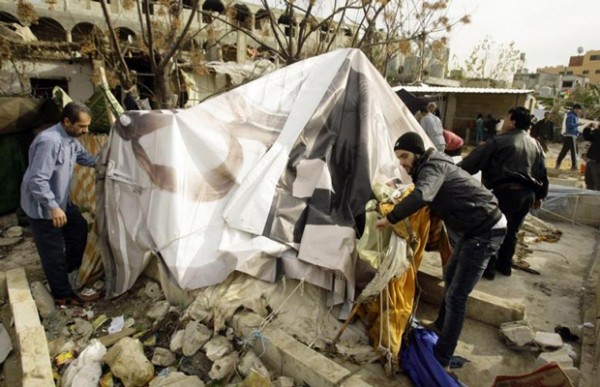 Lebanon’s 12 refugee camps have become more crowded since March of 2011, but in large numbers starting in mid-December 2012, when Yarmouk Palestinian refugee camp was heavily bombed. Between 70,000 and 90,000 Syrian-Palestinians have entered Lebanon and are staying mainly in Lebanon’s 12 refugee camps. Most were forced out of Syria because of persistent and accelerating civil-sectarian war, while others have left because of the lack of resources.

This young American had the privilege of speaking with Wisam, who has been living as a refugee in Lebanon since 2012. Wisam was born in 1986 in Damascus, Syria. Unlike many Syrian-Palestinians, who are often born in refugee camps, he was born in a hospital in Damascus. He is the middle-child of five, with three brothers and one sister. His father worked a bureaucratic position in the Syrian government, and his mother stayed at home with the children at their two flats in Almshtel near Seyeda Zeinab south of Damascus.

In Syria, Wisam did not face any discrimination for being Palestinian. He remembers being treated as an equal by Syrians and by governmental agencies. Like almost all Palestinians however, he did attend UNRWA schools and reminisced, with seeming nostalgia, about what he considers was a good education, reciting the general public view that UNRWA schools were often better Syrian state schools. In Syria, Wisam received no financial assistance for college, but tuition was amazingly affordable costing only $30 a year and between $50 and $100 a year for books. Wisam graduated from Damascus University in 2009 and earned his degree in English. Two months after graduating, he obtained a job at a hotel in Damascus, working as a receptionist.

With tensions building in Syria, Wisam considered leaving in March 2012, after receiving “Dafter Khedmet el Alam”—summoning him to join the Palestinian Liberation Army (PLA). This prompted him to apply for a declaration to enter Lebanon. He explained to me: “Syrians are able to enter Lebanon without tourist visas, but Syrian-Palestinians do need ID documents.” Within a month, on April 19th 2012, he left Syria for Lebanon.

Getting through the Syrian-Lebanese border was not difficult at the time that he crossed, but Wisam waited before the Masnaa entrance to Lebanon for two hours while the border officials questioned people. At first, he didn’t tell his parents what he was doing, because he knew they would disapprove since they wanted him to join the military. When they found out, they refused to speak to him for a month before coming to terms with his choice, deciding “that’s Allah”. Forty days after Wisam left, his family left Almshtel to stay with his grandmother, due to the eruption of fighting in their neighborhood between the Syrian Army and the Free Syrian Army.

“Compared to Syria, life in Lebanon is disgusting. Life is different in every way: with housing, schools, visas and work—especially work, since Palestinians are not permitted to work, and the majority relies on UNRWA’s modest hand-outs. Upon arriving to Lebanon, Wisam stayed in the north, as Baddawi Camp near Tripoli. After two and a half years, he moved to Shatilla hoping to get a job. At first, he was able to work at Shatilla Camp’s IRC (International Rescue Committee) as a social worker. As with many NGO’s in this region of conflict, the program he worked for was cancelled due to lack of funding. Wisam expressed liking his work very much. He worked with kids and had them participate in educational and fun activities. The program really helped the children, because they could socialize with peers and enjoy themselves instead of focusing on being separated from their families and their terrible current living situation.

Living in Baddawi camp for two and a half years, where he stayed among friends and their families, Wissam discovered many people staying in Baddawi camp have also fled Syria in the past four years, making it easier to connect to one another. For everyone living in Lebanon’s camps, friends and family are the most important part of enduring the hardship. Love, compassion, and unity are what sustain these communities as well as the desire to one day travel abroad and live with dignity. Besides friends, Wisam preferred Baddawi camp because it is less crowded and less chaotic than Shatila, quieter, cleaner, has better food and healthcare services and programs for children. He even thinks people overall, are nicer up north. He added, laughing, even the nargile (water pipes) are better.

Shatilla, Wisam says, is repulsive, because of the narrow streets filled with trash and puddles, higher rent for small apartments, and no fresh water, but instead salt water for showering. “But friends make it easier to endure,” and that seems to be true for anyone living in poverty. When first leaving Baddawi and venturing to Shatilla, Wisam thought it was horrible but gradually, after several months, he has adjusted to the “bad situation.”

Wisam is one of hundreds of thousands of people who have fled Syria. Many of his friends have also left Syria, having travelled to Lebanon, Turkey, Jordan, Iraq, Denmark, Sweden, Austria, Germany, and Malaysia. Some are able to work—especially in Europe—but the majority of his friends remain in refugee camps in this region.

I asked how his friends were able to get to Europe, as that is nearly impossible for most Palestinians. His response was “death boats” where people sneak onto boats and into the country they’re traveling to. It’s an uncertain adventure for those who try, but those who arrive safely approach a more optimistic life.

Regarding the turmoil in his birth country, I was curious about Wisam’s views on his president, Bashar al Assad. Wisam stated before he left Syria, he supported Assad, but now he doesn’t. Wisam believes that every group in Syria fighting for power is wrong, resulting in nothing but unimaginable civilian deaths. As for Palestinian politics, he hates all parties because they “play with people like toys” and never achieve anything. He provided an example about the well-known Yarmouk camp in Syria, explaining that no party serves the people; at least one person dies a day and children don’t have food or water.

When I asked Wisam about the future, he sighed and said it was unsure and obscure. Wisam is pessimistic about ever going to Palestine because he doesn’t think it’s realistic. Instead he dreams of immigrating to Europe, specifically Germany, because it’s an industrial nation and he wants to find a job.

At first, during the first two years after leaving Syria, Wassim wanted to go back, but because he would have to serve in the military, Europe is the better alternative. “Of course I made the right choice by leaving Syria,” he responded when I asked him, adding that he did not want to come to Lebanon, but it was his only option. Wisam hopes to find a job and leave Shatilla Camp, and just knowing he will eventually get out of Lebanon, sustains him.