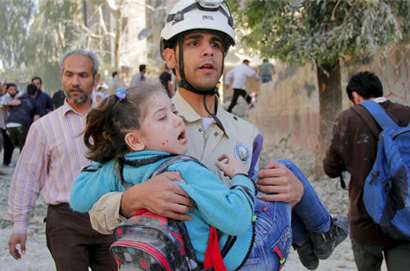 Air strikes on three adjacent opposition-held villages in northern Syria have killed at least 39 civilians, 17 of them children, according to a monitoring group.

Eight siblings were among the dead from Wednesday’s air strikes in Aleppo province, around 15km from the main highway south towards the capital, the UK-based Syrian Observatory for Human Rights said.

The Syrian government has been repeatedly condemned for its widespread use of barrel bombs, crude weapons made from oil drums, gas cylinders or water tanks, packed with explosives and scrap metal, and dropped from helicopters.

Besides the fatalities, dozens of civilians were wounded in the latest air raids targeting Aleppo, which involved both missile strikes and barrel bombs, the Syrian Observatory said.

Aleppo has been carved up into opposition- and government-held areas.

Elsewhere, in Syria’s Qalamoun mountain range, near the Lebanese border, eight Hezbollah fighters were killed in fighting with the Syrian opposition, reports on Thursday said.

Syrian government troops, with the help of Hezbollah, began offensives against the Nusra Front and the Islamic State of Iraq and the Levant (ISIL) group in Qalamoun at the beginning of May.

Earlier reports by the Syrian Observatory said government helicopters had dropped barrel bombs in a neighbourhood of Aleppo city on Tuesday, killing at least 15 people.

The group said at least 20 people were killed and 30 others, including women and children, were wounded in the attack, which hit near a bus depot.

The Local Coordination Committees, another monitoring group, said at least 15 people were killed in Tuesday’s attack on the Jisr al-Haj neighbourhood.

Both the Syrian Observatory and the Local Coordination Committees are based outside Syria but rely on a network of activists on the ground.

The Aleppo Media Centre, based in the city, said at least 35 people were killed.

The reports of bombardment and fighting could not be independently verified by MWC News.