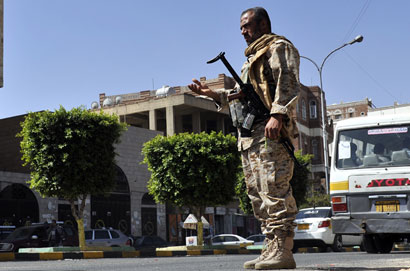 Houthi officials have called on their fighters to be on alert as a power vacuum emerged following the resignation of President Abd-Rabbu Mansour Hadi.

Hadi, a former general, has blamed the Houthis’ control of the capital Sanaa for impeding his attempt to steer Yemen towards stability after years of secessionist and tribal unrest, deepening poverty and US drone strikes on fighters.

The president’s resignation on Thursday startled the Arabian Peninsula country of 25 million, where the Shia Muslim Houthis have emerged as the dominant faction after seizing Sanaa in September and dictating terms to Hadi, whom they had held as a virtual prisoner at his home residence after clashes with security guards this week.

Prime Minister Khalid Bahah also tendered his resignation on Thursday, saying he did want to be part of the collapse of the country.

Anti-Houthi protests took place on Friday in Sanaa, Aden, Taiz, Hodiedah and Ibb with protesters describing the Shia fighters’ actions in the capital as a coup.

Some Houthi officials have welcomed Hadi’s resignation but the group said an official position had yet to be taken, the Reuters news agency reported. The group urged the army to uphold its responsibilities and called on Houthi fighters to be on alert.

The Houthis said the constitution stipulated that Hadi’s resignation should be approved by an absolute majority in parliament.

“As this has not happened, the resignation remains pending,” the militia said in a statement on Friday.

A senior Yemeni official told Reuters that the Houthis had proposed the creation an interim presidential council to run the majority Sunni Muslim country, but an alliance of parties rejected the idea.

Parliament is scheduled to meet on Sunday to discuss Hadi’s resignation and can accept or reject it.

Under the constitution, parliamentary speaker Yahya al-Ra’i takes office for an interim period while new elections are organised.

The fall of Hadi’s Western-backed government raise fears of chaos engulfing Yemen, strategically located next to oil giant Saudi Arabia and on the key shipping route from the Suez Canal to the Gulf.

UN Secretary-General Ban Ki-moon was “seriously concerned” by the developments and called on all sides “to exercise maximum restraint and maintain peace and stability”, his spokesman said in a statement.

The UN’s envoy to Yemen, Moroccan diplomat Jamal Benomar, had arrived in the country on Thursday for talks with the political rivals, but they were swiftly overtaken by events.

In Washington, State Department spokeswoman Jen Psaki said the US was assessing the fast-moving situation.

“We continue to support a peaceful transition. We’ve urged all parties and continue to urge all parties to abide by … the peace and national partnership agreement,” Psaki said.